A weekend of food 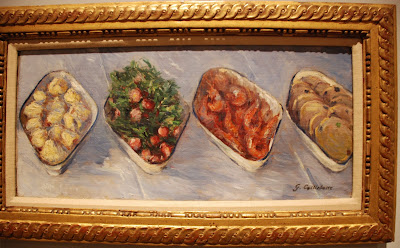 On our visit to the Indianapolis Museum of Art on Saturday, we enjoyed this painting of hors d'oeuvres by Gustave Caillibaut. But of course you want to hear about our Thanksgiving dinner: 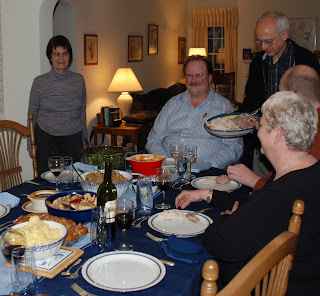 Elaine cooked a fabulous meal entirely according to tradition. Maybe we were obligated to make up for Evelyn's decision to have fondue and trifle for her Thanksgiving dinner!

While Larry carved, Lenny made a fabulous glossy dark sauce for the turkey and stuffing, which Elaine had started the day before, and which she and I worked on for quite a bit of the day.

Elaine is really good at planning, and I joined in with the scheme. She had made one pot of stock from the neck and giblets on Wednesday. We used this for the stuffing. She'd also left the bread out to dry some overnight, and we seasoned it from her brand-new jar of poultry seasoning. 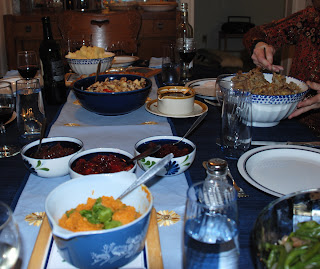 While we were cutting up celery, onions, and carrots, we also put aside a baggie full of chopped veggies for later making stock. As Larry carved, he put the bones right into a big pot. It cooked overnight. Saturday we used the fantastic stock for French onion soup for lunch. I realized that French onion soup is almost a Thanksgiving tradition -- for later in the weekend. It's the moment when we have great stock every year. 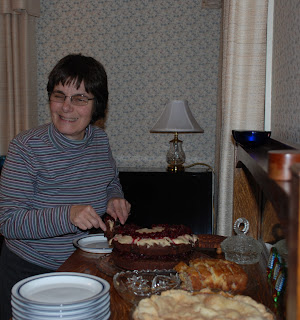 For Thanksgiving dessert, we had two pies and a chocolate cranberry cake. By that time, I was only able to eat one small piece of apple pie. Elaine makes the best apple pies I know of.

I think everyone had a fantastic time at Thanksgiving dinner. We had plenty of pie and apple salad left over for breakfast on Friday, too, before heading for Indianapolis (around an hour's drive through Hoosier fields past industrial areas, and into the city).

At the Museum Friday, we ate an entirely unmemorable cafe lunch, and of course had a full plate of leftovers for dinner Friday night, all very traditionally oriented, of course.

By Saturday night -- after the French onion soup lunch -- we were ready for a restaurant. Is a Chinese dinner part of Thanksgiving tradition? I don't know. We ordered shrimp with walnuts, moo-shu pork, fish with black beans, and a dish of green beans (despite the green beans we had eaten for Thanksgiving). 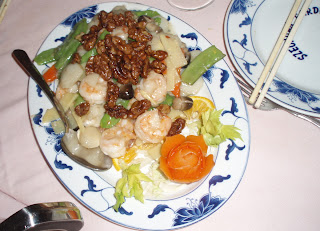 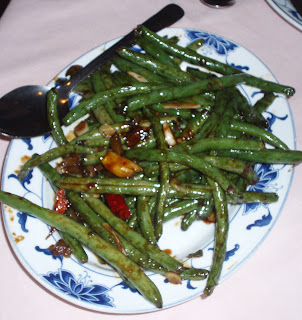 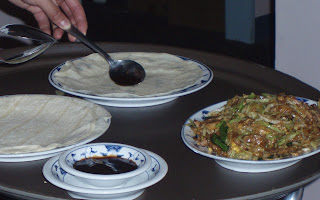 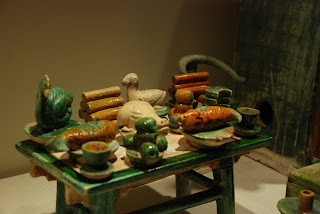 Food has obviously been very important to the Chinese for a very long time. In the Han Dynasty, more than a thousand years ago, the dead were sent off with a vast number of preparatory statues to accompany and serve them: including food. This selection, which we saw in the museum, includes a number of items, including a boar's head. An oven for cooking it is off to the side.
Posted by Mae Travels at 5:09 PM