I really like falafel, especially those Israeli falafel sandwiches with a pita stuffed with hot little deep-fried balls of chick peas, salad, tahini sauce and sometimes even french fries. My favorite falafel source used to be a little food stall on Rue des Rosiers, the old Jewish street in Paris. I've eaten it in the Arab neighborhood of Dearborn, Michigan, at Ann Arbor's Jerusalem Garden Restaurant ... all over.

Falafel, I understand, is popular throughout the Middle East as well as with Israelis. In Israel it's sometimes called Yemenite falafel. The Israeli version is supposedly of Egyptian origin. Yemenite Jewish food-stand owners created their own version, though it wasn't part of their cuisine before they left Yemen. I imagine every national version has its own story. 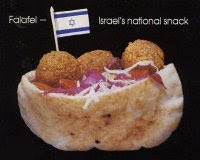 A few weeks ago, when many sources cited an article called "FBI Hoped to Follow Falafel Trail to Iranian Terrorists Here" by Jeff Stein, I was amused. Here's an excerpt from the story:

"Like Hansel and Gretel hoping to follow their bread crumbs out of the forest, the FBI sifted through customer data collected by San Francisco-area grocery stores in 2005 and 2006, hoping that sales records of Middle Eastern food would lead to Iranian terrorists.

"The idea was that a spike in, say, falafel sales, combined with other data, would lead to Iranian secret agents in the south San Francisco-San Jose area.

"The brainchild of top FBI counterterrorism officials Phil Mudd and Willie T. Hulon, according to well-informed sources, the project didn’t last long. It was torpedoed by the head of the FBI’s criminal investigations division, Michael A. Mason, who argued that putting somebody on a terrorist list for what they ate was ridiculous — and possibly illegal.

"A check of federal court records in California did not reveal any prosecutions developed from falafel trails." [Note: when you read on, you'll understand why the link might eventually not point to the same story!]

Yesterday, the FBI made a statement on the matter of Falafel Terrorism, signed by John Miller, Assistant Director, Office of Public Affairs:

"We at the FBI were surprised to read about a supposed FBI program to monitor the sales of Middle Eastern food products in the San Francisco Bay area in support of counterterrorism intelligence gathering (“FBI Hoped to Follow Falafel Trail to Iranian Terrorists Here,” November 2, 2007).

"Having never heard of this, I spoke to the counterterrorism managers, who in the story were identified as having hatched the plan, as well as everyone else who would have had any knowledge of it. Nobody did. ...

"While the story may have been the source of some amusement, I appreciate the opportunity to set the record straight on something that touches on something so important as national security and civil liberties."

Yes, as I said, I was amused at the idea of who would be entrapped by a net around falafel eaters -- including me. But not particularly including Iranians -- Persian cuisine is a fine and wonderful one, but not part of the Middle Eastern tradition that includes falafel. I expect that the vast number of bloggers and others who have responded to the first article covered this in great detail.

At any rate, I would have thought a journal called "Congressional Quarterly" had better standards. The FBI press release lists the CQ article as "too ridiculous to be true." I'm eagerly awaiting further crossfire between the parties to the claim. (I learned about the FBI press release in Quote: Dept. of Too Juicy to Be True from the New York Times blog The Lede.)
Posted by Mae Travels at 1:17 PM