This morning I contributed some canned goods to a drive at the center where I take my aerobics class. On Thanksgiving morning the instructors traditionally do a workout session where the price of admission is a donation of food. (At times in the past, people used the cans as weights in the workout, but they don't do this any more.)

Again this year I'll be out of town -- in fact, I've never been in town for the Thanksgiving workout. But I brought my Campell's Tomato Soup and a couple of others. And I think of all the school plays where children dressed as Pilgrims bringing in "a canned good." And students at the door to collect food for the needy. Our local food banks this year have announced greater need than they've ever seen, thanks to many unfavorable economic trends. Food Gatherers, the main Ann Arbor food bank, ran out of food for the first time this summer, according to their Christmas appeal. 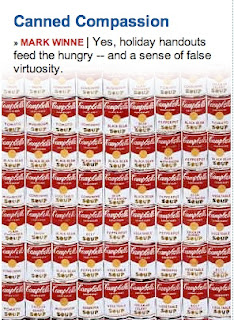 Last year, a physician acquaintance told me that we should bring canned vegetables to offset the more commonly contributed items like my soup or the often-contributed spaghetti. I didn't get to an appropriate store this time, so I had to bring what I had on hand already -- but I've tried to learn from her.

I believe that most recipients are truly needy, and that anyone lucky enough to have adequate food can help them. Contributions of money are also part of the commitment that I make and that I think other fortunate people should consider. We need to count our blessings: and share them. I think I'm in the mainstream on these feelings towards food banks, soup kitchens, and distributors of food packages.

Earlier this week, the Washington Post ran an article by Mark Winne, who is the former director of Connecticut's Hartford Food System. Winne explained why he thought this was not the right approach. He wrote that food banks and food drives cause us to "continue down a road that never comes to an end. Like transportation planners who add more lanes to already clogged highways, we add more space to our food banks in the futile hope of relieving the congestion." Instead, he says: "We know hunger's cause -- poverty. We know its solution -- end poverty. Let this Thanksgiving remind us of that task." 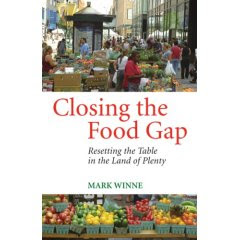 Well, he makes it sound simple. I wonder -- Winne has a book coming out early in January: Closing the Food Gap: Resetting the Table in the Land of Plenty. I'll try to read it to find out how he thinks the solution to this problem should be approached.

I assume that in the current conditions -- that the poor are hungry, and we can help by giving them food -- he doesn't just think we should ignore the problem the way that Herbert Hoover did, for ideological reasons, at the beginning of the Great Depression. The question of where to start and what to do about poverty seems really daunting to me. I find it hard to criticize the direct help that's been the approach for thousands of years. I don't think that the article is convincing in its claim that people will not fight poverty if they are giving food to food banks. I think it might make them more apt to favor solutions to poverty.