The Food they Never Tasted 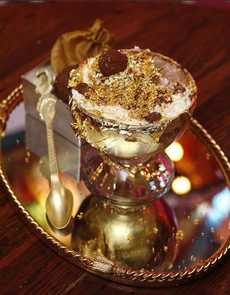 In Hungering for America, Hasia Diner tells of the starving Irish, who never tasted the delicacies that their native land produced. While the English ate Irish bacon, the Irish had rotting potatoes. Diner describes the effect of this on the Irish immigrants once they got to America. Irish women who became cooks in America were expected to cook according to food traditions to which they had no personal commitment. I summarized this in my post yesterday.

Today, I suddenly had a moment of connection with this as I read a newly-posted essay by Barbara Ehrenreich, about excesses in New York foodie places. The restaurant Serendipity3, Ehrenreich points out, recently created a $25,ooo dessert, "Frrrozen Haute Chocolate," containing edible gold, truffles, and ultra-premium chocolate. (Ehrenreich is more restrained, but I googled until I found the picture at right showing what a $25K dessert looks like.)

A week after setting a Guiness record for costliest dessert, Serendipity3 received a visit from health department inspectors who found: "a live mouse, mouse droppings in multiple areas of the restaurant, fruit flies, house flies, and more than 100 live cockroaches."

Ehrenreich's article juxtaposed these facts to highlight more general issues. She writes of "the inevitability of cockroaches in a world divided between rich and poor and served by a public sector in a state of bad decay." She discusses workers and kitchen conditions in New York's fanciest food establishments. She mentions how Whole Foods and Balduccis offer a buffet of stunning-looking food, but it doesn't taste all that good. Here is her conclusion -- look at the parallels with the starving Irish!

But there could be something else behind the consistently bad prepared food at these upscale sources: Many, if not all, of the people doing the cooking behind the scenes are making foods they are unlikely ever to confront in real life. Ask a Salvadoran immigrant to whip up chicken masala and he or she will no doubt follow directions, but in complete ignorance of the desired taste. One of the women working at the Balduccis I have patronized has only one visible tooth in her mouth, which in addition to speaking ill of the store's dental benefits, means she can never have bitten into one of the lamb burgers she sells. [From Roaches in the World's Most Expensive Dessert posted November 19, 2007.]