Continued review of The Fortune Cookie Chronicles by Jennifer 8. Lee. Chapter 7: "Why Chow Mein Is the Chosen Food of the Chosen People; or, The Kosher Duck Scandal of 1989." 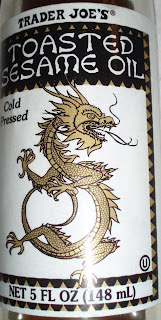 Before I sat down to formulate my thoughts on connections between Jews and Chinese food, I searched my pantry for Kosher Chinese products. Out of several jars and bottles, two displayed the Kosher certification mark (the OU and the OK symbols at lower right in both pictures). My chili garlic paste, hoisin sauce, and rice vinegar had no such marks. Nor did Japanese ponzu or Thai fish sauce, but they're not Chinese anyway. 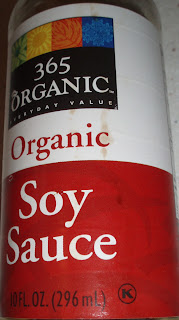 I guess this is evidence for the obvious: Jewish cooks make Chinese food. As Lee points out, there are lots of non-obvious things about the love of Jews for Chinese restaurants. Early in the 20th century, she points out, Jews and Chinese as immigrant groups lived in neighboring New York areas. Both were non-Christians in a Christian land, and they shared their non-observance of major holidays. This leads to one traditional Jewish Christmas dinner -- having Chinese take-out or dining in Chinese restaurants. Why? All the other restaurants are closed.

Further, Lee claims that as a dairy-less cuisine, Chinese cooking is easier to make simultaneously authentic and kosher. My adventure in the pantry makes me doubt this: the lack of kosher condiments would be as challenging as separating milk and meat. Vegetarian/dairy pizza and pasta are also kosher favorites. Not to mention the ubiquity of shellfish and pork in Chinese food -- though the old joke has it that anything is kosher in a Chinese restaurant. I'd look further for an explanation.

Lee traces references to Jewish-Chinese dining to 1928, citing a secondary reference to an article in Der Tog, a Yiddish newspaper. I think this was probably the article "The War between Chop Suey and Gefilte Fish," cited by Hasia R. Diner in the book Hungering for America: Italian, Irish, and Jewish Foodways in the Age of Migration. Diner's study has an even earlier reference to Jewish-Chinese food links. She writes that the Jewish pattern of "going out to Chinese restaurants emerged quite early. In the 1890s the American Hebrew, a magazine oriented to the English-reading middle-class traditional Jews reported on the trend and criticized it." (p. 2o5)

The Kosher Duck Scandal of the chapter's title gets a lot of attention. For me, it's the least interesting part of the whole book, as it's really more about competition between Jewish groups and interests that aren't part of my life. In keeping with Lee's wide-ranging interests, though, she does document the role of Jewish entrepreneurs in such areas as producing the small packets of soy sauce that come with Chinese takeout and even in occasional ownership of Chinese restaurants. I think there's a lot of material on Jews and Chinese food that could be explored. I hope Lee will get to it in some future book, but skip the minutia of kashrut and its politics.

The bond between Jews and Chinese is deeper than food, I think. In the chapter titled "American Stir-fry" Lee discusses the question of Chinese identity. She discusses the word hua, "the distilled essence of being Chinese." This concept ties together Chinese throughout the world, no matter what language or culture they have adopted or how little of the Chinese language they know: "as though one day we all might return, as though departure from the homeland is only temporary, even if it may last for generations upon generations." Sound familiar, anyone?

In the fiction of author Gish Jen, another second-generation Chinese-New Yorker, Jews and Chinese people have startlingly many things in common. Jen's book Mona in the Promised Land creates Mona, a wonderful Chinese-American teenager. The book is a very funny story of her life and effort to convert to Judaism. It's another way to look at this same interesting question. Like Hasia Diner, I think fiction is a wonderful source for understanding immigrant experiences, though not one that The Fortune Cookie Chronicles is based on.
Posted by Mae Travels at 1:38 PM

Hi Mae, I saw your comments on Lydia's site about non-rhotic english and was tickled! About the Chinese Jewish connection I agree there must be more there. There is a product called Soy-Vay more or less a Kosher teriyaki sauce. Your blog looks v interesting keep up the good work!

Thanks to Callipygia for the comment. She was responding to a post I wrote on the blog www.theperfectpantry.com -- she also has a food blog which is interesting.