Thoughts on reading The Fortune Cookie Chronicles by Jennifer 8. Lee.

How many ways of looking at a Fortune Cookie? Jennifer 8. Lee found more than thirteen. For starters, she looks at the famous incident where the "Lucky Numbers" repeated on fortune cookies distributed far and wide by Chinese restaurants randomly predicted a winning Powerball jackpot. Instead of a handful of winners, 110 people claimed at least $100,000. As a start into the world of Chinese restaurants, Lee traveled to the places where the winners live and eat Chinese food. Cool idea!

As she looked at the fortunes of fortune cookies, Lee offered all kinds of information about American Chinese restaurants. Using restaurant industry journals and interviewing suppliers, she explored the economics of these small businesses. Based on legal records and interviews, she illustrated immigration issues. The customer's side of the story came from some of the interviews with the Powerball winners, as well as from food-history writers. She even discussed the effort for international regulatory control of soy sauce!

A major appeal of The Fortune Cookie Chronicles is learning about the perspective of the immigrants who own, run, and staff Chinese restaurants. Or one might say, slave in them. In "Waizhou, U.S.A." she tells the story of John and Jenny, immigrants who bought a Chinese restaurant in a tiny Georgia hamlet (pop. 850) and their painful experiences. What seemed normal treatment of their three children to Jenny and John, looked otherwise to well-meaning authorities. They temporarily took the children into foster care and even arrested the parents for a time. The story ends ambiguously: the family returns to New York and then disappears so that neither Lee (who had been periodically interviewing them) nor local Georgians (who had rescued them from their legal problems), could find them.

Most recent immigrants who have later owned and worked in Chinese restaurants throughout America start in New York -- including Jenny and John -- says Lee. Most come from one area of China. From the immigrant perspective, there's New York and everything else: the name for the rest is Waizhou. Not only did she visit many restaurants in the South and Midwest, Lee visited the villages and cities of China where restaurant workers primarily originate. She's especially effective at all this because of being bilingual. The much longer history of San Francisco Chinese restaurants receives less attention in the book, mostly in the search for the origin of fortune cookies. 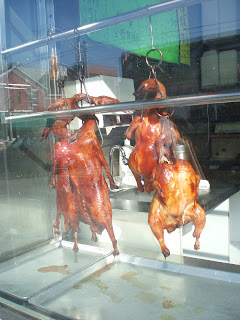 Besides the cultural and economic aspects of Chinese restaurants, Lee discusses the ways that people look at food. Americans, says Lee, have a very different philosophy of eating. We learn how completely adapted Chinese restaurants are to American tastes. For starters, there's a detailed look at both chop suey (more than a century ago) and General Tso's chicken (recent): dishes that, like fortune cookies, are virtually unknown in China.

The differences in cultural food preferences that Lee explained were especially enlightening, I thought. In America, she says "what goes into the mouth should never come out. That is, there should be nothing where you have to chew on something and then spit out an inedible part. This means no chicken feet, no fish with bones, no shrimp with shells. Peanuts come shelled, and even watermelon is preferred seedless."

She contrasts this to Chinese native habits: "the aftermath of most restaurant meals is a pile of bones, shells, and other detritus on the table at every place setting." She explains the Chinese love of whole shrimp "with the eyes and tails still on," of chicken feet and legs with lots of bones, and their disfavoring of the American favorite, boneless chicken breasts -- tasteless and bland.

From my personal experiences with Chinese food (like my photo of the ducks in Toronto Chinatown), I had always thought that the difference was that Chinese food was always cut up bite sized, ready to put in your mouth with chop sticks. I also always thought of Chinese food as full of exotic vegetables, while Lee emphasizes the overuse of broccoli. When I've had duck, in fact, even that was served in little slices. American food differed -- I thought -- because it came in big slabs like steak, requiring a knife and fork. My understanding of the difference was that the Chinese didn't want to fool with food at the table. But I had it almost backwards!

Lee looks at American Chinese restaurants both individually and collectively. Although there is no central organization (such as the huge corporations maintaining the consistency of MacDonalds or Burger King) she says "at times it seems that America's Chinese restaurants operate as a single giant, pulsing entity, a lively example of one of the most fertile research areas for biologists, sociologists, and economists: spontaneously self-organizing networks. The principles that govern ant colonies, slime molds, and the growth of the Internet also extend to Chinese restaurants; from local actions emerge collective wisdom."

One more thought: it's interesting to read a proof copy -- reminds me of my days in various types of publication jobs. Many typos show that it still needs proofreading, which I'm sure it will get. The notes all refer to "page 00." This shows me that the publishers' text processing software doesn't automate cross-referencing -- odd, such software has existed almost as long as the author herself. An index (if one is to be) must be in progress. I hope they have good software for that!

My next post will cover what The ... Chronicles has to say about Jews and Chinese Restaurants!
Posted by Mae Travels at 9:05 AM