Two Books: "Paradox of Plenty" and "Hungering for America" 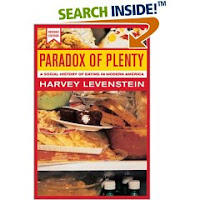 I recently read two books on the history of food in America.

Paradox of Plenty: A Social History of Eating in Modern America (revised edition, 2003) by Harvey Levenstein is very often quoted. It's encyclopedic. Decade by decade, it discusses food trends, the food industry, the politics of food, the growth of fast food, and fads in fine dining. Beginning with the era of the great depression, it catalogs both food and hunger -- though he finds more paradoxes than just simultaneous gorging and starvation.

Leverstein's sources include newspaper clippings, food industry publications, restaurant reviews, reflection of food and body image in TV and film, and many other popular cultural sources. The overwhelming detail in each chapter makes this more of a source book for study of something more specific. The notes are very detailed, so you could probably go to his sources to learn more. However, the net result is not a good read. It just doesn't focus enough.

Hungering for America: Italian, Irish, and Jewish Foodways in the Age of Migration by Hasia R. Diner (2001) approaches food history in a different way. I especially appreciate the author's use of fiction and personal memoirs as a source of information. (I mentioned this in an earlier blog post.) For each of the three groups -- Italians, Irish, and mainly Eastern European Jews -- Diner presents the foodways of their place of origin. She discusses the meals that were served at Ellis Island. For each group, she illustrates how adjustment to America affected foods that the group eventually "owned" in America.

In her discussion of how "Italian" food in America was different from the many regional cuisines of Italy I found quite a few interesting facts, though some points weren't so surprising. Even as a teenager, eating pizza for the first time at a restaurant called Rinaldi's, I was told that it was really an adaptation to American taste. My more sophisticated friends said that if I ever went to Italy, no pizza would be on the menu.

My friends, in fact, were wrong. By the time I went to Italy, American-style pizza had been adopted by the Italians. Pizza in Italy wasn't an obscure street food any more -- though it was still different from Rinaldi's pizza. Similarly, spaghetti with tomato sauce and meat balls, certain kinds of sausage, and a few cheeses were much more prominent in American than in regional Italian cooking, said Diner. She clarifies the process by which the food became defined as "Italian."

As for the Irish, Diner makes the case that she scoured every possible source, and found that the Irish immigrants had no particular empathy for the cooking of their former land. The unbelievably harsh policy of the English colonial masters had left them in such terrible food need that when the potato crop failed, they starved while Ireland was still exporting bacon, vegetables and many other foods that they had never in fact tasted. The bitterness over this experience possibly left them indifferent to food until later in their American experience. Beer and whiskey, yes, Irish bars and saloons, yes, but corned beef and cabbage didn't became Irish until almost 100 years after the main immigration.

Another interesting comparison of the groups in Diner's book shows how immigration patterns affected foodways. Many more Italian men than women immigrated to the US. Many more Irish women than men immigrated . Among the Jews, the pattern was for whole families to immigrate together. Diner's discussion is very specific about the results of this difference.

Irish women, she showed, worked as domestic servants. Stereotyping and negative attitudes of popular writers characterized the Irish cook as "Biddy." They deprecated her skills and her attitude. This was another factor that deterred the development of an Irish-American cuisine -- the first contact with food here was for so many learning to cook other people's food. Italian laboring men, in contrast, often lived together and cooked together. Also, eventually, Italian restaurants adapted their foods to broader American tastes.

Diner's treatment of the attitudes towards food in the shtetls of Eastern Europe was particularly interesting. Even the poorest Jews, she felt, were enabled to have an attitude of deserving to eat well. She discusses "eating days" where Jewish students would be fed by volunteer families one day each week, because they felt an obligation to learning. I don't have time to summarize this very interesting piece of scholarship.

I enjoyed reading both books. I've hardly done them justice in this short summary.
Posted by Mae Travels at 3:38 PM