"Now come on. Sit down. I'm going to tell you a story. It's about Pooh who was a little bear, and Christopher Robin who was a little boy. And Piglet who was a little [pause] piglet. ... One day when Pooh Bear had nothing else to do, he thought he would do something, so he went round to Piglet's house to see what Piglet was doing...."

It turns out that A.A. Milne also wrote a really amusing country house mystery. How could I have limited my reading to just one of his works? Although this book has probably been reviewed hundreds of times in its almost 100 years, I'll tell you about it. 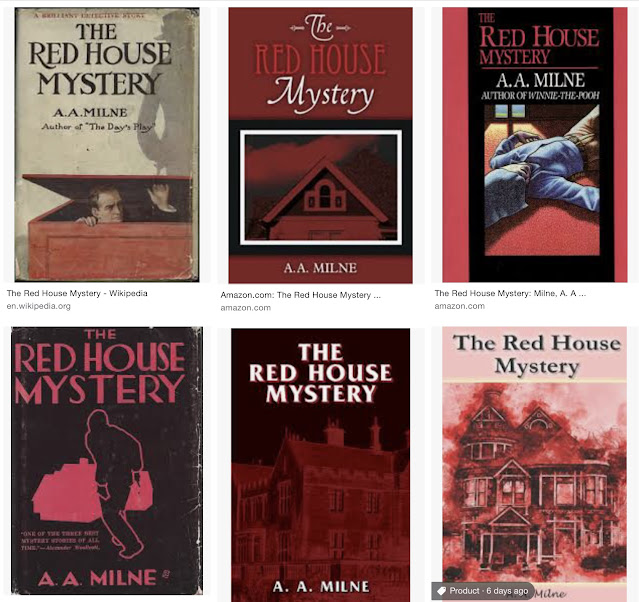 The Red House Mystery was published in 1922, and has gone through numerous editions. It has every feature you could expect in a mystery involving the monied classes in England at that time. The characters themselves frequently refer to the detecting powers of Holmes and Watson, but it really has a different feel than Arthur Conan Doyle's stories, which were still appearing at the time Milne wrote.

I suspect that The Red House Mystery may have been one of the first novels to incorporate a number of now-pretty-standard elements. After all, Agatha Christie's first detective story, The Mysterious Affair at Styles, was published only two years earlier, in 1920. And Dorothy Sayers' first detective story, Whose Body? appeared in 1923.

The setting is "The Red House," a perfect English country house, with "dining-room, library, hall, billiard-room and office rooms” (p. 67) on the first floor, bedrooms and bathrooms above, servants' quarters below, and extensive gardens and woodlands.  A very pleasant-seeming house. As one character says:

“I don’t think I know any house where things are so comfortable. One’s room — the food — drinks — cigars — the way everything’s arranged: All that sort of thing. They look after you awfully well.” (p. 40).

Typically, the day begins with breakfast -- the expected English breakfast, as served by the maids and eaten by several guests staying in the house. Milne writes: "Let us have a look at them as they came down to that breakfast.... [One guest] inspected the dishes on the side-table, decided carefully on kedgeree, and got to work on it. He had passed on to a sausage by the time of the next arrival. ... [Another guest] greeted them and sat down to toast and tea. Breakfast was not his meal." (p. 8-9)

Later in the day, the action begins: a mysterious murder victim is found lying on the floor of a semi-locked room. A naive never-before-involved-in-detecting amateur happens on the scene just at the moment when the murder takes place. Action! Police called! Superfluous guests sent back to London on the next train.
Detecting continues apace, over several days. The police are predictable and not-too-bright. There's a discovery of a secret passage in the library. There's a charming young lady who might have been planning to marry one of the people involved. There are the usual number of gardeners, caretakers, parlor maids, and a housekeeper to be interviewed. There are many discrepancies in the evidence. The suspense builds beautifully, with various nighttime adventures and daytime excursions into the nearby village.
About the amateur detective -- he's very remarkable in being able to concentrate his mind on something he's seen, and recall all the details. He works with a bright but not-so-great-at-detecting companion, and explains his moves. To the companion, he describes his main talent, which is perfect for detecting:

"I have got rather an uncanny habit of recording things unconsciously. You know that game where you look at a tray full of small objects for three minutes, and then turn away and try to make a list of them. It means a devil of a lot of concentration for the ordinary person, if he wants to get his list complete, but in some odd way I manage to do it without concentration at all. I mean that my eyes seem to do it without the brain consciously taking any part." (p. 49).

Of course he solves the mystery, the police having become useless: the ending is really pretty surprising. In short, it's a delightful read. I think it has some of the humor and spontaneity of my childhood favorite stories of Winnie the Pooh.

I'm ashamed to say I've never read Winnie the Pooh... but I saw the Disney adaptation. I love the sound of that Red house classic detective story of the early 20th century, just the kind of books I'm in the mood to read :)

Thank you! I've just borrowed the eBook from our library. Sounds like a fun read!

Winnie the Pooh is rather unpopular over here... We have Grimm´s fairy tales. Or Wilhem Busch...

I used to read Winnie the Pooh to my kids.

Who knew that A. A. Milne had written a mystery? Completely new to me. I've been a fan of Pooh and his companions since I first read Winnie-the-Pooh, but, oddly, that was not as a child, but as an adult. His characters are remarkably childlike and real. I wonder if his mystery characters are as charming.

We've read Winnie the Pooh quite a bit and I have the books still. Will send them to my granddaughter one day. I did not know about the mystery books.

Our daughter used to like Winnie when she was real young.

I'm a fan of the Winnie the Pooh books but didn't know Milne wrote mysteries. The Red House Mystery is online, and I'll check it out. Thx!

I have never read Winnie the Pooh, but I would LOVE to read The Red House Mystery, You make it sound so interesting and SO British.

I didn't know A.A. Milne wrote a mystery. Of course writers write all kinds of things. I love Winnie the Pooh, and I also had an old record (33) that told the stories. I'd forgotten about that until your just mentioned it. I am going to check out this mystery. Thanks.

I'm going to look for this book in my reader app. Thanks for the review.

Thanks for your kind visit to my blog. Have a nice Sunday! :)

I never knew A. A. Milne had written mystery books. I'm very familiar with Winnie-the-pooh having read books to my kids when they were young.

I’ve read Winnie The Pooh! I knew about The Red House Mystery, but I never picked it up for some reason. I’m glad you liked it. I hope you have a great week!

Aj @ Read All The Things!

Count me among the many who have limited their A.A. Milne reading to the beloved Winnie-the-Pooh. This mystery sounds like a delightful read... thanks for bringing it to my attention.

I had no idea that Milne wrote mysteries. Was it before he went off to war? I saw a movie about how he started writing the Winnie-the-Pooh series and it sounded like the war had made him have writer's block.