How to find a bad restaurant

Right now, restaurants in London, Paris, and most big US cities are dark and dismal places, closed temporarily or unfortunately, often for good. Restaurant critics -- along with chefs, waiters, sommeliers, and so forth -- have had to find other work. The future might hold better luck for them and for us. Maybe we will be able to eat out again in the not-too-distant future, maybe even while traveling to England or France where I've definitely enjoyed many good meals. Meanwhile, I have books to read. 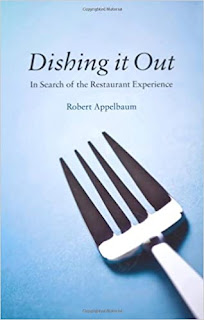 I decided to read the book Dishing it Out: In Search of the Restaurant Experience by Robert Appelbaum, published in 2011, because it had a chapter on Grimod De La Reynière, whom I've been trying to learn about. On the whole, Dishing it Out is dull, pretentious, and full of social science jargon, pedantic literary critics' jargon, superior-minded self-promotion,  and at the same time a strange sort of naivety. The chapter on Grimod wasn't great either. Nothing in the book is as clever as the title -- though several other books on amazon.com are also called Dishing it Out!
Briefly: not a good book. Appelbaum's focus is how a variety of authors, beginning with Grimod, have written about food. He judges the works of professional restaurant critics through the ages, and also writes about recent amateur internet-published restaurant criticism. He analyzes novels like Sartre's Nausea and Isak Dinesen's Babette's Feast; journalism like that of Michael Pollan; statements of foodies like Alice Waters, and others. He loves words like "civilization" and "culture." Sorry, his insights are not very interesting.

While Appelbaum denies that he's a restaurant critic, he does describe several experiences that he and his wife had trying to find good restaurants in London, Paris, and other French cities. Mostly, he complains because the combined food, service, and atmosphere never live up to his expectations. This is a bit tedious.

He does accomplish something: his method of picking out restaurants could be a lesson on how to eat badly in London and Paris and probably lots of other places. Here are a few of his documented approaches to ensuring that he will be disappointed:

This snarky review is © 2021 by mae sander for maefood dot blogspot dot com.
Posted by Mae Travels at 6:52 AM

I will give him kudos for his list of how NOT to find a good spot. I think we've fallen prey to more than one of them in the past! But it does sound like a bad book overall.

And I loved your writing. This might be one of my favorite lines in the whole thing! "....dull, pretentious, and full of social science jargon, pedantic literary critics' jargon, superior-minded self-promotion..."

I very much enjoyed that post. Lots of great information. When we were able to travel to other countries we would look to see where locals ate and order accordingly. Why would I want tourist food if I were in Paris!

This is a very good post. Living on the Oregon coast and especially in my town. The restaurants here are terrible and expensive. I wouldn't recommend any of them here.

Wow, that sounds like a terrible book! It feels like the way someone would eat their way through a city in the 1980s, and not today when you can research restaurants ahead of time (or even on the spot). Ugh, I'm glad I don't travel with him!

Guess I won't bookmark this one! Thanks for telling us about it though.

A very good snarky review. Why anyone orders the tourist menu is beyond me. It's like ordering fish in a steak restaurant and expecting it to be as good as the one from a seafood establishment.

"Funny". Once a customer/colleague told me he was so disappointed when he invited his hubby to a restaurant in Italy.
Yup. Go to the stall on the street where there is a looooong queue :-)
Sadly he asked me too late for that advice.

It's always a bad sign if the title is the best thing about a book. Very disappointing.

I'm glad you were able to share the information from the book about how to eat badly. That's definitely information worth sharing.

And perhaps you have inspired me to write a similar post: How to Read a Disappointing Book. I think I might have the necessary experiences to write such a post.

Glad you read it Mae so I don't have to. It sounds like the not to do list was the only worthwhile part so thanks for sharing it.

Thanks for reading this one so I won't have to... excellent review!

I prefer to avoid restaurants altogether to be honest, the servings are tiny, the prices are high and the drinks blow the budget every time!
Thanks for sharing your thoughts on this book

That list of how to have a bad restaurant experience: Brilliant! It would work in any city, I'd think, but especially ones where people are specifically looking for food experiences. It reminds me of "where should I eat while I'm in town" questions I see on Reddit lol