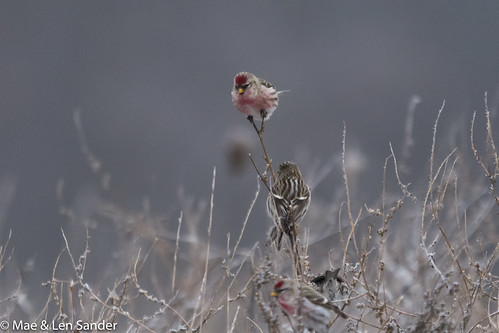 The common redpoll is a pretty bird, with a bit of red on the head and pink on the chest. There's been a flock of them in our area this season, and we've been trying to get a look at them. Finally on Sunday we found them -- we guess somewhere between 50 and 100 birds. We watched them land on a weedy field of bare stalks and feed for a while, and then suddenly all rise into the air and swoop around for a minute. Finally, on one of their flights, they swooped on out of sight. 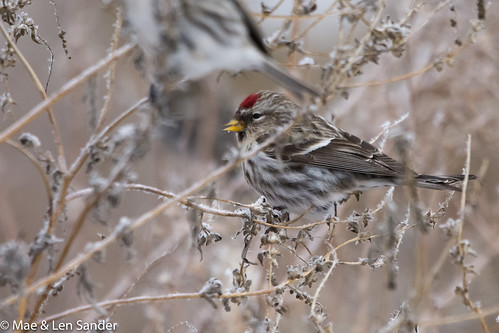 Our area of Michigan is at the edge of the redpolls' winter range. They show up in different places in different years, seemingly seeking good supplies of seeds. According to the Cornell birding website:

"Common Redpolls are energetic little birds that forage in flocks, gleaning, fluttering, or hanging upside down in the farthest tips of tree branches. Like many finches, they have an undulating, up-and-down pattern when they fly. To keep order in flocks, redpolls have several ways of indicating their intentions. When quarreling with flockmates, a redpoll fluffs its plumage, faces its adversary, and opens its bill, sometimes jutting its chin to display the black face patch. ... In winter, some redpolls roost in tunnels under the snow, where the snowpack provides insulation and stays much warmer than the night air."

We feel lucky to have such a nice birding opportunity, as there aren't many birds to watch in Ann Arbor in winter. 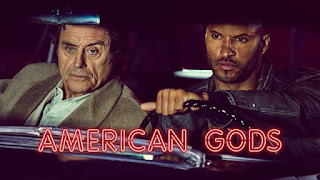 Like most of the people in the country, we are mainly staying in the house and watching TV while waiting for the vaccine to release us. We have been binge watching two previous seasons of "American Gods" on Starz (from 2017 and 2019), and when we finish the earlier episodes, we will probably watch the new season which is starting this week.

The Neil Gaiman book American Gods is one of my favorites, which I've read 3 times. The TV series missed a lot of the best parts, such as Gaiman's witty and humorous observations about middle-American life. Disappointingly, the TV treatment also skips the food scenes from the novel -- though it does deliver "a surreal drama that truly earns its TV-MA rating. There's frequent brutal violence, with onscreen deaths by decapitation, stabbings, slashings, bludgeonings, with spouting blood, lingering shots of gore, dead bodies, and disembodied limbs." (source of this warning: Common Sense Media) 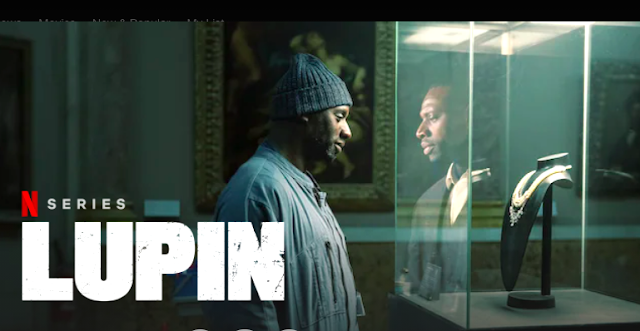 Much more enjoyable: the new Netflix series "Lupin," released last week. Produced by Gaumont Télévision in France, it's is a fabulous crime and revenge tale, set in Paris. I'm enjoying the plot and also the many beautiful scenes of Paris boulevards, interiors of restaurants and cafes, and famous monuments, along with images of less affluent parts of the city. The scenes in and around the Louvre in the first episode are especially wonderful (of course there's a shot of the Mona Lisa). A great Paris scene involves a getaway car crashing through the skylight (inverted pyramid) into the underground shopping mall attached to the Louvre.

The hero of the series, played by actor Omar Sy, is a lovable thief and a seeker of revenge. He gets his ideas for brilliant crimes from his favorite detective novels -- the tales of Arsène Lupin, which were written by Maurice Leblanc in the early years of the twentieth century. We've really liked the first 5 episodes. We can't wait for more to be released, but Netflix has not announced a date for this. Meanwhile, there are lots of other things to watch on Netflix, like "History of Swear Words," which is ok, not great.

Cooking and baking continue to be some of our best ways to pass the time. Len continues to try more and more complicated recipes for rye bread. And I've continued to look for new ways to use vegetables.
Review and original photos © 2021 mae and len sander.
Posted by Mae Travels at 7:56 AM

I've never heard of a redpoll. It's certainly a beautiful bird.

You get a lot of TV and movie channels. The Lupin film sounds good. I don't have Netflix or any other movie channel, so I will have to take your word on how good it is.

And of course, I always leave your blog hungry. Everything looks delicious.

This is a lovely post. The birds are so pretty and watching them, I know, is a joy. I have a difficult time watching TV with commercials. So I have never watched Redpoll but I will certainly check out the Netflix selection. Ohhhh now there is nothing better than potatoes and eggs. I also love the eggplant. Have a nice day.

That is a pretty little bird. I've never seen one here.

American Gods is a good book, isn't it! Lupin is on my to-be-watched list at Netflix.

I'm not a bird watcher, but love looking a photos people take of them! They're hard to photograph -- good job on the second pictures. We went several years without even turning on the TV, but are back watching a bit. One of our favorite finds is Upstart Crow -- a BBC sitcom about Shakespeare. Really funny.

Thanks for the recommendation for Lupin. We have been looking for a new series.

Cute little birds, we are feeding them and squirrels, etc here. I too have read American Gods, and watched the TV back when. Definitely not as good as the book and you're right about the food. I'd rather read the book again then watch the show this go around. I by-passed Lupin for some reason, but after reading your review I will watch it, have to see the Paris scenery, the Louvre and of course Mona Lisa. I think of that and how our guide there that day reeked of garlic and carried his lunch in his brief case, which is what we decided, they all do. Your eggs and eggplant looked pretty delicious! Thanks for the reviews, you always do a magnificent job of it!

The birds are really beautiful! I am going to watch Lupin too. Love crime series.

What a lovely bird, thanks for sharing the pictures :) I tried watching American gods but gave up quickly (thanks for the warnings !) but I'll be reading the novel because I love Neil Gaiman. The glazed eggplant are mouth-watering...

I've never seen a redpoll. It is a pretty bird, isn't it? And that is a big flock. I was looking at that Lupin show preview. I wanted to watch it but my husband didn't seem too interested. I will have to check it out either after he falls asleep or some late afternoon. It looks good.

We've just got Netflix, so thanks for the recommendation. The redpolls are so pretty, they must have been quite a sight. Stay safe, Tandy

What a gorgeous bird! I get excited when I see a few goldfinches in my garden here in the UK ☺️
American God's is on my list
Keep safe,
Alison xx

Cute birds!
Yes, our lives sure have changed! I can´t cook/bake atm cause I did sooo much before, I first have to eat to get room in the freezer!
Loads of DVDs here, too.
Oh, how long will this go on, please not really Easter.

Lupin sounds like one we’d enjoy together and it would get us to a different travel destination! We have been in the United Kingdom with various detectives now for months and months. (Thanks to Acorn... well worth the subscription if you like British Shows as much as we do). But we do also have Netflix. Yep, lots more TV than usual these days, but we still haven’t succumbed to watching daytimes, so I don’t feel too bad. .... I love eggplant, that looks delicious. My brother in law gave me the recipe for Eggplant in Norma Sauce and that has become one of our go-to meals. And Bill has been baking bread.

Such a beautiful looking bird.

It has been a great year for Common Redpolls, and there are several reliable locations around here to see substantial flocks. In years past they have visited my backyard feeders but so far this winter they have thumbed their bill at me!

Hello Mae,
I would love to have a flock of Redpolls in my yard, they are so cute. I have seen one Common Redpoll in Maryland years ago. Great photos. I will look for these shows, I have not seen them.. The food looks delicious, I love eggplant.
Thank you for linking up and sharing your post. Take care, have a happy weekend! PS, thank you for the comment and visit.

nothing else to do but watch tv, cook, and take walks. :)

We don’t have the redpoll here but I am feeding all birds who are visiting. I love watching them.
We couldn’t get into American Gods and stopped after a few episodes but I see it’s popular.

Yes to anything eggplant, it’s a favorite of mine.
A few days ago I tried to comment and I kept hitting some key on my tablet which undid all my typing :-( Today I’m using the phone, no clumsy fingers!

Hi Mae :) Your Redpolls are pretty...I think I have had some at my feeder, though I thought they were House Finches. Eileen mentioned that they could even be Pine Siskins...I'm very new at this, but it's fun to identify different birds! Your potatoes and eggs look yummy!

Lupin does sound intriguiung, and the potatoes and eggs look wonderful.

The eggplant must have such flavor! I would love that! We watch some of our old DVDs but usually they are pretty tame. Enjoy your weekend!

We watched the first season of American Gods and the first episode of the second series. I can't say that I get it yet!

I really need to try some Ottolenghi recipes!

Such a gorgeous little bird! I will check out Lupin for sure. I watched the first Season of American Gods but have gotten to the next two.