"Having and Being Had"

"The irony of our times, then, is that everyone depends on capitalism but almost no one has what we used to call a ‘regular job.’" -- Having and Being Had, p. 37.
"What I understand, after reading a book called Understanding Class, is that class is hard to understand. Nobody agrees on what it is, not even the people who study it. There are no classes— class is dead. Or there are hundreds of classes, and each occupation constitutes its own class." -- p. 66. 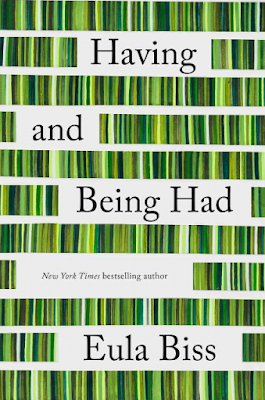 Having and Being Had by Eula Biss, published last September, is a series of little essays: insightful thoughts about money (or the absence of it), class (or the absence of it), jobs (or the absence of them), and what it means to feel comfortable in American life. Each essay is complete, but they build on each other. It's just coherent enough!
As I read I felt that I got to know the author very well, as I would if we had a series of conversations about these topics, but with more frankness than one usually gets in an ordinary conversation. In the end notes, an explanation of the author's method helped me understand this feeling that it was very frank:

"As I wrote this book, I established a set of rules for my writing. One of the first rules was that I had to name specific sums whenever I talked about money. Another rule was that I had to talk about money. These rules were a direct refusal of what I understood to be the rules of polite conversation around money: 1) Don’t talk about it. 2) If you do talk about it, don’t be specific. 3) Minimize what you have. 4) Emphasize that you’ve earned it. 5) Never forget that work is the story we tell ourselves about money." (p. 284).

The house Biss owns, where she lives with her husband and son, has a big role in her thoughts. It seems both a mystery and a miracle to her. She describes her feelings about having enough money to own this house, on Chicago's South Side, while in earlier times of her life she had barely had the money for a deteriorating apartment. She thinks about the Diggers in the 1960s in San Francisco, as described by Joan Didion. They "wrote and published for themselves, printing broadsides that critiqued the hippies. They were the counterculture to the counterculture. The Diggers would go on to provide free health care in the Haight-Ashbury and run a free bakery and stock free stores with things that had been discarded but were still good." (p. 115). Also, as she worries about the topics of class and ownership, she looks back at many historic moments, such as the original "Diggers" --

"In 1649, Gerrard Winstanley led the Diggers in an act of protest, the digging and planting of a patch of vacant land outside London. Their plan was to give the food they grew to anyone who worked with them, and to forge a new economy— not feudalism and not capitalism either." (p. 266).

Obviously, many economists have written about money -- Biss describes her readings from these men (I don't think she included any women) including Karl Marx. Here's a sentence that kind of sums up her views about them: "Three men won the Nobel Prize for economics in 2013...— two of them for theories that directly contradicted each other." (p. 53).

For the most part, the essays in Having and Being Had are personal. Biss feels that she has almost escaped from the class of people known as the "precariat." What class is that? --

"'Everybody, actually' is the economist Guy Standing’s answer to his own question, 'Who enters the precariat?' By everybody, he means potentially anybody. Illness or disability can force somebody into the precariat, as can divorce, war, or natural disaster. The precariat is composed of migrant workers and temp workers and contract workers and part-time workers." (p. 235).

Joan Didion, Emily Dickinson, Virginia Woolf, Czesław Miłosz, Gertrude Stein, and Alice B. Toklas, among others, all wrote at least a bit about money and its role in society, and I especially enjoyed the way Biss makes use of their thoughts. The views are apparent both in their writings and in their life stories.

On Virginia Woolf, she cites the book Mrs. Woolf and the Servants: An Intimate History of Domestic Life in Bloomsbury by Alison Light, and also Woolf's A Room of One's Own.  There are contradictions, she shows, between Woolf's ideals about her own life and the way she treated her faithful and vastly underpaid cook Nellie.

"Gertrude had some fun with a photographer who wanted to take pictures of her doing everyday tasks like packing a suitcase or talking on the telephone. She couldn’t do those things, she told the photographer, because Miss Toklas packed her suitcase and Miss Toklas handled her calls. Miss Toklas also typed her manuscripts. Finally, the photographer asked her what she could do, and she told him she could remove her own hat and drink a glass of water." (pp. 141-142).

As is now well-known, Gertrude Stein's family treated Alice Toklas very badly after Stein died. Although they had lived as a married couple, the law and Stein's relatives allowed Alice nothing of Stein's estate, and she was thus impoverished (but to the benefit of posterity because she had to write her cookbook to make money). I enjoyed reading what Biss wrote about Stein and Toklas, though I wish she had also discussed the essay "Money" where Stein asked "Is money money or isn't money money." (source)

About Emily Dickinson we learn:

"Dickinson never owned any property herself. She died in her father’s house, the house he willed to her brother. And her garden was worked by a man her father hired to dig for her. I had some things that I called mine, she wrote of the garden, And God, that he called his. The garden was hers until frost killed the plants in the fall, when her domain was reclaimed. The lesson being, James Guthrie writes, 'that ownership of all kinds is a precarious business at best, or at worst, a form of self-delusion.'" (p. 122).

I really liked this book. Strange personal note: I've always been fascinated by the Diggers in the San Francisco Bay area in the 1960s. When we left Berkeley, we were clearing out all our stuff -- and I gave all my unwanted clothing to the Diggers, including a creepy fur thing (the kind with little paws and glass eyes) that my great-aunt had insisted I take from her, but which I couldn't stand. A funny memory.

Are the Diggers still in existence? I've never heard of them before.

I've always found when I had money, I didn't have time to spend it in an enjoyable way. Now that I have time, the money is not there for me to enjoy.

I may understand class better than some, since I was raised in a very British home. Rather unlike how we Americans perceive class and classifications. Nicely reviewed, Mae.

Oh, help!!! This sounds like just yet another interesting read!!!!

I think I really would like this one. You get a very good sense of it from the sections you focused on. Thanks for this one.

It sounds like an interesting book. I can remember the days when there was a working class and a middle class and even the working class could afford to own a home, have health care, go on vacations during paid time off, and do all that on one full-time salary leaving one spouse available to care for children and elderly parents. What has happened with the transfer of wealth and resources ever upward is appalling.