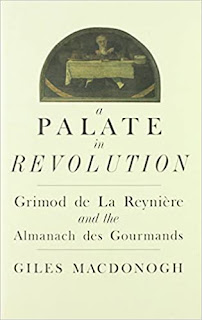 "Each volume of the Almanach des Gourmands contained, besides articles of interest to gourmands on the subject of different foods or furnishings for the table, some gourmand literature and a guide to the restaurants and food shops of the capital. In this last essential part of the work Alexandre-Laurent Grimod de La Reynière was the spiritual forefather of any modern reviewer from Egon Ronay to Messrs Gault and Millau." -- A Palate in Revolution: Grimod de La Reynière and the Almanach des Gourmands by Giles MacDonogh (p. 66).

Collaborating with a jury of food reviewers who were also his friends, Alexandre-Laurent Grimod de La Reynière judged the food of Paris and published reviews in his Almanach des Gourmands. The volumes of the Almanac  appeared from 1803 to 1812 in eight volumes. Grimod would solicit food sellers and restaurants to send samples so that the jury of his friends could taste and evaluate the dishes, which he would then write about. Each dish would be sampled separately -- in contrast to the way that aristocratic dinners at the time would load the table with dozens of dishes for each course. The creators of the foods were kept secret from the tasters, to help them with more objective assessment. Wouldn't this be a nice scheme for having catered dinner parties without money?
Like Grimod, food reviewers still rely on a variety of money-making schemes. The publisher of the twenty-first century Gault & Millau guide sells plaques for recommended restaurants to display in their windows. So do dozens of other rating services worldwide, including the prestigious Michelin Guides.
(Note: in case I was misunderstood, they do not pay for the recommendations in the guide, only for the plaques that they put on the window to advertise the recommendation.)
In the Napoleonic Empire era in Paris, restaurants as we know them were just being invented -- that is, restaurants where you could sit at your own table and order from a selection of dishes made to order by a chef. Grimod was the first food writer to offer restaurant recommendations, which he called a "legitimation." He was also the first critic to offer a testimonial to display:

"Any traiteur or restaurateur who had been granted a legitimation could, at a cost of 1.50 francs, obtain a signed and sealed document to that effect (extra copies came at 1.25 francs). The recipeient could then display the certificate in the window of his shop or restaurant." (p. 70) 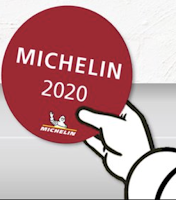 Grimod de La Reynière was the first writer to do a lot of things, but somehow someone always came along shortly after him and did it better! He's not completely forgotten by history, but everything about him seems to be a pale shadow of what someone else did!

Grimod belonged to an aristocratic and wildly rich family, who made huge amounts of money as tax farmers before the revolution. While his father's family had bought their way into the aristocracy, his mother was from a very ancient noble family (but of course rather poor by comparison). Because Grimod was born with a birth defect -- deformed hands -- his parents were very ashamed of him and sort of acted like he didn't exist, but he persisted. Grimod hated their pretensions and as a young man was very disrespectful of his elders. He gave parties at their palace that were irreverent and loony. To try to control their son, they used the famous method of a Lettre de Cachet to disinherit him and have him locked up or exiled. They also tried to declare him insane. It's a long complicated story that soon became entangled with the events of the French Revolution. Somehow, Grimod just sort of plodded onward until he was freed.

During the French Revolution, Grimod escaped the Terror and did not face the dramatic fate of many similarly placed aristocrats. This was partly because of his exile, and partly because he wasn't fully credentialed as an aristocrat, thanks to his parents' embarrassment. Mostly, his escape from the Terror seems to have been by chance and luck -- not heroic or clever or full of suspense. He just wasn't in anyone's way! It may have been the best of times and the worst of times, as Dickens wrote, but for Grimod it was one day after another. While he had been unobtrusively exiled in the provinces, his had father lost all his money to a con man, and died a natural death. Even with everything against him, Grimod managed to get back their palace on the Champs-Élysées and subsequently live there in genteel near-poverty, eventually making a living as a kind of (let’s face it) hack writer.

Grimod loved the theater, and especially loved actresses. When he needed to make money after the Revolution, he became a theater critic, but his works were censored because he also included remarks about politics. What could he do? He started writing about food, especially the food on the menus of the new dining establishments. These newly emerging restaurants were serving high-end meals to non-aristocrats who had become rich during the upheavals of the revolution. It was at this point that he invented the food review, and founded the club for testing out the best the new restaurateurs had to offer.

My source for most of this information about Grimod's life comes from the book A Palate in Revolution: Grimode De La Reynière and the Almanach des Gourmands by Giles MacDonogh (published 1987). Grimod lived from 1758 to  1837 -- thus through the end of the French Old Regime, through the Revolution and the Napoleonic Era, and well into the next phase of French government. There's a lot of fascinating material in the book, but unfortunately the author treats it in a way that I would describe as very pedantic and often dull. Maybe it's appropriate, as Grimod himself seems to have always come close to being really innovative and interesting, but there was always someone moreso.
Let's end with a few bons mots from Grimod:
Review © 2021 mae sander.
Posted by Mae Travels at 7:18 AM

Wow what a wonderful post. Thank you and have a great day.

I was fascinated by Grimod. I'd heard of him, but knew nothing compared to what you shared. Thank you for that and for sharing these images with us, too.

I just got around to reading my comments from the post before T day. You asked about the Green Stamps. CJ sent them to me when I won her giveaway a few months ago. They were in a book of about 2500. I had NO idea they were still redeemable, because I love using them in art.

I found it fascinating to read about Grimod. Thank you for that. The man lived through some interesting times. I always think my grandmother also lived through interesting times. She lived through the first as well as the second world war. She saw the first planes and the first cars. She was a dressmaker and saw fashions come and go. She died in the late 1980s, nearly 90 years of age.
Grimod's bon mots are wonderful. I feel I rather agree with that last one.
Happy T-Day,
Hugs,
Lisca

This is really fascinating. I was unaware restaurants paid for Michelin accreditation. I'm going to read up about that.

Great introduction to an interesting character!

Very interesting history, as much of history is. Actually a Chinese curse. "May you live in interesting times." We certainly do.

I felt rather sorry for Grimod by the end of his story (and for his biographer, who might have hoped to uncover some juicy angle but didn't!) I suppose the charismatic and well-connected often have an advantage, but maybe Grimod did as well as he could have, given his circumstances. Sounds like he was happy enough just to have a chance to air his opinions! He might have been a food blogger if he lived now...;)