Cornbread with Bell Peppers and Cheese 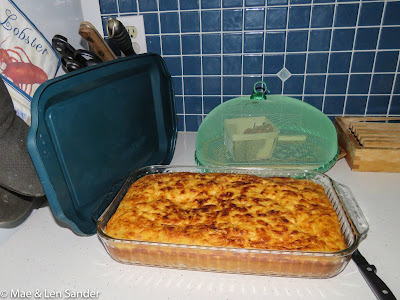 I've also been looking up the history of this type of cornbread. My recipe has pretty much sugar, so it probably is of Southern origin -- in the North, cornbread was savory and usually flavored with bacon fat. Going back further: in colonial times, Europeans preferred wheat to corn, which was considered inferior. Scarcity of wheat often required adding cornmeal to yeast breads which were then called cornbread, though were different from the modern baking-powder versions. Corn pone and similar unleavened dishes were eaten, but wheat was generally the preferred grain. In the 19th century, the development of chemical leavening and then commercial baking powder for quick breads enabled modern type cornbreads. By the 1870s, published cookbooks offered a variety of cornbread recipes. The Jiffy Mix (which I didn't use) was invented in 1930.

I have written about cornbread a number of times. This week's recipe is HERE. I made a double batch (9 x 13 inch pan rather than 8 inch pan) and used roasted red bell peppers instead of hot peppers.
Posted by Mae Travels at 9:00 AM

I've been craving cornbread lately--your cornbread makes me crave it even more! ;-)