"Where did the chimichanga, the glorious deep-fried burrito, come from anyway?" is the title of an article currently at the top of the L.A.Times column "The Daily Dish." I found both the question and the varying answers quite fascinating. I must admit that I find chimichangas delicious, enormous, and pretty undigestible, so in my experience they are more a memory of something I used to eat than an anticipation of something I might order in a Mexican restaurant any time soon. Maybe that's what inspired me to look around for more about this story.

What's a chimi? On the small chance that you don't know, the L.A.Times writer Margy Rochlin explains that a chimichanga is "a deep-fried burrito stuffed with steak, chicken or what-have-you. By most accounts, the chimi was invented in Tucson and is no less integral a part of the city’s fabric." Being invented in Tucson means that the chimi might be considered fusion food, though in fact the cuisine of southern Arizona in the early-to-mid twentieth century is pretty authentic Mexican.

Here's a screen shot of the google imagery for this dish: 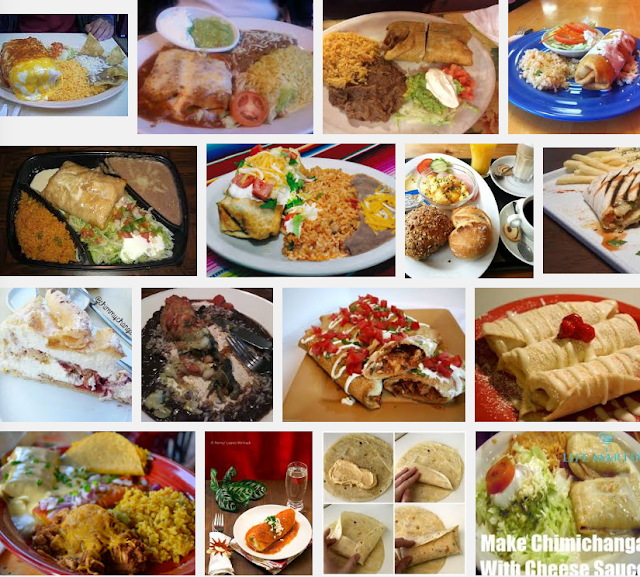 The Times article summarized the two main origin stories for chimichangas, both taking place in Arizona restaurants. One story takes place in the 1920s: a burrito accidentally falling in hot oil elicited a near-curse from the restaurant owner (a curse that turned out to be "chimichanga!" which sounds like some other expression, never explained, in Spanish). Of course the resulting deep-fried burrito was so delicious that the restaurant kept making and serving them. The other story involves a restaurant owner who wanted to use up semi-stale burritos so he deep-fried them. These folklore-like tales also appear in numerous other sources as well -- in the New York Times in 2011, in a Smithsonian-sponsored website "What it Means to be American," in a 2014 article by Gustavo Arellano, and on quite a few sites of restaurants that claim some connection with this history.

The writers who looked into the chimichanga origin story generally agreed that smaller deep-fried snacks appear in the cuisine of Mexican state Sonora, nearest state to Arizona. Arellano, whose book Taco USA: How Mexican Food Conquered America I quite enjoyed, suggests (maybe whimsically) that Chinese men who lived in Arizona and Sonora in the early 1900s often married Mexican women, and that the chimichanga is their effort to make egg rolls for their homesick husbands. He even tries to invent a linguistic explanation with a Chinese origin for the name "chimichanga," which I would say is utterly unconvincing!

Arellano warns his readers: "Let me also note that folk etymologies are notoriously inaccurate, that Mexican-food origin stories are frequently ludicrous, and that this mini-essay might be the most ludicrously inaccurate history of a Mexican foodstuff yet."
Posted by Mae Travels at 9:04 AM

When I lived in northern Arizona, back in the dark ages, we just called them deep-fried burritos. I still remember my favorite order at a little family-owned restaurant my friends and I used to go to: deep-fried bean burrito, enchilada style, with sour cream. Ahhhh youth!

Ok-I have never seen this column in the LA Times-where in the paper is it? I still remember the first time I saw a chimichanga-I had no idea what it was.

Whatever you call them, I love them. I'm a huge fan of Mexican food!

Esme -- The specific article about Chimichangas is linked in the blog post. For the column in general:
http://www.latimes.com/food/dailydish/

I've never eaten one ... Or if I have I can't recall. Have a great week. Cheers from Carole's Chatter

At some point doesn't some one try to deep fry everything? So why not a burrito. Because, let's face it, deep fried food it tasty.