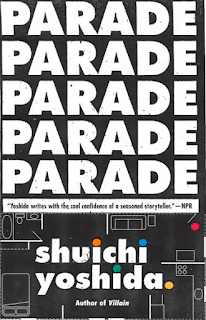 To start my reviews of recent reading -- Parade by Shuichi Yoshida is an amazing portrayal of a fictitious group of young people in Tokyo. This is an almost impossible book to review, because the last chapter is essential to understanding the book, but explaining why would be a colossal spoiler!

Parade explores the way that five roommates manage to live in a small Tokyo apartment. Each roommate narrates one of the five chapters. Here's one character's explanation of their arrangement:


"The magical genie of anonymity isn’t necessarily what you think … Most people think that anonymity allows us to reveal our true natures, but I doubt it. If I was to do something anonymously I don’t think I’d reveal my true self. Instead, I’d play the impostor, exaggerating one thing after another. Nowadays being yourself is seen as a virtue. The only image I get, though, of people who are being themselves is of someone who is negligent and sloppy.

"Maybe this was exactly what Koto was trying to say. The only way to live here is to play the role of the perfect self that fits into this place. And this isn’t a serious performance. If a serious role is what you’re after you’d best go to the Bungakuza theater or hang out with the famous theater troupe En.

"Maybe I’m not being clear. But here’s what I mean:

"The me who lives here is most definitely the Apartment Me I created, and by that I mean she’s someone who just doesn’t do serious. So the real me doesn’t actually exist here, in this apartment. The me who gets along well with the other residents (Ryosuke, Koto, Naoki, and Satoru) is Apartment Me … But maybe they’ve also created their own Apartment Selves, too." (pp. 97-98).

Another topic that comes up in the book is food. The characters' choices vary from very traditional food to McDonalds. One conversation takes place as two of the roommates are eating "lunch at the new soba place in front of the station." During the conversation, there are several descriptions of the food -- "bowls of nothing-to-write-home-about katsudon." (p. 57).

Some of the examples become significant as the story proceeds, but I won't expand on that. Here's a sample: "I was eating a Karasu bento, my second in two days, when the TV reception started to go crazy. I stood up, disposable chopsticks clamped in my mouth, and smacked the right side of the TV three times..." (p. 123). Or this: "Two or three days ago Naoki and I went to eat yakiniku grilled meat at a place near the station. .... As he stirred up the raw egg on top of his yukke..." (p. 102).  And this list of obscure items that I mostly don't recognize: "comfort food like hijiki, kinpira gobou, sesame tofu." (p. 95).

No more discussion of this fascinating novel, because I don't want to give away the impact at the end. I recommend it for its fascinating description of these young people, though I have no certainty that they are typical of Japanese youth or anything big like that. Maybe they are! Maybe not!

I discovered the author of Parade in my recent reading of short stories in The Book of Tokyo (blogged here). It was published in Japan in 2002, translation published 2014. 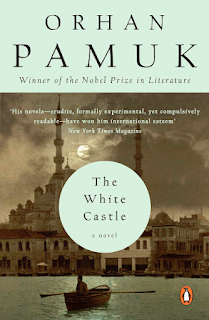 The second book I've recently read is by Nobel-Prize winner Orhan Pamuk. As I've enjoyed several other books by Pamuk, I decided to read this rather old historical novel, The White Castle, from the mid-1980s, translated 1990.  Like many historical novels, it's presented as an old manuscript discovered in a forgotten archive, a first-person narrative of old times.

Throughout the narrative, the fictional writer, a Venetian by birth, is perplexed by questions of identity and self-presentation. After naval battle, he became a captive in Istanbul, and was later given as a slave to a perplexing figure who arose from humble beginnings and who has ambitions to impress the Sultan. The narrator is enlisted to help his master with a number of ill-fated projects, including telling long and disquieting stories of fantastic beasts and problematic cruelty to the Sultan, who was only a child when they first met  him.

Identity and how one knows his own identity are the central themes of the book, which becomes more and more complex as the narrative proceeds. Here's an example:


"Once in a while I still see in my dreams that person who used to be me, or who I now believe was me, and wake up drenched in sweat. This person who brings to mind now the faded colours, the dream-like shades of those lands that never were, the animals that never existed, the incredible weapons we later invented year after year, was twenty-three years old then, had studied ‘science and art’ in Florence and Venice, believed he knew something of astronomy, mathematics, physics, painting. Of course he was conceited: having devoured most of what had been accomplished before his time, he turned up his nose at it all; he had no doubt he’d do better; he had no equal; he knew he was more intelligent and creative than anyone else. In short, he was an average youth." (Kindle Locations 129-134).

I enjoyed this early work by Pamuk, especially the portrayal of life in such a far-away and long-ago society. In a few places, food plays a role in the narrator's seeking after identity. At a certain point, he spent a lot of time at the Sultan's court, where he changed his appearance by gaining weight: "I quickly grew fat from stuffing myself with rich meats and pilaus and gobbling down sugar lions, ostriches, mermaids and nuts at these festivities, most of which lasted for days." (Kindle Locations 1608-1609). In searching for some elusive reality, he also tried the foods of poor people, as well as going among them to ask about their lives. 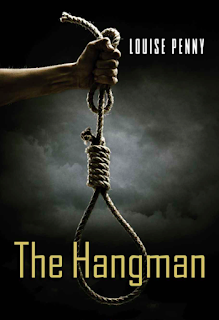 The third book in my recent reading is The Hangman by Louise Penny. It depicts a police investigation of a murder in a small town in Quebec, featuring her detective, Armand Gamache. Based on earlier books in Penny's Armand Gamache series, my expectations were for lots of local color, well-portrayed small-town characters and their relationships, and descriptions of food and other local customs. The Hangman is very short: only around 90 pages with very few examples of these appealing features. I was quite disappointed.

The investigation of the murder at the center of the story was described in a very hurried way. The little information and detail about the characters was sketchy and not very vivid. Above all, the big reveal at the end was very sudden, without the reader having been effectively clued in to the information that led Gamache to the conclusion. He simply announced who was guilty and why. Not a fun read!
Posted by Mae Travels at 1:41 PM

I may have to read the first book set in Tokyo. One of my friend's daughter's just got picked up by a professional sports team there so I think that is my next destination.