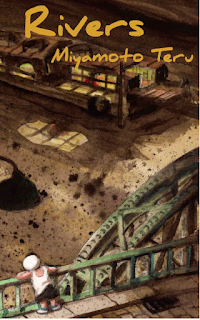 Miyamoto Teru's book Rivers is my latest reading in Japanese literature. Three short novels appear in one volume: "Muddy River," "River of Fireflies," and "River of Lights." While the translation is fairly new (published 2014), the stories date to 1977 and 1978, and the setting of the stories is in the 1950s and 1960s. The author is little-known outside Japan, where he is very well regarded and popular.

Each story tells about the life of a boy or young man in the poor neighborhoods of Osaka; though the identity of each central character is different, the stories work together to form a unified narrative about life in post-war Japan. A review in the Japan Times states: "The three episodes channel Japan’s rich history of Proletarian literature, with their nuanced, sympathetic depictions of working-class life — echoing Miyamoto’s own upbringing." (Mike Sunda, 2014)

Several strong themes unite the three novels. The echoes of World War II haunt the families in each story. They live in poverty and struggle to survive: each character faces the death or serious illness of one or both parents, and the parents thoughts echo with memories of wartime deaths and hardships. Each of the characters -- one a child, one an adolescent, and one a young man -- is growing aware, during his story, of what their future holds and struggles to gain control. His choice of colorful characters surrounding the protagonists is also very amusing, especially several drag queens in the final story.

Miyamoto strikes me as a writer of very vivid prose, especially his descriptions of sensory experiences: aromas, tastes, sexual feelings, visions like the clouds of fireflies in "River of Fireflies," and more. For example, a description of a woman about to play the samisen (a musical instrument): "The woman bowed her head, then lifted her face toward the ceiling and sat perfectly still for some time. This made Chiyo uncomfortable; to her it looked as if she was reading all the smells in the room." (Kindle Locations 1320-1321).

In "Muddy River" the central figure is a boy around 8 years old, and the time is the early 1950s; his parents run a small cook-shop where working men from the neighboring docks eat. In "River of Lights," set in the late 1960s, several of the characters -- both men and women -- are proprietors of small specialty food shops or nightclubs. Miyamoto's descriptions of the food, cooking, and business concerns in these shops are vivid as well as quite enlightening. The narrative contrasts strongly with the type of food writing that I usually encounter about Japanese cuisine. Sometimes foods that are now high-end very expensive delicacies were back then the food of common people. Sometimes the foods of common people might now seem completely unpalatable. Also, the focus on the commercial motives of food-shop owners is quite interesting.

Quotes that illustrate the interesting use of food in the novel: