Richard Olney's Simple French Food dates from 1974, with a second edition in 1992 and a more recent commemorative edition. It's a famous classic, known to be a favorite of Alice Waters and the source of quite a few of her ideas at her famous restaurant Chez Panisse in Berkeley, California.

I bought my first copy of this (or any other) Olney book this week. I can't really explain what took me so long, but let's face it, the number of classic cookbooks out there is very large, especially French cookbooks by American authors. Other than my own favorite, Julia Child, I usually tend to stick with cookbooks by actual French authors.

Some of the recipes in Simple French Food actually do appear simple, though in some cases, I think Olney complicates dishes that in actual French homes and restaurants really are simple. Consider cruditès, the simple plate of raw or blanched vegetables that makes quite a lovely hors-d'oeuvre. Olney suggests quite a few embellishments for these that I've never seen in France. But he did live there for almost 50 years, and I have only lived or stayed there from  a week to 12 months on various occasions.

Aside from simple things made more complicated, there's plenty of real complication in Olney's book. The chapter titled "Cold Terrines, Pâtes, Mousses," for example, has recipes that are just as elaborate as any I've seen elsewhere for these scrumptious but labor-intensive delicacies. Take the first recipe, "Rabbit Terrine," which makes 20 portions. It starts with the ingredient "1 rabbit, approximately 3 1/2 pounds, skinned and cleaned;" however, the entire previous page explains the other possible choices, such as domestic ducks, or any "small game, furred or feathered." The preparation requires a marinade (5 ingredients), stock (5 ingredients and 5 herbs/spices), and forcemeat (around 12 ingredients plus a number of spices and seasonings). Not what I would call simple!

Bravely, I tried one of the simplest chicken dishes, Braised Chicken Legs with Lemon, which is said to be borrowed from French Catalan cooking. This requires around an hour of intense prep and cooking, including carefully peeling 25 garlic cloves, and more time for simmering sauce and oven-baking the dish, as well as preparing a rice pilaf to accompany the dish. 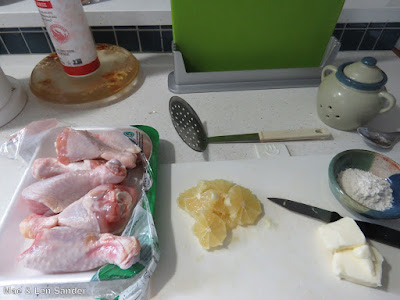 After par-boiling the garlic cloves, you simmer them in the stock for 40 minutes in a small saucepan. 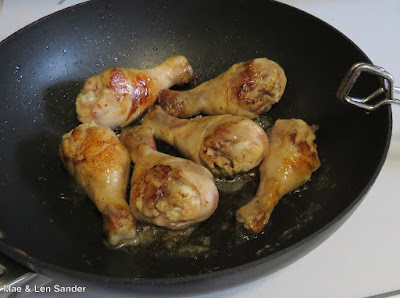 Meanwhile, you slowly brown the chicken legs in the butter, and arrange them in a baking dish with the poached garlic cloves (being very careful to keep them whole and perfect) and lemon slices. Then you remove the excess fat from the pan, blend the flour and fat, add the wine and then the stock, and return the entire sauce to the small saucepan to boil down for another 15 minutes or so. After adding the sauce to the baking dish, you bake it in a 400º oven for 40 to 45 minutes.

The recipe concludes: "The lemon will have almost completely disappeared into the sauce; the garlic cloves should be absolutely intact with a consistency of melting purée; the sauce must be tasted to be believed."

This dish should not be confused with the better-known chicken with 40 cloves of garlic, which is the recipe that follows in Simple French Food. Olney is sometimes credited with inventing this dish, which is mentioned in his New York Times obituary (1999). In fact, the 40-cloves recipe had appeared a couple of years earlier in a James Beard book, and I've also seen a much earlier version in cookbooks by the French author Edouard de Pomiane. Subsequently it's been published numerous times -- a web search turns up a version of chicken with 40 cloves of garlic by almost every chef and TV food personality you can think of -- from Nigella to Betty Crocker!

To conclude, here's a quote from Olney's obituary by Julia Child:


''I think he enjoyed being difficult,'' she said. ''But on the other hand, he could be absolutely charming if you treated him like the genius he considered himself to be.''

I love French cookbooks, I have an embarrassing number on my shelf. Love your chicken dish, Mae.

The dish looks great! I believe I bought that cookbook a hundred years ago. I wonder if it survived my purge of last year.

Well, it looks terrific -- and it looks like a lot of work! Loved the Julia quote -- Ah, I think most people are nice when they are treated like the geniuses they think they are!

I own only one French cookbook, and it is really more a book with recipes. I think you might enjoy it. I wrote about it on the blog a few years ago, and you may read it here, if you like.
http://lettersfromahillfarm.blogspot.com/2011/02/joie-de-vivre-by-robert-arbor-katherine.html

I hope you enjoyed that chicken immensely after all the work! I have very few French cookbooks, but a selection from the rest of the world, and the one I refer to most is my tattered edition of Joy of Cooking. For some reason whatever I'm looking for is usually in it standard US cooking anyway).

Hilarious that simple French food is complicated! Have a great week. Cheers from Carole's Chatter

So how did it taste though?

I must confess that French cooking seems pretty complicated to me so I don't tend to try it very often.

''I think he enjoyed being difficult,'' she said. ''But on the other hand, he could be absolutely charming if you treated him like the genius he considered himself to be.''

Isn't it charming that he thought he was focusing on simple French foods? And perhaps he was.