"The People of the Three Fires" 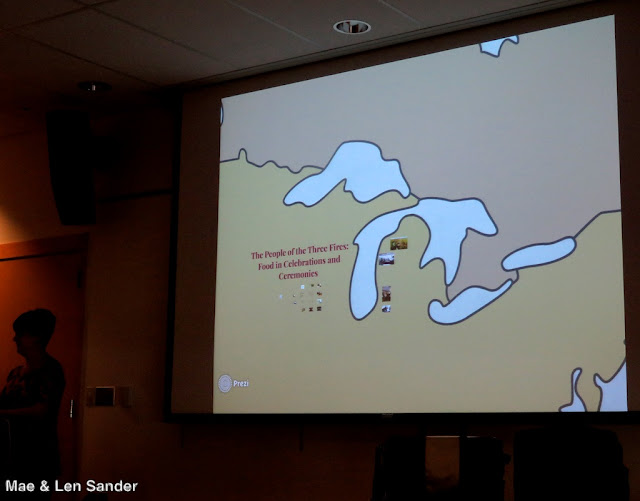 Today's Culinary Historians of Ann Arbor meeting featured a presentation titled "The People of the Three Fires: Food in Celebrations and Ceremonies of the Ojibwa (Chippewaw), Odawa (Ottawa) and Potawatomi Tribal Groups of Michigan." Around 60 people attended the presentation at one of the branches of the Ann Arbor District Library: this was an exceptional size audience for the CHAA, I'm happy to say. I learned a great deal from the speakers.

The speakers described several current food rituals that are practiced in the community that they serve. For example, in autumn, families hold "ghost suppers," where they serve food all day to all members of their community and anyone who stops at their homes. Sometimes several families hold these events at the same time or during a chosen weekend, a reminder of their ancestors and a way to serve traditional food. At other feasts, people prepare a "spirit plate" with a small taste of every food that is offered to the spirits of their ancestors.

In their role as social workers, the speakers try to encourage the use of traditional foods from before the Native Americans had contact with Europeans. In addition to encouraging the use of specific foods, they try to create awareness of the original roles that food played in Native American life. Besides providing nutrition, they pointed out, foods could be medicinal. As in many cultures, food could create identity.

For the Michigan tribes, many foods had a season within the 13-moon calendar -- June was the "Strawberry Moon," August, the "Wild Rice Moon," and early spring the time of maple sugar. Foods had a spirit: along with all creatures, plants were humans' relatives, and were a gift to humans; also, food could be a teacher of values. Through knowledge and awareness of these traditional views, the social workers try to encourage a diet of more native foods, which is both healthy and spiritually satisfying.

Of the many foods that pre-contact Michigan tribes ate, indigenous plants played a large role, but foods from outside the region also had been introduced by trade with other native groups. Wild rice, which was very highly valued, was gathered in certain areas of the Great Lakes such as northern Minnesota and a little in the Upper Peninsula, and traded to residents of other areas. The "three sisters" -- corn, beans, and squash -- were grown in fields together as in many North American Indian tribes. These pre-contact foods are identified as "traditional foods."

Before contact with Europeans, Michigan tribes were semi-nomadic, we learned. They lived by hunting, fishing, foraging, and agriculture. Each group had food camps in settled locations: for example, a sugar bush camp where they gathered maple sap and boiled it down to maple sugar.  An example of change introduced by Europeans is metal kettles that replaced the sealed birch-bark containers originally used in the sugaring process. In Michigan, the speakers pointed out, contact was very early because of the waterways that encouraged trade quite early in the history of Europeans in North America.

Europeans also introduced many new foods, which became an important part of the diet and the identity of Native Americans. Two well-known examples are fry-bread and Indian tacos, which are made from introduced commodities -- wheat flour and shortening, as well as European-introduced meats. These are well-loved foods, which the speakers identify as "cultural foods," in contrast to the "traditional foods." Chantal Henry says she learned to make fry bread from her grandmother, and isn't ready to give it up! However, the speakers agree that wheat flour and canned goods became staples because of the restrictions on life on the Reservations, and there's much evidence that the Reservation diet contributed to the epidemic of obesity and diabetes from which many Native Americans now suffer.

A particular project, the "Decolonizing Diet Project" led by Dr. Martin Reinhardt at Northern Michigan University, explored what could happen when a number of people ate only traditional foods for a period of time. The experiment resulted in improved health for the participants. The speakers also mentioned a "seed library" elsewhere in Michigan for saving the seeds of individual varieties of crops, such as special varieties of white corn, which have become rare and threatened with extinction. Eventually their center in Detroit hopes to create its own seed bank and help local people to grow traditional food plants.

In the presentation, I encountered many other fascinating ideas, and intriguing images. We viewed two Youtube videos and many photos of the activities of the tribes in Michigan. I found the entire presentation quite enjoyable.

Mae, this is an interesting article- who would have known about 'Indian tacos'!

This is fascinating. I never knew much of anything here. I especially love the idea of the ghost supper. That would be a fun one to incorporate into anyone's traditions.