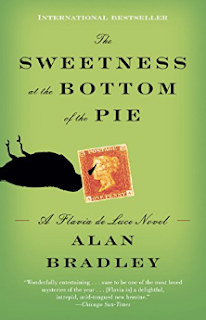 Flavia de Luce, age eleven, is the girl detective in The Sweetness at the Bottom of the Pie by Alan Bradley (published 2009). She's a very precocious child, and narrates her story in a pretty sassy voice. She knows she's smarter than most people -- especially her two older sisters, who are very self-absorbed, one in reading novels, the other in her own appearance. They live in the family mansion, inherited from generations of the aristocratic de Luce family, and all that it symbolizes. The story takes place in the early 1950s, with nice period touches throughout.

Though Flavia never intended to be a detective, she finds a body in her garden and then notices lots of details that the police investigation doesn't turn up. Flavia makes her own opportunities, relies on her considerable ingenuity, makes some excellent guesses, tempts several confidences to be confided in her, shows her intelligence at deducting -- and the result is a really good tale.

Lots of local color and strong characters are among the strengths of this novel. Here is one example, the family cook:


"MRS. MULLET, WHO WAS short and gray and round as a millstone and who, I’m quite sure, thought of herself as a character in a poem by A. A. Milne, was in the kitchen formulating one of her pus-like custard pies. As usual, she was struggling with the large Aga cooker that dominated the small, cramped kitchen." (p. 11)

Needless to say, the pie has its place in the story -- along with its sweetness, but I won't give away any details. So does Mrs. Mullet much, much later:


"MRS. MULLET WAS STILL IN THE KITCHEN with her hand up a chicken.

"She looked up at me and wiped her hands on her apron.

Flavia de Luce, with her intellectualism and her fascination with chemistry (which serves her often as she detects) is in fact much more appealing than plain old American teenager Nancy Drew with her lackluster boyfriend Ned; her two sidekicks, both girls; and her faithful housekeeper. Both girls' mothers had died years before, and both were left by rather distant fathers to make their own life -- a sort-of explanation of why they are so self-reliant and clever. I wonder why that still seems to be necessary after all these years and all the effort to have women and girls be self-reliant even if they DO have living mothers!


Imogen Quy (rhymes with Why), amateur detective in The Wyndham Case by Jill Paton Walsh, isn't exactly a girl -- she's thirty-one years old. She does in fact live in her parents' home (though they are both deceased), and has a job as the college nurse in one of the historic colleges of Cambridge University, presumably a fictitious one. Imogen's appeal to me has a lot in common with the appeal of Flavia de Luce and the memory of Nancy Drew, who doesn't appeal so much any more.

When a corpse turns up in one of the college libraries, and later another corpse appears in a fountain in the college grounds, Imogen tries to help the official investigation, but like Flavia de Luce, she's soon way ahead of them. For one thing, she's able to elicit trust from the Cambridge students, who all have things to hide and are completely negative in their view of the police.

In the home she inherited from her parents, Imogen has two student lodgers and one faculty tenant. Relationships with these individuals serve her well as she goes after clues and confessions. Imogen offers prospective witnesses tea and digestive biscuits, sometimes chocolate cake, sometimes a whole dinner. (Imogen always dines on a chop with vegetables, evidently because one single chop -- or one for her, one for a guest -- can't be shared because of a hungry stare from the lodgers).

While sharing these meals or snacks, Imogen coaxes her sources to tell her just a little bit, and then a little more. And like all successful detectives, amateur or pro, she has the ability to recognize that a coincidence is often of great importance, that seemingly unrelated events may not be at all disjoint.

The plot of The Wyndham Case is satisfyingly complicated, with just the right number of false conclusions, reversals, and revelations. Imogen Quy is a delightful detective-in-spite-of-herself, and the novel becomes a brain-teaser where she has to determine just what had happened, who was involved, why they acted, and how they succeeded in killing their victims. The resolution is highly satisfactory!

These sound really, really good and I've never heard of either one. I think especially the Wyndham sounds really good to me. I'll have to see if I can find that one around here.

I love mysteries. Sometimes it's an effort to read something that isn't! The more Brit the better, I always say. I'm re-reading some Nancy's (Did Secret of the Old Clock a couple of months ago) and my Trixie Beldens -- just to see how they hold up.