Life in an Apartment Building: "The Flea Palace"

"Though Cairo hums, Istanbul smells. Strangers are aware of its smell before they even approach the city. We can’t smell it, of course. They say a snake likes milk a lot and finds milk through its sense of smell, but could it detect the smell of milk if it swam in the milk cauldron? Probably the Cairene wouldn’t hear the hum and the Istanbulite couldn’t spot the smell of his or her own cities – and these are such old cities. When I was young, I didn’t know Istanbul was so old. Naturally, as it ages, the garbage increases. I no longer get angry." -- Elif Shafak, The Flea Palace (p. 133). 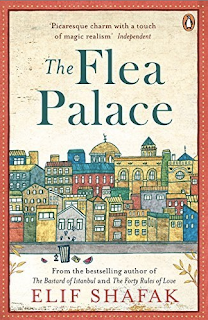 These are the words of Madame Auntie, a character who lives in one of the apartments in a formerly fine but the now crumbling building, called "The Bonbon Palace" for its former pretension, though it's now more appropriately "The Flea Palace." Though Madame Auntie feels that all Istanbul smells like garbage, the smell actually just pervades the apartment building whose residents are the focus of this novel. Garbage, in fact, is such a strong presence in the story that the word "garbage" itself appears 100 times in the novel, according to the count on my Kindle app!

For most of the inhabitants of the Bonbon Palace, a few other aromas compete with the smell of garbage, but garbage always wins:


"If exposed to this malodour on the street, one walks faster, if in the car, one rolls the windows up. However, if the house you live in, the morning you wake up into, the night you sleep through, the walls, the windows, the doors and every direction you turn to stinks, then you are trapped. There is no way of stepping outside the yoke of smell. ... Every night a brand new garbage mound awaits me comprising of stuffed plastic bags of all sizes marked with the emblems of the grocers and markets in the neighbourhood, bags with their tops tied but for some reason always with a hole or slit at the bottom, cardboard boxes tossed here and there, items that once belonged to godknowswhom, and black clouds of buzzing flies landing on and taking-off from the leaking watermelon juices and scattered scraps. Cats too… dozens of cats loom hither and thither… some skinny, some chubby, all indifferent to passers-by, bedridden in their foul-smelling kingdom, basking all day long over, inside and under the garbage bags, as their number increases incessantly, alarmingly." (pp. 273-274)

Because The Flea Palace takes place in a distinctly domestic setting, there's a lot in it about the food that the residents of the building cook and eat -- even a bit about a very hungry dog that likes pastry. At the same time, we learn of relationships. Fathers, mothers, grandparents, children, lovers, mistresses, in-laws, spouses, hairdressers and patrons of a beauty shop, weak people and strong people, and above all, neighbors are all constantly in action. And though the setting is mainly very modern Istanbul, the residents reflect a combination of modern and more exotic Turkish life, including some amazing summaries of their every-day superstitions, their Istanbul saints, and their consumption of alcohol despite its forbidden status for Moslems.

Food and cooking descriptions are quite revealing about the characters and their values. I loved especially the vast number of Turkish dishes that were named and sometimes described, like walnut chicken, halvah, the popular pastry called a simit, and the pudding called ashure that was a key theme in Shafak's other (and I would say better) novel that I've read, The Bastard of Istanbul (2006).


"Just like in the Tower of Babel, in the pudding cauldron too, miscellaneous types that would otherwise never come together managed to mingle without fusing into one another. Just as the workers at the Tower had failed to comprehend each other’s language, so too did each ingredient in the cauldron retain its distinctiveness within that common zest. The fig in the ashure, for instance, though subjected to so many processes and boiled for so long, still preserved its own flavour. As they boiled there on the stove, all the ingredients prattled on in unison but each in its own language." (pp. 199-200)

At times in the narrative, although excellent food is being cooked and consumed by the Bonbon Palace residents, there's a problem, like this:


"On that day, all their relatives gathered together, sacrificed a bulky ram early in the morning, then spent the entire day gulping down tea, almond paste, roasted meat, yogurt soup, wheat boiled with meat, yogurt drink, rice and meat sausage, apricot compote, meat pilaf, tea again, baklava with pistachios, semolina dessert for the spirits of the dead, grapes, watermelon, again baklava with pistachios and coffee; only to end up suffering from severe indigestion at night." (p. 292)

The Flea Palace shares its apartment-building theme with several other modern novels. This choice allows authors to explore the life within each private space and the interactions and conflicts among the residents, the things they keep, and the things they don't. Though this limited focus doesn't require or even permit a conventional plot, it allows for a lot of leisurely descriptive writing and artistic sketches, which Shafak does rather pleasingly.

Similar novels seem to have some of the same strengths and weaknesses. Other apartment-building novels that I know include Manil Suri's The Death of Vishnu, published in 2001, and Georges Perec's Life a User's Manual, published in 1978 (English translation, 1987). The Flea Palace was published in 2002, and The Yacoubian Building, about the residents of a building in Cairo by Alaa Al Aswany (which I've never read but maybe should) was published the same year. From the nineteenth century, Pot-Luck by Emile Zola is about the residents of a boarding house, a slightly different setting, since they live at even closer quarters than apartment dwellers. For a discussion of such books, I was interested in the following article: "Tall stories: the appeal of apartment block fiction" by Chris Power, which begins with a summary of The Yacoubian Building. I bet there are more such novels!

For more Turkish-centered reading and my 2006 visit to Istanbul, see the posts HERE.

Will add this to the TBR pile.. Thanks