Can you eat the chickens that roam the beaches, parks, parking lots, front and back yards, and everywhere else in Kauai? Yes, said our bird guide Jim Denny. You take a chicken and a perfectly round lava rock; put them in a pot and bring to a boil. Keep the pot boiling until the rock is tender.

Of course we saw many more interesting birds than these chickens -- including rare native species that may be competing for food or territory. But it's hard not to be intrigued by these feral chickens. We had heard that they were descended from a combination of introduced chickens: those of the early native humans who brought them in their outrigger canoes as long as 1000 years ago, and more recent introductions of domestic European barnyard chickens. Evidently the large numbers of birds were a result of escapees whose cages were destroyed during the devastating hurricane Iniki in 1992. 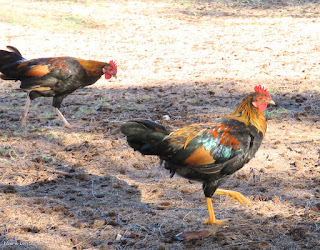 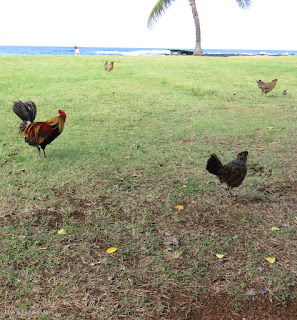 We were amused by all the chickens and their chicks. Also like the other tourists I couldn't resist taking photos, which I've selected for this post. Intrigued, I looked up the natural history of these half-wild half-domestic birds. In Modern Farmer magazine I read:


"The Hawaiian islands, incredibly remote from any continent, were largely absent of large animals prior to Polynesian settlement in (this is disputed) somewhere between 300 and 800 AD. There were no mammals, besides some bats, and the largest animals were some mid-sized birds. Most everything in Hawaii, geologically speaking, is new....

"Kauai is home to thousands of wild chickens, a particular variety that’s vibrant in plumage but of mixed value to the ecosystem of the island. They eat the venomous centipedes native to Kauai, a trait that people seem to like, but they have no natural predators besides pet cats and dogs, and the population is growing at an alarming rate." -- The Mystery Of Kauai’s Thousands Of Feral Chickens 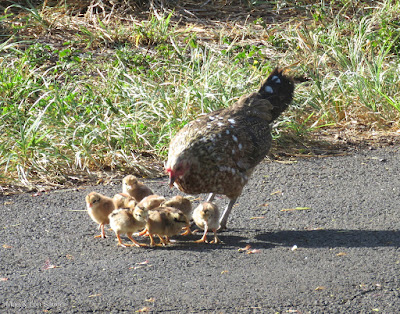 What's known about the ancestors of the present-day feral chickens? Researchers at Michigan State are studying their DNA to try to understand their origins and also to gain insights about chickens everywhere. Most of the articles I found described this research along with general natural history of the Kauai chickens. 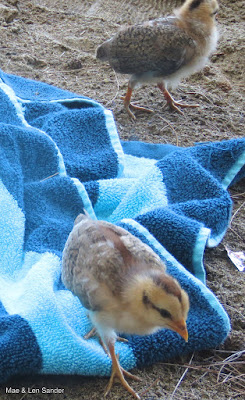 I found more natural history in the science journal Nature:

"... Kauai is teeming with feral chickens — free-ranging fowl related both to the domestic breeds that lay eggs or produce meat for supermarket shelves and to a more ancestral lineage imported to Hawaii hundreds of years ago.

"These modern hybrids inhabit almost every corner of the island, from rugged chasms to KFC car parks. They have clucked their way into local lore and culture and are both beloved and reviled by Kauai's human occupants. Biologists, however, see in the feral animals an improbable experiment in evolution: what happens when chickens go wild?

"The process of domestication has moulded animals and their genomes to thrive in human environments. Traits that ensure survival in the wild often give way to qualities that benefit humans, such as docility and fast growth. Feralization looks, on its surface, like domestication in reverse. But closer inspection suggests that the chickens of Kauai are evolving into something quite different from their wild predecessors, gaining some traits that reflect that past, but maintaining others that had been selected by humans. In this way, they are similar to other populations of animals, including dogs, pigs and sheep, that have broken free of captivity and flourished." -- When chickens go wild 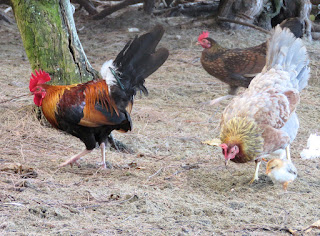 An article in the New York Times described more about research into the Kauai chickens:

"Fossils of chickens dating to the Polynesian era, long before Capt. James Cook, the British explorer, arrived in Hawaii in 1778, have been dug up in a cave on Kauai. From the fossils, scientists led by Alan Cooper, director of the Australian Center for Ancient DNA at the University of Adelaide, have extracted mitochondrial chicken DNA, part of the data they used to reconstruct the paths of Polynesian expansion. ...

"In the new research, the scientists sequenced DNA from 23 chickens from eight regions of Kauai. As the influx of farm chickens encountered the older Polynesian red junglefowl population, Dr. Gering [the researcher] wondered, 'How is that population evolving?'

"The mitochondrial DNA of a few of the chickens matched that of the Polynesian chicken bones from the Kauai cave; more had the DNA of recent European breeds. Not all of the feral chickens had the mutated thyroid hormone receptor of modern domesticated chickens. The birds’ appearances also indicate that ancient traits persist. Some look as if they have just walked off the farm, but many others, with burnt orange and black plumage for the males, look like red junglefowl from the forests of India or Vietnam." -- "In Hawaii, Chickens Gone Wild"

While I couldn't resist taking photos, I wasn't in the least tempted by the tee shirts, magnets, and many other touristy items with cartoon roosters or double-meaning slogans about Kauai's chickens. What has me fascinated is the research about their behavior and their history.
Posted by Mae Travels at 9:13 PM