Of all the overrated foods I know of, kale is the most overrated. I know it's a personal thing, as any taste is, but I'm overwhelmed by the ever-increasing presence of kale in so many places at every level -- a trend that's lasted quite a few years now. Some people like it, but can its health benefits really be as extreme as they are claimed to be? I hate the term "super food" for a lot of reasons, but kale is definitely one of them. 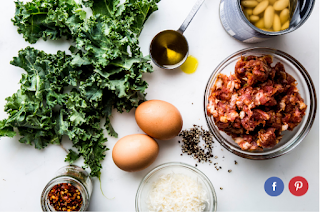 Just a random look at the featured recipes on the Bon Appetit website gets you to a suggestion for a nice white bean and sausage dinner. The recommended ingredients are illustrated in the photo at left.

"Cooking without recipes" is the name of the section with the white bean dish. The whole approach looks great until you get to the instructions: "Add a big handful of shredded kale until slightly wilted." Now why would you do that to a beautiful dish of white beans, parmesan cheese, sausage, poached egg and other delicious ingredients. I would totally enjoy that dish, except kale tastes to me like dishwater. Yeah, that kind of dishwater.

At least they say this in Bon Appetit before they link to fourteen more kale recipes:


The myth: Kale is the most nutrient-rich of all the leafy greens.

The truth: Actually, spinach, romaine, parsley, and chard are “healthier” for you. That’s not to say kale is bad—it’s still packed with Vitamin A, C, E, K, and fiber.

I know people who are grateful for such an abundance of recipes because kale is also the nemesis of those who subscribe to farm shares. I recall one friend with a farm share who made kale pie. Her children even ate it. She was a bit rueful about it though since the main ingredients were eggs, cream, and pie crust.

Kale isn't just for rich spoiled foodies, though. Food banks love to give away kale to their customers. I was just reading about a food bank in Washington, DC, where they have convinced supermarkets to stop donating junk food including cakes and other sweets. They want more kale! 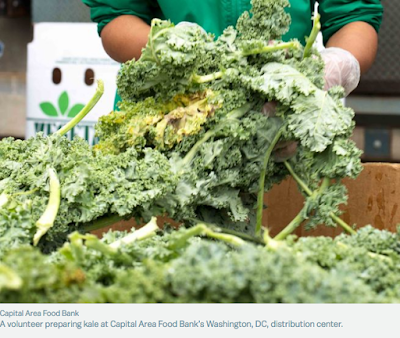 I read an article by Julia Belluz titled: "This food bank doesn’t want your junk food. Good." The article described several reasons why food insecure people may binge eat (fearing scarcity) and why offering them unhealthy or super-fat junk food just makes their lives more difficult. The link between food insecurity and obesity becomes more obvious when you think about the ups and downs of too little or too much food that may be their experience. Belluz explains:

"Like other low-income Americans, many of these folks struggle with obesity, diabetes, heart disease, and high-blood pressure... sending them highly processed, sugary foods — which are energy-dense and nutrition-poor — isn’t going to help matters." 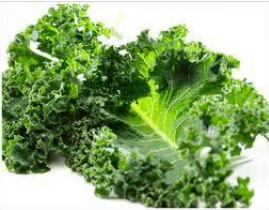 Food Gatherers in Ann Arbor has a less severe policy about cake, but makes a huge effort to find fresh fruit and vegetables for their clients. I completely support and applaud this effort to help their food-insecure clients choose healthier foods. Even kale. I just don't quite understand its sacred place in all this, though.

Left: illustration of kale from the kale recipes page of the Ann Arbor Food Gatherers' website. Of course there are also recipes for over a dozen other veggies! I hope the people who receive the food from Food Gatherers get a choice.

The only way I can handle kale gracefully is when it is julienned or finely chopped and doused in some sort of dressing or vinaigrette that is flavored strong enough to take away the taste! Nice to know that if we ever dine together no one will have the kale!

I don't know. I like kale. We eat it often. But we also eat Swiss chard, broccoli rabe, collards, mustard greens, and spinach. We like cooked greens in whatever form.

I'm not a big kale fan but then I tend not to like any of the really dark greens like collard. I have used them in smoothies and you can't really taste it though the texture turns to this kind of odd gooey substance. That's interesting that things like spinach, romaine and parsley (all of which I like) have even high levels of nutrients. Now I don't have to feel so guilty for skipping my kale!

I like it in limited doses, like Brussels sprouts or carrots. Best, very thinly shredded, add in some smashed garlic and salt and stir fry quickly in a wok on very high heat in which several tablespoons of olive oil have been heated, toss for about 1 minute. Then it's good.

We love kale and use it in smoothies, salads and cooked with garlic.

I hate it and always have! If you get Netflix streaming, there is a show called Obsessed - the comedian Jim Gaffigan doing a standup routine in Boston, and he has a very, very funny bit about kale. (if you've not heard of him, he isn't gross like many comedians. he's a family man, Catholic, and talks about every day life. really wonderful)

I like kale in soups but haven't tried it any other way.

You made me laugh! No kale in this house, we are a make-free zone! We tried it, hate it, and I am fine with other foods that have the same health properties such as spinach and chard. Good post ☺️

I'll eat kale in a caesar salad, but the only other way I like it is baked, with lots of olive oil, sausage & white beans. I think it's overrated, especially when spinach is so versatile, less bitter, and better raw!