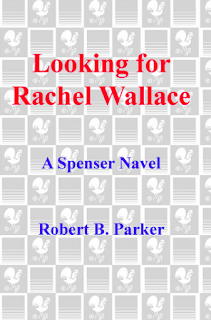 As I read Robert Parker's 1980 detective novel Looking for Rachel Wallace, I was slightly unnerved by how little in it was obsolete. The novel begins when Parker's cool, suave detective Spenser is hired to be a body guard for Rachel Wallace, a feminist/lesbian author who has received threats from shady anti-gay right wing organizations.

Though he's very macho, as in working out all the time, drinking a lot of beer, and always carrying a gun, Spenser is also quite open-minded: a combination that contributes to the appeal of these novels. His reaction to Rachel Wallace is to wisecrack, and she constantly reminds him that she has no sense of humor. However, he demonstrates that he takes her seriously and acts without prejudice.

The hatred of gays, communists, and social activists that motivates Rachel Wallace's attackers is all too familiar. Her attackers, as you'd expect in a good plot, turn out to have more motives than just their politics, but the people that follow them and the thugs they hire bear a creepy similarity to the alt-right and other extremists that have emerged as a force in the current US presidential election -- and how creepy is that?

In the Spenser novels, Parker always included a lot of notable characters of various types. Spenser's extraordinarily beautiful girlfriend Susan Silverman, for example, is a practicing psychotherapist with a PhD from Harvard. In later novels, Parker makes her kind of quirky and two-dimensional, but in this one she's a really enjoyable and self-assured character worthy of the respect of the author, the reader, and the other characters in the book.

Spenser expresses his semi-secret intellectual side by reading books. He impresses and maybe annoys Rachel Wallace not only by having read her book but also by saying it was a kind of repeat of Simone de Beauvoir, which he's obviously also read. Spenser demonstrates his sensitive side by enjoying fine dining and cooking, sometimes just for himself:


"I had cornbread and country sausage and broiled tomato for breakfast and read the Globe. Then I put on my gun and went looking for Mulready and Cody." (Kindle Locations 1976-1977)

And sometimes for very appealing and sophisticated Susan:


"I had another Molson and brought my two pots to a boil again. In the big one I put a pound of spaghetti. In the small one with the steamer rack I put the frozen broccoli. I set the timer for nine minutes. ...

We ... set the table while the spaghetti boiled and the broccoli steamed. The bell on the timer rang. I went to the kitchen and drained the broccoli and tried the spaghetti. It needed another minute. While it boiled I ran the Cuisinart another whirl and reblended my oil and spices. Then I tried the pasta. It was done. I drained it, put it back in the pot and tossed it with the spiced oil and broccoli. I put out the pot, the leftover loaves of Syrian bread that I bought for lunch, and a cold bottle of Soave Bolla. Then I held Susan’s chair. She sat down. I put another log on the fire, poured a dash of wine in her glass. She sipped it thoughtfully, then nodded at me. I filled her glass and then mine." (Kindle Locations 2214-2223)

As I read the book I wondered if the only obsolete detail was a reference to Master Charge. (If you aren't old enough to remember, Master Charge was the previous name for MasterCard, and changed around the time this book was published.)

The Spenser books are very popular in our bookshop, I haven't yet read one but this may be a good place to start.

I've always liked these books -- and the series. But I haven't visited in a long while -- how interesting that they remain au courant.