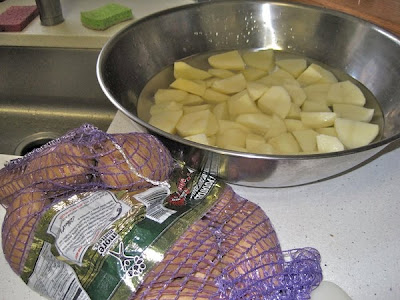 What 5 pounds of potatoes looks like before & after peeling
Last night I made latkes for 14 people; total, two 5-lb. bags of potatoes plus a couple of yams. Like my fellow Missourian Tom Sawyer, I got my friends to help paint the fence -- so the guests brought classic brisket, Michigan salad (with dried cherries & blue cheese), applesauce, berry pie, lemon cake, candy, and wine. Result: a wonderful meal that no one person could possibly do alone, at least not me.

For years, I've been making latkes without a recipe, but the results were drifting, and I wasn't satisfied. So this year I decided to do some research to improve them. There are three steps: making batter, frying the pancakes, and keeping them until time to eat. Unless you have only a very small number of people, it's impossible to produce hot fresh latkes for everyone at one time. I practiced with a small batch last week. Yesterday I made one batch in the morning and one batch in the late afternoon. Here is what I learned.

Recipe: I started with a simple recipe from Claudia Roden's Book of Jewish Food.
Frying: I realized that I have not in the past used a hot enough frying surface or a vast enough quantity of oil. By the end of the many many batches I made this year, I got this straight. Oil was flowing off the griddle and down into the little receptacle attached to the griddle, and the pancakes really sizzled when they hit the surface. I flattened each one and cooked them a long time to make them crisp.

Waiting: Joan Nathan's advice in various newspaper columns is to drain the hot latkes on a paper towel from the time you cook them until dinner (or freeze them if more than a day in advance, which I didn't do). Reheat them on a cookie sheet at 350º for 20 minutes. She says that refrigerating them makes them gummy. This advice worked for me!
Posted by Mae Travels at 10:23 AM