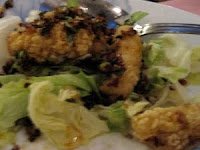 I've been thinking about Chinese food, so last night went to a Chinese restaurant downtown, Kai Garden. We haven't been there in several years -- I have no idea if it's still the same owners. We particularly enjoyed a dish of fried squid with various spices, and a bowl of noodle soup with shrimp wantons.

In thinking about Chinese food and culture, I'm collecting misconceptions about China. Which is why I wanted Chinese food, in a way.

Summary of what I know so far -- with references. Despite popular misconceptions:
Update: The New Yorker has published a list of 2009's top China myths -- none of them are the same as mine.

My favorite New Yorker myth: "China is a land of no siblings. Fact: In July, the Shanghai government began encouraging eligible parents to have a second child in effort to counter the effects of an aging population. This is a major sign of a more relaxed attitude about the one-child policy in place since the seventies."
Posted by Mae Travels at 1:35 PM