My imaginary kitchen in Medieval England 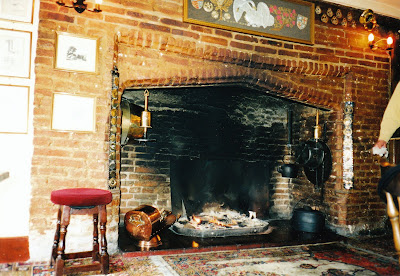 While we were in Cambridge some years ago, we had delicious meals in various inns, such as the Swan, which is in a village not far from Cambridge (High Street, Clare, Sudbury, Suffolk). These institutions preserve historic signboards as pictured below: The Swan claims to have the oldest signboard in England. Most of them serve a modern version of old English food: often roasts, Yorkshire pudding, and retro desserts like sticky toffee pudding. They very often have a big, open hearth fireplace that a person could stand in, and a selection of antique cooking tools, benches, and chairs around the fire.

These inns present one with an opportunity for fantasy about life in a medieval home. I've looked up a few things about what it must have been like. The fireplace and chimney were innovations, for one thing -- in early medieval homes, a fire was made in the middle of the main room, vented through a hole in the roof. The resulting air quality probably compared to that beside a modern freeway.

Early English cooking equipment supported boiling, spit-roasting, and toasting over the open fire. An iron pot or cauldron hung by chains on a stand over the fire for stews or soups. Cooks used long-handled spoons to stir the pot or to whack the kitchen boy. Skimmers and fork-like flesh hooks served to tend the pot and pull out pieces of meat. Additional kitchen and dining utensils included wooden bowls and spatulas, ceramic and copper vessels, and iron or copper trivets, plates, lidded drinking vessels, and flat spoons. When a metal or ceramic item began to wear out, a tinker could mend its holes with solder or an iron plug.

Fire was always a danger with a floor strewn with rushes in a house made from wood and thatch. Servants or cooks who tended the fire took careful measures to avoid dangerous bursts of sparks. At night, a family member or servant inverted a heavy ceramic fire cover with handles and small vents over the hearth, to prevent the embers from either going out or causing a fire. This fire cover was called a curfew, and the law dictated that it was to be in place when the evening bell — also called the curfew — sounded at around 8 PM. To start a new fire, a medieval Englishman or woman struck a flint on a fire steel, or brought some embers from another fireplace in a ceramic firepan. Utensils like these appear in museums, as well as in inns like the Swan.
Posted by Mae Travels at 10:26 PM