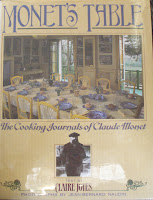 Monet’s house at Giverny embodies the French dream of what a country house should look like. His kitchen and dining room must have been the scene of many country lunches on quiet Sunday afternoons. There were certainly meals on the terrace — you can see them in paintings at the Musee d’Orsay.

I have lost track of the photos that we took on our visit to Giverny; however the cookbook Monet's Table by Claire Jones has some beautiful photos of the house, so I've appropriated them to show you this wonderful kitchen. The book also contains Monet's own recipes that he made in that kitchen and others.

In my experience with Sunday lunch at country houses outside Paris, at a distance similar to Giverny, French people find the kitchen to be the real heart of the house. An open fireplace (such as that in Michelle's house in Cotignac), is often the central appeal, though as in Giverny, not always. Before lunch, a group of women -- often several generations -- often gather in the kitchen to prepare the meal. In beautiful weather, the table is usually set outside, but often with formal china, tableware, and serving dishes from indoors. 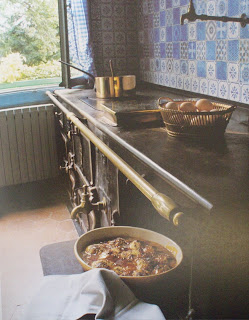 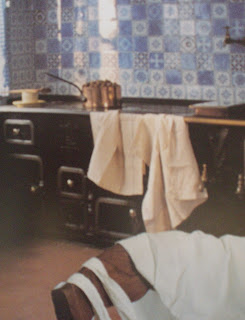 I suspect that the French families who line up at Giverny on Sunday afternoon, presumably after such a lunch, are fantasizing about how their family would use this beautiful and tasteful house, as well as looking over the garden where Monet painted the famous water lilies. 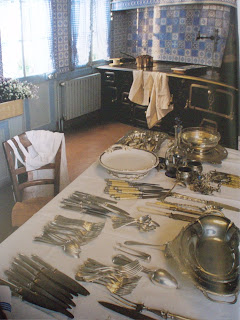 How lovely! I still haven't been to Giverny and am dying to go.

Having just returned from France, I was excited to find your blog and this post! Lovely, and I couldn't agree more!

Would you mind if I used one of your photos in my blog post about Monet's house? They wouldn't let us shoot in the kitchen and I'm having problems with my scanner on the postcard! Of course I would credit your blog and the book. Thanks!

As I said in the post, they aren't my photos -- they come from the book I referenced. So you need double attribution. I'll watch for them on your blog!
Mae