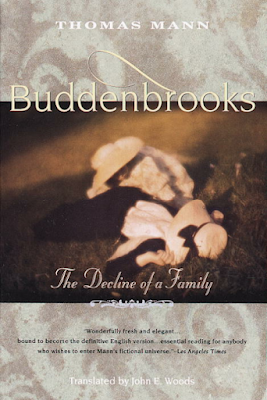 Buddenbrooks: The Decline of a Family was published in 1901 by the now-famous author Thomas Mann; soon after publication it became a sensation. Mann's 1929 Nobel Prize for literature cited it as a major accomplishment. Obviously, whatever I have to say about it has probably already been said! Therefore, I've decided to offer some quotations about the time that the Buddenbrooks family was still prosperous and confident.

"With a pounding heart Johann counted the days, tearing them off one by one from the Advent calender Ida had made for him, until the day of days would arrive—the page with a Christmas tree on it. There were more and more signs of its coming. On the first day of Advent, a colorful, life-size picture of St. Nicholas was hung on the wall in Grandmama’s dining room." (p. 514).

Soon after, an old man dressed as Saint Nicholas comes to the door. Johann must say the Lord's Prayer to  convince Saint Nicholas that he is a good boy. As a reward, he is allowed to reach into the sack that's for good children, and he receives gifts. As December advances, the weather becomes colder, and mysteries appear throughout the house and in the town:

"The doors to the grand salon were kept closed, guarding mysteries; marzipan and gingerbread appeared on the table. And it was Christmas out on the streets, too. Snow fell, it turned cold, and the sharp, clear air was full of the cheerful and melancholy melodies of black-mustached organ-grinders, Italians who had come to town dressed in velvet jackets for the holidays. Dazzling Christmas displays appeared in the shop windows. And the gay, colorful booths of the Christmas fair had been set up around the tall Gothic fountain on the market square. Wherever you went, you could smell the sweet fragrance of fir trees being sold for the holiday." (p. 515).

Gift giving and family meals continue through December 23 and Christmas Eve. Poor families come to the door for gifts, the employees of the family firm are given treats and presents, and before the family Buddenbrooks' dinner, choirboys from the local church sing carols for them. As they prepare to dine, a family member reads the Christmas story aloud. Four generations gather around a candle-lit tree in the very much decorated dining room and sing "O Tannenbaum." Then they open their lavish gifts, and finally their servants (about whom they don't think very much) serve sweets followed by a magnificent meal.

"Mamselle Severin and the housemaid now moved about the room with refreshments, and Hanno found time to look about him as he sat dunking a cookie in his tea. Chatting and laughing, people stood beside the table or walked up and down alongside it, showing off their own gifts or admiring those of others. There were objects of every sort—made of porcelain, nickel, silver and gold, of wood, silk, and linen. On the table was a long row of gingerbread cakes, glazed and sprinkled with almonds, alternating with loaves of marzipan bread, so fresh they were still moist inside. The presents that Frau Permaneder had wrapped or decorated—a needlework bag, a doily to put under a potted plant, a hassock—were trimmed with large satin bows." (p. 523)

"Since they had all eaten lunch earlier than usual today, they consumed large amounts of cookies and tea. But no sooner had they finished than a large crystal bowl filled with a yellow, grainy puree was passed around: almond crème, a mixture of eggs, ground almonds, and rosewater. It tasted quite wonderful, but one spoonful too much and you ended up with the most awful stomach ache. Nevertheless, even though Madame Buddenbrook begged them 'to leave a little corner for dinner,' they helped themselves freely. And Klothilde performed miracles. In grateful silence, she spooned up almond crème as if it were porridge. And now came little glasses of sabayon to refresh their palates—served with English plum cake...."

"As always on Christmas Eve, the table had been set in the columned hall. Madame Buddenbrook said the traditional grace with great fervor: 'Come, Lord Jesus, be our guest and bless what Thou hast given us.' As always on Christmas Eve, she concluded with a little admonition, the primary thrust of which was that on this holy night they should remember all those who were not as fortunate as the Buddenbrook family. And once this was taken care of, they sat down with a good conscience to a lengthy meal, which began with carp in drawn butter and a vintage Rhenish wine.

"The senator slipped a few of the fish scales into his wallet so that it would not lack for money throughout the coming year.... The turkey, stuffed with chestnuts, raisins, and apples, was praised by all. Comparisons were made with birds of years past, and it was concluded that this was the largest in a long time. There were roast potatoes, plus two kinds of vegetables and two kinds of stewed fruit, the bowls heaped so full that each looked like a hearty filling main course, rather than a side dish. They drank vintage red wine ...."

"Little Johann sat between his parents and managed to force down a piece of white meat and some dressing. He certainly could not eat as much as Aunt Thilda, and he felt tired and a little queasy. But all the same, he was proud that he was allowed to dine with the adults, proud that one of those tasty buns strewn with poppyseed had been placed on his napkin, too, and that there were three wine glasses set at his place, whereas normally he drank from the little gold beaker that Uncle Kröger had given him at his christening. But then, when Uncle Justus began pouring some oily, yellow Greek wine in the smallest glasses and the iced meringues appeared—red, white, and brown—his appetite returned. He ate a red one, although it hurt his teeth something awful, and then half of a white, and had to sample at least a little of the brown one, filled with chocolate ice cream. He nibbled on a little waffle, too, and sipped at the sweet wine while he listened to Uncle Christian, who was talking now. ..."

"Before the last course of butter and cheese was served, old Madame Buddenbrook used the opportunity for another little speech. Even though not everything had turned out over the years quite the way one, out of shortsightedness, might have wished, she said, nevertheless there still remained such manifold and obvious blessings that their hearts should be filled with gratitude." (p. 525-530) 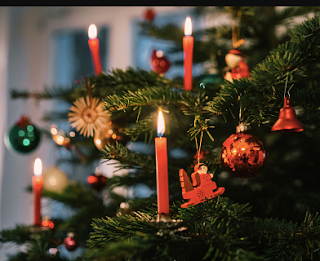 Thomas Mann's ponderous novel is charming, but full of tragedy and human folly. His depiction of the merchant class of the Germany of the mid-19th century (that is, before he was born in 1875) was not always sympathetic, and he clearly questions their values and their lack of appreciation for education, the arts, music, and literature. But Mann's gift for visualizing the faces, expressions, inner and outer lives, and even clothing, houses, streets, and home furnishings in that time is irresistible.
Blog post © 2021 mae sander.

This was very interesting to read. I learned something right now. Thank you for sharing.
www.rsrue.blogspot.com

Thanks for highlighting this Thomas Mann Christmas novel .... I guess I didn't know much about it before but a look into Germany's traditions & views then would be interesting.

The sound of the almond crème makes me feel queasy. But what a feast!

Buddenbrooks is a film that is re-showed every Christmas here! My cupboard is also well stocked with Lebkuchen and other Christmas specialities! Have a great day, Valerie

@Valerie-Jael -- I didn't know about the many German films of the novel Buddenbrooks, including one from the 1920s and one from 1959, as well as a TV series. I think the novel must be much better-known in Germany than it is here.

That was interesting. Although I had heard of Thomas Mann, I had never read his books. Thank you for sharing that.
I had a German colleague and 'night buddy' when I was still working as a nurse at the hospice. She would always bake a lot of cookies and would also bring in Lebkuchen into work. We would normally invite the girls who's families lived far away to celebrate Christmas at our house. There was also an Austrian colleague, so we were never short of cookies. I have sweet memories of those days.
Happy T-Day,
Hugs,
Lisca

I knew about Thomas Mann, but didn't know about this story. It sounds like the feasts were over the top for the upper classes during that age. I was saddened to read how Mrs. Buddenbrooks "prayed" for the poor, almost as an afterthought. I can see the class struggle that Mann was talking about. This is a great review and I enjoyed reading about the various foods and sweets that were served in the Buddenbrooks' home during Advent. Thanks for sharing this with us.

I've never read Thomas Mann but I love his descriptions of the holiday and the food! You really can "see" the characters.

I've read that book but only once and don't remember the Christmas part. I'll keep this in mind to read next year. Thanks!

And guess what´s on our kitchen table...

I didn't realize how many of our American Christmas traditions came from Germany. Marzipan and gingerbread and almond crème are all foods I've heard of, but I've never attempted to make or even tasted any of them.

I shall add Buddenbrooks to my personal Read-Before-I-Go list.

Each paragraph is a word picture almost like an Advent Calendar themselves -- little snippets of Christmas -- As you point out the author made it easy to visualize each family member and the room and the decorations ..... Probably needless to tell you that I have not read the book and I much appreciate your sharing these quotes. Of course the one paragraph about the long blessing and thoughts for those "less fortunate just before beginning the overly-sumptious feast rather spoiled the good feelings (just as it was meant to do.) ... This was fun and made me wish I were better-read. (So many books, so little time ...)