Sujata Massey has written mystery novels set in many places. Her amateur detective Rei Shimura is an American who lives in Tokyo where she has an antique business. Massey has been writing these novels for a long time, and the one I read this week (the fifth in the series) was published in 2001, which makes it read almost like a historical novel. 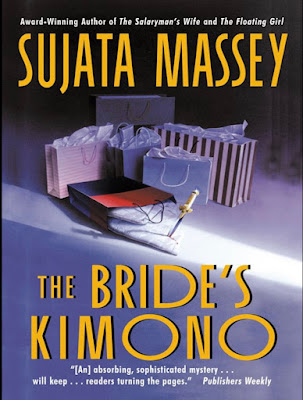 In The Bride’s Kimono, Rei flies to the US in order to deliver some very valuable antique kimonos from a Tokyo museum to one in Washington, D.C. She also has agreed to give a lecture about the history of the kimonos: the description of the research she does is very interesting, though of course I have no way to know if it’s accurate. It does make reading enjoyable.

Rei has naively made a reservation at a hotel near a large shopping mall outside of the city, because she found  a cheap group tour for Japanese women who wanted to shop (and wanted nothing else). As a result, the novel is full of references to fashion labels and fashionable styles, which is kind of retro. Another retro thing: the descriptions of airports, where the passengers can be accompanied to the gate by the people seeing them off: no security for boarding planes!

I was very amused at the descriptions of various places in the areas of Washington and Virginia that I'm rather familiar with, including the huge shopping mall which I suspect is based on Tyson's Corner. Not surprisingly, the author somewhat rearranges the geography of the area to suit the needs of her plot.

Of course there's a big mystery plot -- one of the women in the group disappears, and Rei has to investigate what happened to her. Also, one of the very valuable kimonos disappears from Rei's hotel room, and its disappearance is linked to the disappearing young woman, as well as to Rei’s complicated relationships with the people who run the museums in Washington and Tokyo. Lots of action and danger ensue.

Rei’s relationships with two men in her life play a big role in the book, including their various choices of where to eat. There’s Takeo, a Japanese man whose very rich father allows him to lead a fairly isolated and idle life style — as he doesn’t like to go out, Rei and Takeo usually stay at his Japanese-style house, where a big night includes a corn-and-octopus pizza. For various reasons, he shows up in Washington but instead of this rather simple Japanese-Italian dish he wants upscale French food.

Then there’s her earlier boyfriend Hugh Glendinning, the Scottish lawyer that she had lived with in Tokyo earlier in the series of books. Hugh turns out to now live in Washington and have a connection to the museum where she’s working. Hugh takes her to one of his favorite restaurants:

"Hugh waved me into a plain glass door labeled EL RINCON ESPAÑOL. The owner beamed at him when he walked in, and the waiter called him by his first name. Within a minute we were ensconced at a cozy table with a carafe of a zesty Rioja between us. A short while later the waiter brought a savory pancake of egg and potato, a bowl of mushrooms marinated in garlic and wine, and slivers of a salty hard white cheese with some crusty rolls. 'This is so good,' I said, relaxing for the first time all day. 'I was looking forward to coming to America to eat all the ethnic food I can’t find in Japan.'" (p. 136).

In my favorite food description of the novel, Rei eats in an Italian restaurant with a couple of Japanese acquaintances who order a variety of dishes: "sautéed lamb chops with mushrooms over a mint risotto ... a Milanese-style breaded veal chop served with a tomato salad... homemade mozzarella cloaking my eggplant-filled mezzelune pasta... a giant chocolate truffle." (p. 259).

There's plenty of suspense along with the details of food, travel, art history, and both good and evil characters in this book. The Rei Shimura series includes quite a few more novels, with the most recent published in 2014. Will I read more of them? I just don't know! Author Sujata Massey has also written three novels set in India around 100 years ago, about a woman lawyer and detective -- I've read all three of these, and hope Massey will write more of them.

Sorry this is a generic message, but it's all I could pull together. Late Thursday as I headed to the basement, I caught my sleeve on the railing and lost my balance. I fell down 13 of the 14 steps to the basement floor. I laid there for what seemed like hours, but in reality was probably little more than 20-30 minutes. When I was able to get up, I realized I had hurt my back enough that all I could do was lie on it. I have trouble sitting or standing. I hope you understand.

If I normally visit you every day, I hope/plan to feel better by Monday. Thanks for your support and understanding. PLEASE, NO SYMPATHY. It was my own stupidity.

I find it weird when I read books set in the past, like this, where what was normal is now not allowed. It's like watching crowds of people not wearing masks. Not sure about pizza with corn and octopus. Lovely review Mae.

I have not read Massey yet ... but I'm curious about her books set in India. I spent too many years navigating Tyson's Corner. Ha! Thx for the review.

This is probably a series I should add to my ever lengthening list. It sounds like a good one -- wonderful setting, interesting characters. Thanks for the intro!