I started reading the novel Night Train to Lisbon, but I found it way too dense and full of excessive and very long descriptions and philosophizing. When I discovered that the book had been made into a movie by director Bille August, starring Jeremy Irons, I decided that instead of continuing to read, I'd just watch the movie. Good call! The movie was actually pretty fast paced and full of dramatic moments.

Raimund Gregorius (played by Jeremy Irons) is a high-school teacher in Bern, Switzerland. One rainy day on his way to teach, in the first scene of the movie, he sees a young woman standing on the edge of a bridge railing. He drops his briefcase and students' papers fly onto the wet pavement; he grabs her to prevent her from jumping. It's a suspenseful scene, in contrast to the same beginning in the novel, which includes many details that don't really contribute to an exciting start to the story.

As the movie continues, the young woman comes to class with him, but runs away within a few moments. He takes her red leather coat and tries to follow -- abandoning his students who are starting a tedious translation from Latin. The novel goes on and on about how he's a classics professor and what his life has been like -- the movie literally cuts to the chase as he follows her. Then he loses her and looks in her coat pocket where he finds a book by a mysterious Portuguese writer and a train ticket. He uses the ticket and the next scene is in the exotic streets of the city -- the novel has way too much detail about his train trip before we get there. 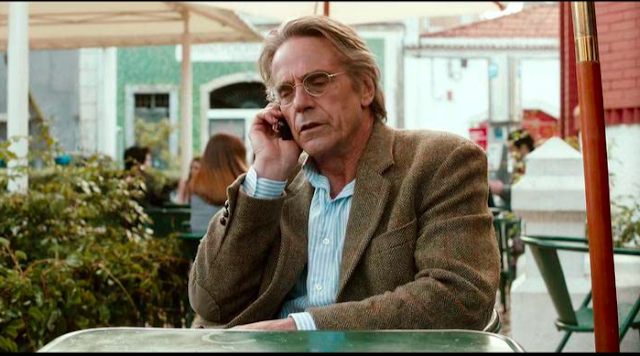 Here's Raimund Gregorius in a cafe in sunny Lisbon, taking a call from the school to which he's steadfastly not returning. This is more or less where I stopped reading and just watched the movie instead. Instead of citing long passages from the book he had found, the movie enacts Gregorius's search for the the writer of the book, who he says thinks the same thoughts that he's been having for all the years while he was doing nothing with his life but teach. The book's writer, it turns out, was a member of the resistance against the Portuguese dictator Salazar. As Gregorius interviews one friend of the author's after another, we see flashbacks to the very active and violent lives of the resisters, which occurred during the mid-1970s. These flashbacks are definitely the most enjoyable part of the movie, though Gregorius's relationship to the aging members of the author's past are also interesting. 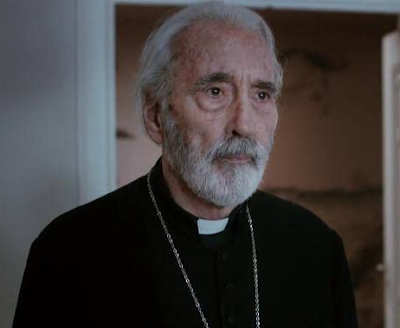 The book's author, Amadeu, had been best friends since boyhood with one of his later companions in the resistance. The head teacher of the school they attended was Father Bartolomeu, played by Christopher Lee. He offers Gregorius an interesting memory of the school under the hideously repressive situation in the past. The drama of these scenes is intensified because the school where Gregorius meets Father Bartolomeu is in ruins, with papers on the floor and crumbling old corridors, while of course the flashbacks show a very living institution. 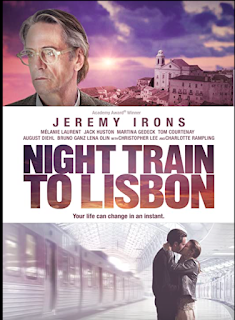 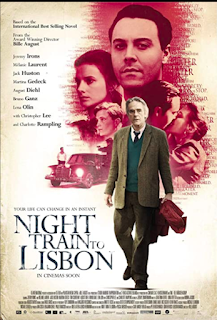 The critics were mixed about the novel, but they were really negative about the movie. So don't listen to me -- it's probably a horrible movie and I just don't see it that way. To quote the first sentence of the review in the New York Times:

"Early in 'Night Train to Lisbon,' Raimund Gregorius ..., a stuffy academic, remarks that his wife left him because she found him boring. Oh how right she was!"

Or the start of the review titled "Night Train to Nowhere: Bille August’s Latest Is a Snoozer" in The Independent:

It never ceases to amaze me how many people manage to waste money producing movies so bland, empty and pretentious that nobody will ever see them. Don’t they read the scripts before they sign the checks? We’ve had several this year. Now here’s another. Night Train to Lisbon sounds enticing—like one of those dark flicks about Cold War spies in East Berlin with Richard Burton or William Holden. Check your enthusiasm at the door."

What's wrong with me that I didn't hate this movie?

Hmmm...generally I love the book much, much more than the movie. But that isn't always true. And do I always agree with the critics? No way. There's a time, especially around this holiday season, that I relish the somewhat banal yet inspiring.

Oh my. Everyone has different tastes. Back in the day I knew if my sister-in-law liked a movie, I would not!
Re: your question on my blogpost.
Our granddaughters alternated a week here and a week at their own home during 2020 and 2021. Their parents worked from home, and the girls (gr. 5 and 8 at the time), did virtual school. We were bubbled with them, and we all did pick up grocery orders. We had them a total of 35 weeks!

yes it's a very good adaptation of the book. But the book is full of subtilties, and it's great litterature in my point of view

I'm adding this to my watchlist. Thanks!

It's a good thing we all have different tastes. Dave usually ignores critics and Oscar lists when he chooses a movie for us to watch.

Sounds very interesting. I´d like to (hahaha....) visit this place one day. (oh, these media have to do for quite a while still, I suppose).

I love to read what the critics think of a film I love dearly. Sometimes the critic's review doesn't seem to review the same film. It's like THEY were asleep, not me. Critics bring their own set of baggage to the film. They may dislike the author, the star, or the plot line, so they give it a negative score. I've gotten to the point, where I prefer to read what my peers think of something. I admire your review of the film and the part of the book you read, Mae.

Based on your review I think I would like to see this movie. I take the critic's reviews with a grain of salt as we all have different taste. Sounds intriging.