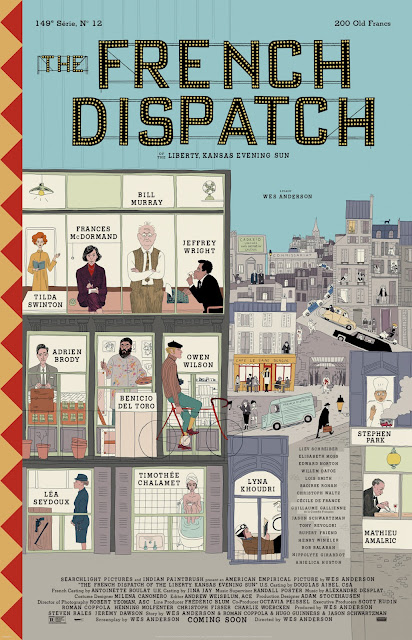 On Christmas we watched Wes Anderson’s new movie “The French Dispatch.” As a long-time reader of the New Yorker magazine, I appreciated the way it was a send-up of what I’ve always referred to as “endless New Yorker articles.”
James Bond is the epitome of one type of cool — the very cool super masculine man (perhaps he’s so super masculine they have to retire him).   “The French Dispatch” is the epitome of another type of cool — the cool of Paris, being in Paris, the eternal Paris. The legend of the 1920s expatriates in Paris drives much of the material in “The French Dispatch.” However, Wes Anderson extends, distorts, satirizes, spoofs, over acts, and otherwise works on this cool image.
Wes Anderson is very special, and I haven’t any hope of really explaining or describing the essence of this fun film. All I can say is that it’s visually amazing because of all the stylized scenes, especially of Paris streets.
Posted by Mae Travels at 7:08 AM

Our movie choices are limited to Netflix and old films on TV. These look good.

There are so many films available! It's difficult to choose. Thanks for the reviews!

TheHub and I usually go to a couple of movies the week between Christmas and New Years, but have not for the past couple of years. This week we are not going either. Thankfully we are in the middle of Succession so it is our entertainment, and as long as I make a little popcorn we can feel like we are in a theater. (A really comfortable theater with couches and afghans)
Thanks for the movie recommendations. We should finish season 2 of Succession this week and a good movie would be a great diversion before we begin season 3.

I haven't seen the new Bond movie, but I'll watch it at home when I do. I like Wes Anderson but haven't seen this one yet, either. Porco Rosso is a favorite around here. My son has it on Blu Ray.

I'm grateful for all the home viewing options we have. Back in the day with only 4 TV channels it would've been harder to weather this pandemic.

The James Bond film was the only film we went to see at the cinema in 2021. We went to a morning showing and there were around 30 people in the cinema. British TV have shown all of the Bond films from Sean Connery to Timothy Dalton on Sunday afternoons. I shall be looking out for the French Dispatch. To answer your flower question on my blog - the rose is n blooming late but everything else is early for Spring - they are in a walled garden so may be more sheltered! Hugs, Chrisx

I didn't even know there was a new Bond movie, but Craig is OK as Bond.

I always love visuals in film. But I don't have a lot of the options many have. I SURE won't be headed to the movie theater anytime soon. I predict there will be a surge in drive-in theaters this summer, especially if they can afford to show first run films.

I love Frankie Drake. I'm also rewatching it as I have time. I can't wait for season 5! I really love the four women who make that series so very special.

If you are sharing this for T Tuesday, thanks for shaken, but not stirred, dear.

that's neat you were able to watch the new Bond movie at home we don't do streaming etc there are so many choices out there-it is easier for us just to have good cable service-which doesn't show much new stuff.
they have been pushing in ads to go to the cinema, Sandra Bullock has a new film coming out that looks really good but it advertises can only be seen at the theater-so I have the feeling they are pushing people to go to the theater.

We used to always do a movie on New Years Eve, and even though we never went to movies all the time, I do miss going. I like Wes Anderson's films (especially the Grand Budapest Hotel), and I definitely would like to see the new Bond film. I like how you had that martini to go with the film too. It's perfect for a holiday movie. Have a great T day Mae, and the rest of 2021 too. hugs-Erika

Happy T-day, Mae. Love the Bond movies - sad to hear this may be the last featuring him. I love a good martini and always think of Bond an Nixon when I drink one.

All your movie choices sound interesting.

Hope your New Years is wonderful and full of good movies!

I think this might be a problem of our translations here. Bon on no version was interesting for me, how sad!!!
I think the "Steinbeisser" really got me out.
Really sad cause I love Eureka / Quantum Leap and series like that.

That is a movie i would love to see. On my list
Happy T day and Happy New year this weekend. xxxx

I have to start Frankie Drake! And what service is French Dispatch on? I'll be adding either Amazon or Hulu (or maybe both, as I'm planning to cut the cable. That's one of the few movies this season I've really wanted to see.

I am glad you are watching all of these movies. I have never been a fan of James Bond, not sure why. It's nice to just sit back in your own home and enjoy the movies. Have a great day today.

I'm looking forward to that Bond movie and I am #21 in line at the library. We quit movie theaters ages ago before the pndemic because of the rude behavior of audience members. Poor Doug always gets the talkers next to him or someone directing music at Harry Potter.

We love The Big Lebowski and often use the quotes. Haven't heard of Frankie Drake but will see if I can find it.

My huhby isn't a fan of movies. Mostly he watches documentaries and sports. But with our daughter, son-in-law and grandkids we watched The Martian with Matt Damon. That was good.
My husband did watch movies when we were younger and his favorite bond was Sean Connery.
Thanks for sharing. Happy New Year.

Interesting to read about movies. I have seen a few of the older Bond films. (Sean Connery). Now we watch very few films. I just read that the film about Lucy Ball and Dezi Arnaz is on Amazon Prime, so this week I'd like to watch that.
I was intrigued by the French Dispatch. I have never read The New Yorker, but I am an avid collector of the front pages. And I love Adrian Tomine. As soon as I saw the poster of the film it reminded me of him. I then watched the trailer. Wow! I love it! Quirky! I like it.
Happy (belated) T-Day,
Lisca

Daniel Craig does make a good Bond, one of my favourites. I almost watched the Big Lebowski the other day while I was looking for a DVD to watch! Warm Winter Wishes and Happy T Day Elle/EOTC xx

Me and hubby are also great Bond fans. We braved to see it when we were down in Cornwall and of course made sure 'someone' sorted out the DVD and watched it again a few days back. Brilliant! (Lyn)

The French Dispatch is on my list to watch. We watch the "classics" here at Xmas with the fam: Christmas Story, at least one version of The Christmas Carol, Christmas Vacation, Love Actually, and It's a Wonderful Life.