"It must have hurt the Indians dreadfully to have the things they had always believed trampled on and torn from their hugging. Down deep we all hug something. The great forest hugs its silence. The sea and the air hug the spilled cries of sea-birds. The forest hugs only silence; its birds and even its beasts are mute. When night came down upon Ucluelet the Indian people folded themselves into their houses and slept." -- Emily Carr, Klee Wyck, p. 10. 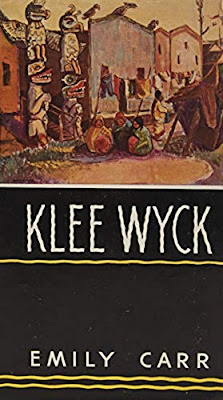 Klee Wyck by Emily Carr is a memoir in the form of short sketches describing events, adventures, and people from her experiences as a painter in British Columbia, Canada. She published it in 1941, when she was seventy years old and in poor health, fearing that she would no longer be able to continue with her art. Yesterday, I reviewed Susan Vreeland's novel The Forest Lover, a fiction based on Carr's life (blog post here). I was so interested that I decided to read Carr's own autobiographical writings.

Many of the sketches describe Emily Carr's lifelong interactions with the native people of western Canada. She gained their trust at a time when European colonizers of Victoria, Vancouver, and the villages of the province were abusing Indians and when there were few good relationships among whites and non-whites. She was especially compassionate with the mothers who lost so many children to disease and poor conditions.

Emily Carr's travel to the villages often involved frightening trips in small boats along the waterways connecting the islands of British Columbia. She suffered from hunger, cold, soaking rainstorms, crowded small quarters on the boats, seasickness, and fear that the sailors would forget to return to pick her up from some of the abandoned villages, but she always persisted, making sketches of the native art and the wild landscapes to take back in order to create full-scale oil and watercolor paintings. She worked for years to create a unique style and to preserve the spirit of native art works, and received recognition only when she was more than 50 years old.

The totem poles in native villages were especially fascinating to Emily Carr. At the time she visited the villages, many of these magnificent works of art were decaying or being destroyed. A few were sold to Canadian collectors (and still are on display in museums) but most were falling into disrepair as the native villages were forcibly de-populated, or were devastated by Western illnesses.

Carr writes of the totem poles in one remote village:

"They looked like mere sticks in the vast sea of green that had swallowed the old village. Once they, too, had been forest trees, till the Indian mutilated and turned them into bare poles. Then he enriched the shorn things with carvings. He wanted some way of showing people things that were in his mind, things about the creatures and about himself and their relation to each other. He cut forms to fit the thoughts that the birds and animals and fish suggested to him, and to these he added something of himself. When they were all linked together they made very strong talk for the people. He grafted this new language on to the great cedar trunks and called them Totem poles and stuck them up in the villages with great ceremony. Then the cedar and the creatures and the man all talked together through the totem poles to the people. The carver did even more— he let his imaginings rise above the objects that he saw and pictured supernatural beings too. The creatures that had flesh and blood like themselves the Indians understood. They accepted them as their ancestors but the supernatural things they feared and tried to propitiate."(pp. 86-87).

I found so many wonderful and fascinating descriptions of the native villages and their inhabitants as Carr visited them. Some of her sketches interestingly describe the foodways. For example:

"One day after work I found the Douse family all sitting round on the floor. In the centre of the group was Lizzie. She was beating something in a pail, beating it with her hands; her arms were blobbed with pink froth to the elbows. Everyone stuck his hand into Lizzie’s pail and hooked out some of the froth in the crook of his fingers, then took long delicious licks. They invited me to lick too. It was 'soperlallie,' or soap berry. It grows in the woods; when you beat the berry it froths up and has a queer bitter taste. The Indians love it." (p. 180).

Food preferences -- along with many other issues -- were a mark of distinction between the native people and the Missionaries who often lived in the native villages and tried to change their ways, by force or by persuasion. In one case, Carr's travel to a native village included a daughter of Missionaries:

“We’ve took the Missionary’s daughter hunting devilfish,” chuckled Louisa, as she passed me. We ate some of the devilfish for supper, fried in pieces like sausage. It was sweet like chicken, but very tough. Miss Missionary ate bread and jam.

“Father would not like me to eat devil,” she said. She told me the hunt was a disgusting performance. (p. 26).

Klee Wyck is full of fascinating insights about the beliefs and religious traditions of the native people, such as this conversation about an Indian supernatural figure named D'Sonoqua:

“She is the wild woman of the woods.”

“No, she carries them to her caves; that,” pointing to a purple scar on the mountain across the bay, “is one of her caves. When she cries ‘OO-oo-oo-oeo’, Indian mothers are too frightened to move. They stand like trees, and the children go with D’Sonoqua.”

More about a statue of D'Sonoqua that Carr saw in the woods:

"Like the D’Sonoqua of the other villages she was carved into the bole of a red cedar tree. Sun and storm had bleached the wood, moss here and there softened the crudeness of the modelling; sincerity underlay every stroke. She appeared to be neither wooden nor stationary, but a singing spirit, young and fresh, passing through the jungle. No violence coarsened her; no power domineered to wither her. She was graciously feminine." (p. 68). 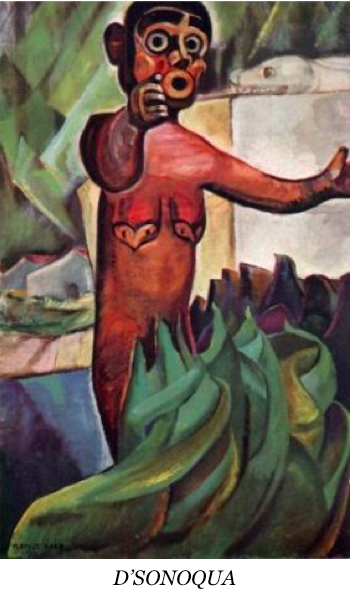 Finally what do the words of the title mean? "Klee Wyck," in the Chinook language, was the name that her native friends called her. She described the first time she heard it: she was being called by a native woman named Mrs. Wynook. She thought the call as hostile -- "Klee Wyck, come back, come back." She ran from Mrs. Wynook to the missionary woman who was hosting her in the village:

"Mrs. Wynook put her thumbs into the corners of her mouth and stretched them upwards. She pointed at me; there was a long, guttural jabber in Chinook between her and the Missionary. Finally the Missionary said, 'Klee Wyck is the Indians’ name for you. It means Laughing One.’” (p. 9).

What a terrific review! This sounds like a fascinating book. I'm not familiar with Emily Carr, so thanks for the introduction.

This is a beautiful post filled with a lot of information. Thank you.

I'd never heard of her, and these books -especially the memoir- sound fascinating. I long for the day I can go to my library and look for books.

I always appreciate your take on books. I'm off to check out yesterday's post as well. Her life sounds fascinating.

Thanks for this review. I read the Forest Lover a few years ago, and it was a nice introduction to Emily Carr for me. I have wanted to read more about her since then and see more of her art. I should check out this book.

What an honour it must have been to be given a native name. Sounds like her life was extremely adventurous.

I am not familiar with Carr or her art. The paintings with totems are very neat.