Aesop and his Fables

The Crow & the Pitcher 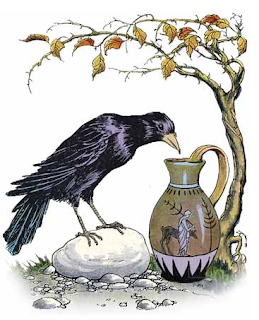 In a spell of dry weather, when the Birds could find very little to drink, a thirsty Crow found a pitcher with a little water in it. But the pitcher was high and had a narrow neck, and no matter how he tried, the Crow could not reach the water. The poor thing felt as if he must die of thirst.

Then an idea came to him. Picking up some small pebbles, he dropped them into the pitcher one by one. With each pebble the water rose a little higher until at last it was near enough so he could drink.
In a pinch a good use of our wits may help us out.

I have been thinking about Aesop and how well he is remembered in our time. Isn't it amazing that Aesop's simple stories about animals behaving like people would have such staying power, and that at least a few are known to just about all of us in the Western world? Quite a few of the fables, which number in the hundreds, use food or drink to make their point. The well-known moral of the fable of the crow is sometimes also rendered "Necessity is the mother of invention." The version I included comes from “The Aesop for Children: with Pictures by Milo Winter,” published by Rand, McNally & Co in 1919, now in the public domain, and made available by the Library of Congress. (source)
The Tortoise and the Hare was even made into a Disney cartoon in 1935! The moral of this fable is unforgettable: "Slow and Steady Wins the Race." Also unforgettable: "Look Before You Leap," the moral of The Fox and the Goat, or "Don't count your chickens before they're hatched" from The Milkmaid and her Pail. The tale of a wolf in sheep's clothing is another Aesop fable that has lasted all these centuries: the too-clever wolf, pretending to be a sheep, is slaughtered by the farmer who wants some lamb to cook for dinner. And doesn't everyone know the term "sour grapes" from the following fable?

The Fox & the Grapes 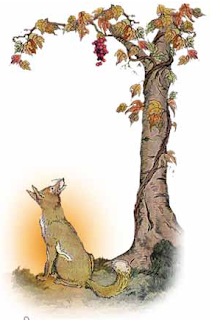 A Fox one day spied a beautiful bunch of ripe grapes hanging from a vine trained along the branches of a tree. The grapes seemed ready to burst with juice, and the Fox's mouth watered as he gazed longingly at them.


The bunch hung from a high branch, and the Fox had to jump for it. The first time he jumped he missed it by a long way. So he walked off a short distance and took a running leap at it, only to fall short once more. Again and again he tried, but in vain.

Now he sat down and looked at the grapes in disgust.

"What a fool I am," he said. "Here I am wearing myself out to get a bunch of sour grapes that are not worth gaping for."

And off he walked very, very scornfully.

There are many who pretend to despise and belittle that which is beyond their reach.

Aesop himself is most likely legendary, a convenient name to associate with the 725 fables that illustrate good behavior and good self-discipline, among other moral traits. According to tradition, Aesop was a slave, living in sixth-century BCE Athens, Greece. The details of his life vary, depending on which author's work you choose to believe -- but all the legends agree that he was a very clever person!
For a list of quotes that are frequently borrowed from Aesop, see this: 19 Everyday Expressions that Came from Aesop.
The Biblical Book of Proverbs, dating from about the same era as Aesop's fables, contains many similar morals, such as "If you make a trap for others, you will fall in it yourself," or "A gentle answer turns away wrath," but these words of wisdom don't come with entertaining animal stories to cement one's understanding of them!

I remember these two fables that learned in the primary school. I was really impressed and they stuck with me forever.

Thank you, new to me, ummm, us, Henry says thank you for the link!!

Wonderful post with great art works. Have a nice Monday.

Thank you for your comment on my blog about the art nouveau façade on the Haarlemmerdijk. That it is from 2012 is a bit a schock but now I find the Mucha portrait much finer then the winding plant stems. Stil nice work from you.

Wonderful post, Mae. It's amazing how these sayings have endured. As well as how wise they are.

Such a fascinating post Mae. This is a really fun and different T post. I loved reading the couple of fables and learning who Aesop really was. I don't think the crow story was so far off from reality either. Maybe not pebbles into a pitcher, but some crows put nuts onto roads so cars with drive over them and crack them open. I only say that because I bet Aesop might have seen something similar to inspire him. Not that I was around to know that or not. Have a great T day. Hugs-Erika

I haven't thought about these for years. Thanks for the gentle reminder.

Great post. I always loved the wisdom of Aesop's fables. You chose some good ones to share here! Have a happy T Day, Valerie

I used to have a book of Aesops Fables when I was a girl, I always enjoyed reading it,
Happy T Day
Jan X

Proverbs 30:
24 “Four things on earth are small, yet they are extremely wise: 25 Ants are creatures of little strength, yet they store up their food in the summer; 26 hyraxes are creatures of little power, yet they make their home in the crags; 27 locusts have no king, yet they advance together in ranks; 28 a lizard can be caught with the hand, yet it is found in kings’ palaces. 29 “There are three things that are stately in their stride, four that move with stately bearing: 30 a lion, mighty among beasts, who retreats before nothing; 31 a strutting rooster, a he-goat, and a king secure against revolt. 32 “If you play the fool and exalt yourself, or if you plan evil, clap your hand over your mouth! 33 For as churning cream produces butter, and as twisting the nose produces blood, so stirring up anger produces strife.”
Aesops Fables are wonderful ~ Enjoy your Tday :)

I love the fables and you are right about the staying power. What a fun post and lots of memories with these. And the illustrations you chose are beautiful!

I loved reading Aesop's Fables as a child and remember both stories- fabulous 😁. Thanks for the happy memories and wishing you a very Happy T Day! Hugs, Jo x

Now I know why I have my approach to all problems, whether math or real life. i always ask "what do I have?," "what do I need?" and go from there. Looks like the crow needed to drink the water and he had pebbles, water he couldn't reach, and tenacity. Thank you for all these wonderful tales that involved food and drink. I always love visiting because you come up with such clever T day stories and posts. Thanks for sharing these fables with us for T this Tuesday, dear.

What wonderful reminder of my childhood this post is - I used to love reading one of my mother's old books of Aesops tales. I'm sure I learnt a lot by reading them! Belated Happy T Day, Hugs, Chrisxx

A fun and interesting post. The stories brought back happy memories of reading some of these tales. Happy T Day