India is an unknown territory: I have never been there, and have read only a few books about the country. Thus, I enjoyed the first of Sujata Massey's Perveen Mistry mystery series (blogged here). Conveniently the name Mistry is a common surname in the Parsee community of Bombay to which Perveen's family belongs!

The Perveen Mistry novels are set in British-ruled India 100 years ago. Perveen, the central character, is a woman lawyer and detective. She's well-qualified to practice law, as she studied British law at Oxford before returning to Bombay to work in her father's legal practice.  Her professional opportunities were very limited, though, because women had very few rights. Unsurprisingly, she was a believer in women's rights, as well as an admirer of Gandhi, who was already an active Indian independence advocate at the time. Fascinatingly, while Perveen is of course a character invented for the mystery series, an actual pioneering woman lawyer was active in Bombay at the time: see "The veiled history of India's first woman lawyer." 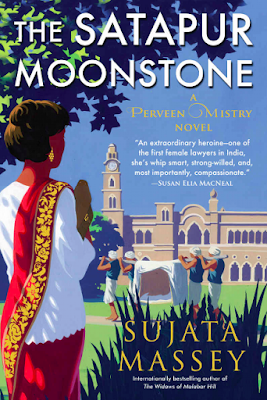 I have just read and very much liked the second in the series: The Satapur Moonstone. It begins when Perveen, the only woman lawyer in the entire area, is hired as a representative of the Raj by the British authorities. Her assignment is to travel to a very remote (fictitious) principality called Satapur, in order to interview the female members of the royal family there. These women live in a separate area of the palace called the zenana. Traditionally, women stayed in these restricted quarters "from the day they enter as brides until they die." (p. 72).

Arriving at the palace after an arduous journey by train and uncomfortable palanquin, Perveen meets the elderly dowager queen mother and the younger widow of the most recent maharajah. They are isolated in the zenana and do not speak to men from outside their family. These two women disagree about how they will educate their ten-year-old son/grandson who has inherited the throne. His education is a matter of concern for the British rulers, who have quite a lot of power despite the nominal independence of Satapur, and thus Perveen's job is to survey the situation and propose a compromise. Not easy!

As expected in a mystery novel, Perveen discovers many family secrets and tragedies in her effort to negotiate with the two widowed maharanis. She shows great bravery in the face of physical danger and cleverness avoiding a poisoner; she shows tact and cultural sensitivity in dealing with the princely family, she understands their Hindu religious beliefs though she is Parsi, and she is very cautious in her dealings with the British officials. Eventually she solves the mystery of the identity of several of the characters, which is foreshadowed by the mysterious moonstone necklace that was entrusted to her near the beginning of the book. It's a well-plotted and interesting book to read, and I'm looking forward to the next in the series which is scheduled to publish in a few months.

In my reading life, besides nice escape fiction, I have been checking out some studies of foodways in India, and I found the author's descriptions of Perveen's meals very interesting in this context. Although I have eaten in American and British Indian restaurants, this does not mean I know anything about the important cultural meanings of food in India today or 100 years ago. The rigid caste system dictated many cooking and dining practices. Ruling families of the highest caste had separate food and dishes from their servants, and could not eat with lower caste people, nor could they have cooks who belonged to an inappropriate caste.

Food prohibitions were numerous. Some individuals and castes were vegetarian and of course no Hindus could eat beef -- in fact, Perveen makes a major error just by carrying a leather brief case with her government documents. Furthermore, British officials dealt with life in India by a combination of adaptation and sticking to their own ways, such as an English breakfast served to Perveen at a club in Bombay -- "The eggs looked fluffy, the toast appropriately buttered, but Perveen did not like kippers." (p. 4).

As Perveen travels, she must eat, and the author provides us with many descriptions of her meals, from dinners in the royal palace to poor food from a village food stall. For example, Rama, the cook at the home of Colin Sandringham, the British agent for Satapur, has a limited repertoire. As the dinner hour approaches, he says to Perveen:

Perveen opts for smothered chicken, which was quite tasty: "The chicken had been smothered with sliced onions, which had melted into soft sweetness that offset the savory, salty flavor of the bird." (p. 26).

Returning to Colin Sandringham's official residence much later, during her adventures, an exhausted Perveen is served again by Rama, who has been a major help and clever companion as well as a cook. Piles of small leaf-wrapped foods were served on a plate:

"Guessing they were rice pancakes wrapped in banana leaves, she gave a sigh of pleasure. 'Panki! I thought this was only a Gujarati dish.' 'Gujarat is not so far. Recipes travel through the mountains like the birds,' Rama said with an elegant movement of his hand. 'I will prepare a full dinner after this. What kind of chicken tonight?'" (pp. 229-230).

At the home of a rich but not high-caste woman named Vandana, Perveen ate kande pohe: "a mixture of pounded rice, tiny chilies, bits of tomato, curry leaves, and spices, which was delicious, especially with a fried egg served on the side, and a big saucer of the same purple berries that had been served at the circuit house but dusted all over with white sugar." (pp. 92-93).

Indian breakfasts contrast to the British eggs and kippers in the first scene of the novel -- here's the one Perveen is served at the Satapur palace, presented by the maharani's cook: "He pointed out vegetable cutlets cooked to golden perfection, a thick dal laden with sweet raisins, a rich curry of cauliflower and tomato, and pohe, the same beaten-rice dish Vandana had served. It must have been an area specialty. There were also puffy puris and crisp parathas, velvety scrambled eggs and plain hard-boiled ones, and a tall pitcher of fresh lime juice." (p. 163).

In another scene at the palace, the child princess chooses her meal from the dishes served to the royals:

While traveling, Perveen and her palanquin bearers stop at a poor village:

"A sturdy man in rough peasant clothing was making millet rotis.... She drank her tea and took the roti that was given to her first, a mark of respect. The bearers were served next and ate hungrily." (p. 216).

Food in The Satapur Moonstone definitely contributes to the believable atmosphere of the novel. In a later post, I'll write about my ongoing reading, including studies about the development of a national cuisine from India's many regional foods, and reviews of numerous cookbooks that never reach American kitchens. I found it especially interesting that exchange of foods and recipes among princely families in colonial India took place frequently because the male rulers often married women (or in fact girls) from distant principalities, and the wives and their accompanying servants introduced new foods and recipes into their new homes.

So many interesting topics come up in these books, like the globalization of curry, which originated in South Asia and is now common in so many contexts like British curry houses, German currywurst stands, Caribbean and Japanese dishes, and so many others. Sadly, Indian restaurants in my midwestern town seem to fit the stereotype of having vats or red, grey, and brown sauce that they pour over whatever you order and call it by an exotic name.

I feel silly trying to cook foods that I have never tasted, especially since Indian recipes call for many ingredients that are virtually unobtainable here, but I have tried a few.

This sounds like a series I'd love -- especially if set during the period of the Raj and with a strong female character. The food descriptions have my mouth watering.

What can I say, I'm hungry ! I miss Indian restaurants, even if we regularly eat dahls and currys home. That rice pudding looks delicious ! Oh and yes, I'd love to read the book ;)

I agree that the inclusion of food and food descriptions in books helps bring the story to life. This series does sound good, though I admit I've never had anything called "rice pudding" that I've liked lol

This sounds like an outstanding series! Thanks for the introduction Mae, and I've got the first one ordered. You can't go too wrong with a good rice pudding, a true comfort food.

I agree with some of the others, that the descriptions of food in the story does bring it is to life. Good for you for trying knew foods. It looks good to me.

Sounds like an interesting book. I haven't been to India either. Nor does my husband like Indian food so I rarely get it, but I've read a few stories set there, and had a few snacks when I had Indian students in class. Means I'm about the same place you are when it comes to knowing about the country.

Given our large Indian community in South Africa, many of the dishes you mention are familiar to me. Thankfully we can get all the spices here and I wish it were simple enough for me to post you some.

There's so much to read out there I'm trying to be a bit more selective. That being said, this novel sounds interesting. I'm always interested in a novel that has lots of food references in it.

Historical fiction is my genre of choice and I love learning the history of other countries. I may have to look this series up.