The Nature of Desert Nature by Gary Paul Nabhan is a collection of essays and other writings about the plant and animal life, the geology, the beauty, the religious inspiration, and the poetry of deserts. The subtitle, "A Deep History of Everything that Sticks, Stinks, Stings, Sings, Swings, Springs, or Clings in Arid Landscapes" indicates the variety of information included in the many writings. Understanding the nature of deserts is important, Nabhan writes, because:

"The ongoing discussion about deserts... has generated and refined a certain set of questions that may be more pertinent to our own survival today more than ever before. That is because of the degree to which global climate change is already forcing an ever-larger proportion of the world’s human inhabitants to deal with ﻿ever more hot, dry, and sparsely vegetated landscapes. These recently desertified, or biologically impoverished landscapes—which often lack the integrity and diversity found in ancient deserts—are becoming all too common on every one of the major continents." (p. 9).

In order to clarify the nature of deserts, Nabhan has selected a wide variety of viewpoints and specialties. Some authors present the overwhelming impressions, both mental and spiritual, of experiencing life in the desert, whether they are describing a camping trip or a life lived in a monastery in a desert climate. Several authors are particularly aware of the cruel deaths that have taken place as migrants trying to enter the US are destroyed by the harsh desert heat, cold, and lack of water. The book includes scientific discussions by researchers who have spent their entire careers in the study of desert plants and animals, especially in understanding how all the various forms of life in the desert work together to survive extreme conditions. Each author has a unique view of deserts.
Most of the experiences presented in The Nature of Desert Nature took place in the Sonora Desert, which extends on both sides of the US-Mexican border. Tucson, Arizona, is in the most northern part of the Sonora Desert, including Saguaro National Park and other nature preservation areas. I've been to this desert, and I would love to return, so I especially enjoyed learning about the flowers, cactus, symbiotic insects and animals, and water resources of this desert. In fact, I liked all the chapters, but I can't go into detail about them.
I will just concentrate on the last chapter by Paul Mirocha titled "Staring at the Walls: Views of the Desert in Southern Arizona Public Art." The text is illustrated with a collection of photos of murals from Tucson and in Ajo, Arizona. These impressive paintings reflect many different views of the desert and the people who live there. "Humans all over the world have been making petroglyphs and pictographs for at least thirty thousand years (probably longer)," Mirocha writes, and "Public art is free and visible to everyone. It’s democratic and gains its creative power from being multicultural. By its existence and widespread acclaim, public art, in a sense, has been voted on." (p. 176-177)
Here are a few of the illustrations. If you love murals, you will love this chapter, which makes many connections between the artists, the cities, and the desert scenes and myths that they have painted.
About this mural Mirocha says: "The agave woman on the walls of Tucson’s Benjamin Supply building is the Mexican agave goddess, Mayahuel, well-known even in these northern parts. She is one of several mother and fertility goddesses in Aztec spirituality, a personification of beauty, nourishment, and fruitfulness. She is also the artist’s girlfriend. The image is riveting, hot and spicy as heck."(p. 183).
This mural seems to me to capture an entirely different view of the desert. I like the turtle and many plants growing at the foot of the saguaro cactuses, the people doing something (I don't know what), and the birds in the sky. I do not understand the maze at the right, and would love to know what it means. The author writes:

"O’odham artist Michael Chiago’s work, hidden behind the Curley School in Ajo. The landscape is painted carefully, like a portrait of a well-known friend. O’odham people are shown in a landscape carefully observed, with everything in its place. There are the little bursage bushes, palo verdes, and saguaros. The vast emptiness of the landscape is saturated with both knowledge and love. The sense of being at home, safe, in a familiar place is palpable." (p. 182)

"Such mural art could be an urban scene anywhere, couldn’t it? Not likely—there’s only one place where people recognize a Gila monster, a jackalope, or a javelina. And where else do they know how to pronounce saguaro, ocotillo, or Gila? That place is the Sonoran ﻿Desert. ﻿There’s a desert on the edge of town, and it wants to seep quietly into your mind, to remind you where you are" (p. 175). 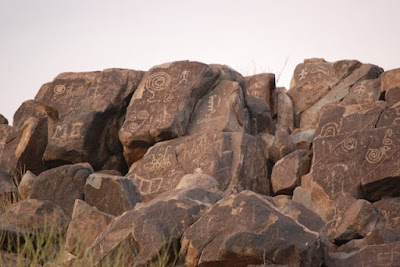 Petroglyphs by the Hohokum Indians, Saguaro National Park, Tucson, Arizona, 2009.
It's hard to capture the charm and fascination that I find in this very diverse collection of writings. It really makes me want to return to the desert for birdwatching, enjoying the scenery, and more.
This review © 2021 by mae sander.
Posted by Mae Travels at 6:00 AM

Beep-beep (sorry, can´t help that, beautiful mural with the roadrunner and snake).
Great post, I miss the desert as much as the ocean.

When I read the title (fast) I thought (with reason) that it was on the nature of dessert. Well, you HAVE had a food theme and I was thinking dessert at the English breakfast/brunch buffet.

I've never particularly liked the desert because it's hot and there are scorpios and snakes. Besides, for a French country girl like me, a roadrunner is a cartoon character closely followed (or at least, he tries to !) by a coyote. I'd never seen a real one ! But how life survives and develops in deserts is highly interesting and those murals are superb and colourful. How deserts are becoming impoverished is truly sad. Thanks for sharing :)

Mae, we have never been to the desert southwest and it's always been on the lost of places we want to explore. Love the roadrunner photo as well as the roadrunner mural. Interesting book.

We are in Stephen Foster Cultural park right now enjoying the weather and historic buildings.

Hi Mae, The murals are quite amazing. The Nature of Desert Nature sounds like a very interesting book. Thank you for telling us about it. Your last two photos are great. Thanks for sharing. Have a good weekend and stay safe. John

I never knew the road runner was a real bird. I've never heard of one other than in cartoon form. Thanks for enlightening me.

The book looks really interesting. I love the murals. The Roadrunner is one of my favorite birds, I was able to see it in New Mexico. I would like to see the Petroglyphs in person some day! Thank you for linking up and sharing your post. Take care, enjoy your weekend! I appreciate the visit and comment.

Hello,:=) The desert has always fascinated me, and the creatures that survive there in such extreme temperatures.The Petroglyphs are so interesting. I like the mural, the Roadrunner is a funny looking bird
it makes me smile whenever I see it.

It appears I'm once again running behind visiting your blog. I'll be by tomorrow (Sunday) to catch up on what I've missed. At least that's the plan, anyway, Mae.

We spent a week in Sedona last fall, a trip in which we carefully avoided all people and hiked most of the time in remote areas. We are talking about planning a rock hunting trip for this summer, after we have received our second vaccination.

There is something wonderful about the silence of the desert. Many of the great mystics have gone to the desert.

One of the best books I've read about the desert experience is Desert Solitaire by Edward Abbey.

I have not been to the desert except to pass by. This looks like a book I would like to read.

This book's topic looks fascinating. I think I should get myself to be more an essay reader. I love you photos today. The murals are great and I like seeing your photos too. Hope your having a nice Saturday Mae.

I am a succulent and cacti hoarder so I think I would like to read this--to read about their natural environments. The Agave Woman mural was featured on the cover of Deep Breathing by G. Davies Jandrey that I reviewed in 2019. Love the other featured murals.

I absolutely LOVE this, Mae. I love how the author writes that public art is free and accessible to all. I never thought of murals in that sense before, but it puts it in perspective. I especially like the roadrunner and the cacti. Although they are not my favorite, you certainly see a LOT of snakes in the desert.

The murals are great...such beautiful art! I loved seeing Roadrunners when we lived in New Mexico...years ago!

I grew up in Scottsdale, Arizona and hated everything about it. Only now, as an adult no longer living there,can I appreciate the beauty of the desert.

I do love seeing roadrunners and was thrilled when I saw one right here in my Mom's yard in Arkansas! Glad you got to see one as well.

I like nature books so I'll have to put this one on my tbr list. Thanks for sharing. See what I read at Girl Who Reads

I love those murals. Wow. Stunning. I first read your title as DESSERT Nature. So imagine my shock when I looked at the photos. Ha! My Sunday Salon post this week

Fantastic trio Mae, I quite like the first one, just because snakes scare me, but it's a brilliant one too :)
Just like Iris I've only seen the roadrunner in cartoons, so glad you actually saw them.
Thanks for participating in Monday Murals.

I’ll, have to make a note of this title because Geography will be a category for next year’s Nonfiction Reader Challenge!