A Meditation is not History

"Bread followed paths that took it through space and time, memory and oblivion. It is hard to say where these journeys begin and where they end. Most often they moved from east to west, following the sun. Sometimes the paths returned the same way, at others they took a different route, all the while crossing plains, scaling mountains, roaming deserts. Grain was transported across seas and along rivers by ship, and on land by carts and packhorses, and even on the shoulders of men and women. Travellers, merchants and caravans all passed through these crossroads, evoked by prophets, preachers and poets. Futile though it often is, let us try to imagine what the past was like in prehistoric times, for memories of those times have been preserved in stories and legends." -- first paragraph of Our Daily Bread. 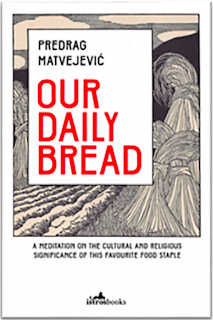 Our Daily Bread by Predrag Matvejević is subtitled "A meditation on the cultural and symbolic significance of bread throughout history." While the book is full of references to historic events and to literature and religious teachings about bread, it is most definitely not a history book.

As I read Our Daily Bread, I had to get used to its highly subjective and religious point of view. The chronological consistency that normally appears in a historical document is not maintained here, although the presentation sometimes gave me mistaken expectations about a seemingly scholarly work. This book is a meditation, not a history and not an analysis.

There are passages, for example, where history and fiction are cited as equals, and where time and place are all mixed up, such as this:

"In old Cordoba, on the banks of the Guadalquivir, there was a bakers’ quarter known in Arabic as Rabad ar-rakkakin. It was said that this was where the best bread in Andalusia could be found. It was near a 'sweet basil shop,' khavanit ar-reihan, just a few steps away from the 'garden of wonders,' Munjet al-adjab. Cordobans came here to get good bread. Before tasting it, they would first wash their hands and rinse their mouths with fresh water at one of the surrounding fountains. They did not cut the bread with a knife, rather they tore off pieces, eating them one by one. During the reign of the Umayyads, Cordoba numbered some twenty quarters along the banks of its great river before it was destroyed in the month of shawwal in the year 633 of the Hijri (1236 ce). The bakers’ quarter was famous, and everyone knew about it and that the way to enter was through the gate of Saragossa, bab Saraqusta. Ebu-l-Walid Muhammad ibn Ahmed Muhammad ibn Rushd walked the streets: 'it would take a hundred years for that long name to become Averroes,' twentieth-century author Jorge Luis Borges remarked in his short story 'The Aleph.' He reminded us that the philosopher’s ancestors had come from the dry deserts of Arabia, and therefore liked to listen to the gurgling sound of water, especially when it came from a fountain in a hidden courtyard. Averroes knew about the neighbouring bakeries, where another frequenter was Ha-Rav Moshe ben Maimon, better known as Maimonides. This Jewish philosopher and physician, a native of Cordoba, wrote Commentary on the Mishnah in Arabic. In times of yore, the legends of Arabs and Jews, both Semites, converged around a loaf of bread. Cordoba was a prime example of this; perhaps that is why it was destroyed."

This passage illustrates several characteristics of  Matvejević's writing style besides the mixture of historic fact with openly fantastic fiction and mythic beliefs. He LOVES to use obscure foreign words! He drops names of famous and not-so-famous characters from the past. And he jumps around in locale and in time periods. I didn't edit the above: it's really all one continuous paragraph. The last phrase: "perhaps that is why [Cordoba] was destroyed" can only be interpreted as a religious belief.

The author sometimes admits to his choice of a pastiche, not a historical disciplined narrative: "for this occasion it might be best to resort to the literary methods known in Formalism as montage and citation in order to present them, that is to listing facts and quotes and summarizing them according to need and purpose," he says on one occasion. Or "Literature has preserved bread as something real and something imagined." Definitely not the method of a scholar. Also, he doesn't use citations, and in his final chapter when he lists his sources, they are sources of inspiration, not sources for his "facts" -- which aren't always facts anyway.

Here's a funny example of "facts" -- he mentions that ancient Egyptian beer "was sometimes seen as liquid bread, since both were made with barley. Presumably, not enough hops grew near the desert!" A quick fact-check reveals that the earliest use of hops was in the 9th century of the current era; that is, a couple of thousand years later. So his explanation is a bit strange.

Matvejević's love of words and derivations is also rather mystical. As I pointed out, he loves to quote obscure terms from obscure languages, and to quote ancient speculations on word derivations, never quoting modern linguistic science. He cites Arabic words "teeming with consonants: bdsh, hts, pzn, dpt. Although nobody knows how they were pronounced." Presumably he's literally ignorant, or perhaps willfully ignorant, of the fact that Arabic orthography doesn't use any vowels, which explains this mystery. In exploring words for various types of bread in another single-paragraph digression he ranges from very ancient Egypt to Herodotus, who lived a thousand years later.

"The historical approach questions and scrutinizes, while the theological reveals and believes. Christ, whose historical existence has been proven, cannot be measured against the idea of Christ in the Christian faith," Matvejević writes. As a Christian book Our Daily Bread reflects the author's faith. For example, he adopts the fundamentalist view that Jewish religious ritual has remained unchanged for the last 2000 years. Thus in discussing the Last Supper, he cites the Haggadah, which dates from the 10th or 11th century after the founding of Christianity, so doesn't actually apply to the Last Supper if you are a literalist. He also cites modern Orthodox Jewish rituals for matzoh-making (which are maybe 100 years old) when discussing the customs of Biblical times, which is a religious, not a historical choice on his part. Similar non-historic passages are also present in regard to other subjects. Or maybe these are  just the choice of a writer who can't be bothered to look things up. Sometimes this annoyed me, but I tried to be tolerant.

Predrag Matvejević (1932-2017) was a literary scholar who had academic appointments in Zagreb, Paris, and Rome. His list of publications is long. He was born in the Kingdom of Yugoslavia in the area that now belongs to Croatia, and his ethnic background included Russian, Yugoslav, Croatian, Hertzegovinian, and Ukrainian elements. Our Daily Bread was first published in Croatian in 2009. The English version, published in 2020, was translated by Christina Pribichevich-Zorić.

I have read a number of books on bread, all of which I would recommend more highly than this one. I have found very few reviews of this book, and the other readers were very impressed because of all the "facts" and quotations, and because they see it as poetic. My reaction is different.

Thank yo for this insightful and honest review. You've brought up some interesting points.

OK. Not going into my TBR pile. (Sometimes literary scholars can be quite long-winded, didactic, egocentric or all of the above.) :)

Interestin read, thanks for sharing.

I doubt I would have read the entire book. Your review is one I would trust over any other and I hope you give a shortened version on the site where you purchased the book.

Bread has such a special place in history, and it's interesting to see a book that takes this approach. I googled the author, whose background was in literature with a doctoral thesis on "socially engaged poetry" hmmm, so maybe he was attempting a poetic literary look at the subject. Odd, at any rate.

I can see where you would be disappointed when you go into a book expecting one thing and getting another.