Zone out. Open The Artists' and Writers' Cookbook. Open it to any page, or begin at the beginning. Read a brief food memory from the life of an author, a poet, a photographer, an installation artist, or another creative person. On the next page, you will read a few paragraphs from a completely different personality in a different world. Also, you will see a recipe from each one. Some of these memoir writers describe much-loved dishes and happy food moments. Some are passionate about particular dishes. Others don't actually love food, or they have mixed feelings about the dishes they have eaten or about childhood experiences.
Zone out, read on to the next vignette, be in the moment. Don't worry if the foods are unfamiliar or the recipes very conventional or very weird. Don't worry about whether you have heard of a particular writer or seen the work of a particular artist: or even whether you have met them or heard them give a reading. Some of the obscure memoirists present more vivid food stories than the more famous ones. Just be in the moment.
When I first flipped through the pages of my new copy of The Artists' and Writers' Cookbook by Natalie Eve Garrett, I thought it looked overwhelming -- incoherent, diffuse, unfocused, unapproachable. (It was published 2016 and I've been meaning to read it every since, and I thank the blogger Eliot who jogged me into buying it!) At first, I felt jerked around by the change from one point of view to another. The points of view ranged from super-serious to totally satirical, and the recipes were the same way. Every writer had a different approach to giving a recipe. Some were enormously labor-intensive, some full of pre-made ingredients. The range included recipes that sounded delicious, disgusting, nostalgic, or even pathetic.
The writers and the accomplishments that qualified them varied widely, including some that I had heard of, others completely unfamiliar. In the case of one author, I not only had met him, but even had dinner with him once; however, he certainly wasn't writing about the food we ate together! Another writer, whom I never heard of, wrote about Cafe Pasqual in Santa Fe --a place I ate once and loved, and then went back a few years later and was very disappointed. Author Ruth Ozeki wrote about the experience that she transformed into her wonderful first novel My Year of Meats. As I read through the vignettes, I enjoyed the constant changes in locale: rural Puerto Rico; Knoxville, Tennessee; Cape Cod, Massachusetts; various neighborhoods of New York City; Calcutta, India; urban Iran during wartime; Vietnam as experienced by a city child and by an American soldier; and many others.
I had to zone out. I had to empty my mind and just read one after another. Then I liked it.
Authenticity is of course a recurring theme of the many writers who come from such a variety of places. Peter Ho Davies writes "I like to think the dishes I'm eating are authentic" but then identifies one of his real food identities as "U.S.Chinese food... popular with and produced for a largely non-Chinese clientele of hungry white prospectors and their hangers-on" in the early days, and continues to evolve (p. 114). Another writer discusses the question of authenticity in the context of Ethiopian food, and quotes Ficre, an Eritrean chef:

"Tricky word, authentic.... Tricky idea. Food ideas move around the world very quickly today, and if you went to Eritrea today, you'd find American touches here and there. There are thousands of Eritreans living in the United States, and when they go home, they take new food ideas with them. For us, that's no more foreign than pasta once was." (p.112)

Read The Artists' and Writers' Cookbook. You can get lost in its wild variety. 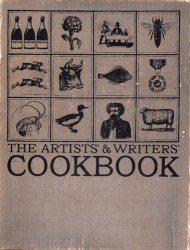 In 1961, a group of editors compiled the first Artists' and Writers' Cookbook, a volume I would love to see. Despite the somewhat high price tag, I've ordered a copy, and will report back when I have it in hand.  (A few less-than-astronomically priced copies have suddenly become available.)

An illustrated cookbook with 19th-century engravings and original drawings by Marcel Duchamp, Robert Osborn, and Alexandre Istrati. It features 220 recipes and 30 courses by 55 painters, 61 novelists, 15 sculptors, and 19 poets, including such luminaries as Man Ray, John Keats, Marcel Duchamp, Lawrence Durrell, Robert Graves, Harper Lee, Irving Stone, William Styron, and Georges Simenon. The diverse contributors take the assignment with various degrees of seriousness, some sharing their recipes in earnest and others using the cookbook as a canvas for wit and creative deviation, but all having invariable and obvious fun with the project.

It sounds interesting. Food really sparks connections and memories. It's interesting you even had some real connections to the book. I'll be curious to see how the first one is compared to this one.

This is the type of book I would read in bits and pieces. I hope the cost of the one you've just ordered is worth it.

This review speaks to me on so many levels. I just put the book on my Amazon wish list. I wonder how long it will be before I hit "buy".

What a good review, Mae. And it sounds like an interesting book so long as you do -- zone out! I could see this being a "read now and then" book, the kind you pick up and don't have to "remember" what came before. Thanks for the review and recommendation.

You really nailed it---this is Zen reading---just zone out and go with it. I loved your review. I am so excited that you ordered the 1961 copy! Cannot wait to read your review of that one. Be safe and well!

This looks like a must have. I love food writing of almost any sort, particularly when paired with recipes. I dearly miss M.F.K. Fischer. What fun she was to read!

I really love books like this where people share their food memories and recipes. Thanks for posting about it and sharing it with Weekend Cooking.

It would be interesting to see what was paired with each artist and writer.

i actually bought this book recently but it didn't thrill me at all and i am going to get rid of it. i had no clue about any of these artist and writers and nothing excited me sadly. oh well... that's life.