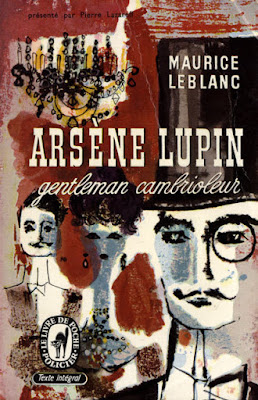 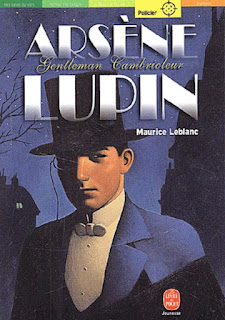 Arsène Lupin: Gentleman Burglar by Maurice Leblanc is one of twenty four books about the fictitious criminal named Arsène Lupin, a series that began in 1905. There are a huge number of editions of these books with a wide variety of covers, usually featuring Lupin with his gentlemanly top hat. In France, it remains as popular as the contemporary Sherlock Holmes stories in England, or as the slightly later novels by Agatha Christie, though now that I've read one, I understand why Arsène Lupin is not as popular in English-speaking countries as these stories.

I read this book out of curiosity after watching the five available episodes of the new Netflix series "Lupin." Unfortunately, I don't think the original is as enjoyable as the reinterpretation, featuring a twenty-first century gentleman thief who models his exploits on the very popular original. The plot is complicated, but not very suspenseful, there are too many servants and policemen, the Paris local color is lacking (although it is set in Paris), and the dialog is stilted. Here's a sample:

"'That power of fascination which some men exercise on women is one of those mysteries which science should investigate before it does anything else,' said the Duke, in a reflective tone." (p. 148, Kindle Edition).

In the new "Lupin" series, the elusive burglar is shown laboriously creating his elaborate and ingenious disguises by using makeup and false facial features. The original Lupin can change his appearance in seconds with no clear effort, which isn't very convincing. Food scenes (which I always look for in detective fiction) are disappointing as well. The author includes little detail: "Jean took two bottles of wine, a rich-looking pie, a sweet, and carried them to the drawing-room." (p. 62). Or at the end, after Arsène has been running away from the police all night, this is all we learn:

"He fell upon his breakfast with the appetite but not the manners of a wolf. ... Victoire hovered about him, pouring out his coffee and putting sugar into it.

I'll have to check out the netflix series. I do like vintage crime and mysteries (like the wonderful British Crime Library series) but sometimes it just doesn't work quite so well! Alas.... no food!

I've watched the first 2 episodes, it definitely has twists and turns in it, lots of surprises and good acting. I'm sort of surprised about your review of the book, thought it might be as intriguing as the show. Assane going from janitor to gentleman is a master of disguises for sure! Good show so far from what I've watched. Too bad with the lame food scenes in the book, I always enjoy those scenes in books, movies; I won't be reading the book though...

Based on your recommendation in a prior post, TheHub and I started watching Lupin. We are completely hooked on the series and it is our nightly entertainment now. Thank you for the recommendation and noe I must start reading the books.!

By jove is such an English term I would not expect it to be uttered in France.

I should have waited on part of my comment. We started this series and it is quite enjoyable so far. And I am very glad to learn about these books. Not sure I will read them, but interested to know Assan in the series has read actual books.

My father was a fan of Arsène Lupin. We had all his novels home and I grew up watching the French TV series with Georges Descrières :)

We watched the 1st 2 episodes of the Netflix series and found it slow. We also expected more humor for some reason... We're not giving up on it. I should read the book, or at least give it a try.