"Savoring the Past" by Barbara Ketcham Wheaton 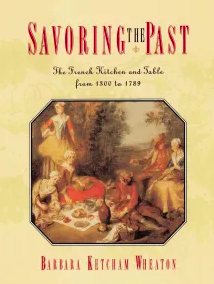 Savoring the Past: The French Kitchen and Table from 1300 to 1789 by Barbara Ketcham Wheaton (pub. 1983) is a detailed and fascinating account of the development of French cuisine. The book describes court banquets, royal kitchens, lavish table settings, and luxury foods as well as French bourgeois cuisine, French cookbooks and literature about food, French restaurants, and more. I enjoyed reading the book, and I enjoyed the many historic illustrations of kitchens, cooking equipment, and other related images, such as the one at the beginning of this blog post.

Wheaton includes much general information, but also many delightful anecdotes and brief biographies of culinary personalities. Two such figures that I found particularly interesting were the seventeenth-century chef François Vatel and the 18th-19th century restaurant critic Grimod de La Reynière. Rather than a complete review of this excellent book, I'll just tell you about them. 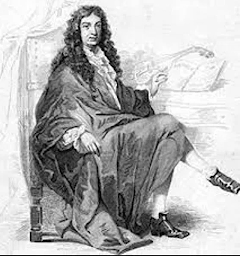 Vatel, one of the most renowned chefs of his era, is best remembered for the drama of his death. The simple version of this story, repeated in many works on cooks and cooking, is that he was preparing a banquet for a fête at Chantilly, and learned that his shipments of fresh seafood had failed to arrive. As a result, he would have nothing to serve his employer's guests. In a panic, he threw himself on his sword and died rather than face such shame. Wheaton quotes a letter from Madame de Sévigné:


"You may imagine the horrible disorder which such a terrible misfortune caused to the fête. Imagine that the fish arrived perhaps just as he died." (p. 145)

In reading Wheaton's account, I was delighted to learn that long before his iconic death, Vatel worked at the chateau of Vaux-le-Vicomte near Paris. Vaux is a beautiful building in the midst of some of the most spectacular gardens I have ever seen.  Vatel worked there during the very brief time that Nicolas Fouquet, its original owner, was able to enjoy this magnificent property. Fouquet was a high financial official at the court of Louis XIV, which gave him access to a lot of money. He commissioned some of the finest architects and designers to create a magnificent chateau and garden, and hired Vatel to run his kitchen.

In 1661, Fouquet put on a lavish banquet at Vaux, organized by Vatel, and invited the king to attend.  (Unfortunately, Wheaton says, there is no record of the food that was served.) Fouquet's success inspired jealousy and plots against him, particularly from the well-known official Jean-Baptiste Colbert, a rival at court. The king had already been convinced by Fouquet's rivals that Fouquet was embezzling royal funds. He was sure that the riches on display at Vaux for all to see came from dishonest dealings. Fouquet was sentenced to life in prison where he soon died.


"Out of the wreckage of Fouquet's establishment at Vaux-le-Vicomte much of the key personnel had been recruited to work at Versailles. But Vatel, the maitre d'hôtel, was not among them. It is believed that he left the country for a while. In 1669 he reappeared in the service of the prince de Condé as comptroller of the household at Chantilly. The following year, ... the prince invited the king and all the court to visit Chantilly for a three-day festival. Nine years had passed since Fouquet's ill-starred festival at Vaux. Was Vatel still haunted by the memory of it?" (p. 144)

The festival began with a feast to which an unexpected number of diners showed up, and not enough roasts were available, though the king's table was amply supplied. Vatel's reaction was "I have lost my honor." The next day, despite assurances from the prince that everything was fine, Vatel was frantic. The first shipment of seafood was inadequate, and he feared that no more were on the way. Tragedy! Thus ended the dramatic story of this famous culinary figure, remembered more for his death than for his life.

Question: Who wrote the first restaurant guide?
Answer: Grimod de La Reynière, who single-handedly developed many still-useful methods of reviewing restaurants and writing about food. The Almanach des Gourmands was the name of Grimod's highly original serial publication (1803-1812) that gave advice about choosing among the many newly opening restaurants in Paris.

Wheaton offers a fascinating account of the quirky life of this writer. His parents were very rich: his father was the administrator of postal services, and his mother was "of higher rank than his father and exceedingly arrogant." They had a fine house on the Champs Elysées.  Grimod's education was in the field of law, but his interest was in theater, and he found rather unusual ways to express this interest.

In 1783, Grimod hosted a banquet at his parents' home that "achieved notoriety and at the same time a measure of revenge upon his parents." The black-bordered invitations to this event were in the form of funeral invitations. Like a modern rebellious kid, he got his parents out of the house for this party. Sixteen guests were seated at a table whose centerpiece was in the form of a catafalque (the support used for the coffin during a funeral service). In a balcony overlooking the dining room a number of invited spectators filed through to watch the event, which was a kind of parody of a court banquet. There were between nine and twenty formal courses consisting of many dishes. One included only dishes of pork, another dishes made with oil, all completely out-of-bounds in their level of disrespect for convention. At the end of the evening: actually at 3 AM, the guests tried to leave but found themselves locked in. Eventually, they left "bringing to an end a prime example of the dinner party as an act of aggression." (p. 227)

These irreverent theatrics continued after his father died and left him a large inheritance. These activities included running a food shop, writing theater reviews (and having affairs with actresses), and more. Wheaton's book includes only material about French cuisine until the Revolution, so it doesn't include his later and more famous accomplishment as a food writer and restaurant reviewer or the less dramatic end of his relatively long life.
Grimod's restaurant reviewing involved having restaurants and caterers send him food, which he sampled and judged with 12 friends. He wrote up his impressions in his Almanach des Gourmands, which appeared each year. At the time he began, in 1803, the institution of the restaurant as we now know it was just being invented in Paris, so he was really on the cutting edge! Later he published a book of advice for restaurants called Manual for Hosts. I'm frustrated because there are no easily available copies of these works, and no English translations. Eventually, when libraries are more accessible, I hope to see some of the original French editions.

I remember really liking that book when I read it back in the 80s or 90s. I should give it another look.

That's an interesting subject matter. I would have guessed it was a more academic book but you don't make it sound like that. But then the French are known for their food and it had to start someplace. Thanks for sharing.

Yes, dinner parties can sometimes be a form of punishment. I'm thinking of work dinners in the past that I had to attend.
I checked our library and there isn't a digital copy nor hard copy.

This book really does sound interesting, and entertaining as well. I'm going to see if I can round up a copy, maybe at the library.

Sounds like an extremely interesting book of the history of French cuisine and the first time I heard the story of his death which I probably will not forget!

I will read your reviews of the French books, if you can find them, as I am interested to see how he reviewed restaurants.

Wow, I never knew there was an "Almanach des Gourmands"!
And Louis de Funés is back in my mind!

How interesting. You find the most fascinating books. I never really thought about the first critic. Someone had to be! I might be on a bit of a hunt!

I'm trying to play catch up, but may not, since I only have 10 more minutes before Sally kicks me out of her house. This is fascinating about the restaurant critics and how that all came about. You certainly love your French chefs and restaurants.

I read this book yaers ago. I pulled a quote from it that I posted all the kitchens that I worked. But I cannot recall whose quote it was. Can anyone help?
I don't remember now, but I may have paraphrased too.

"A good cook…
must know exactly the properties of everything he uses, so that he can correct or perfect the foods which nature presents to us raw.

He should add to that a sound judgement, a sure taste and a delicate palate, so that he can skillfully adjust both ingredients and proportions…

Let us add the manual dexterity to work neatly, and an assiduous attention to the master’s taste whose palate should become his own."

If anyone can find out who said this, I'd be forever grateful!