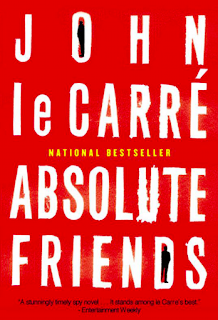 Reading while locked down in anti-pandemic isolation, I decided to consume some escape fiction, specifically, Absolute Friends by John le Carré. Although it was published in 2003, and takes place up until maybe 2002, its time frame is mainly during the Cold War. I haven't read anything by le Carré in a long time, though I do remember some of his other books as well as the movies based on them.

While I did enjoy le Carré's portrayal of the 1960s and 1970s from the point of view of a young person, I thought it was a little too detailed about things that don't really affect the plot -- and while reading, I couldn't see how these details could ALL become relevant. Maybe the narrative could have been a bit more disciplined.

Suspense? That's what to expect in a spy novel. This one really lays on the suspense -- in the last 100 pages out of 453. Even amidst the late-appearing suspense, though, the two main characters stop for long philosophical discussions. They debate which tactics are moral or right to use to change the world, violence or non-violence. There's a lot of navel-gazing. One spymaster also engages in some of this speculation. His words of wisdom:


"Lying for one’s country is a noble profession as long as one knows what the truth is, but alas I don’t anymore." (p. 422).

My memory of earlier books by John le Carré is that there are never good answers to the moral and philosophical questions that beset his spies, and that there's no such thing as pure idealism. That's the case in this book. Of course there's a surprise ending that I won't spoil.

Le Carré included lots of very clever and insightful passages. I chose just one, because it employed a word, chicanes, that I don't think I have ever seen before. When I looked it up, it seemed like an absolutely perfect word for a particular situation of Mundy, the main character. Immersed in his country, England, he feels himself to be an anxiety-ridden Englishman, Mundy One. Then he boards a plane to somewhere beyond the Berlin Wall:


"But once in the air, all that changes. The fears fall away and a sensation comes over him that is like a kind of grateful peace. Soon Mundy Two is replacing Mundy One. The England he is leaving behind becomes his enemy, and by the time he enters the grim chicanes of whichever East European airport is receiving him, he could almost hug the hard-faced frontier guards, so effectively has he persuaded himself that the pretending is over, he can breathe free air, he is among real friends at last."  (John le Carré. Absolute Friends, p. 249).

Here's the dictionary definition of chicane:


chi·cane n. 1 an artificial narrowing or turn on a road or auto-racing course.
2 DATED (in card games) a hand without cards of one particular suit; a void.
3 ARCHAIC chicanery. ■ v. ARCHAIC employ trickery or chicanery.


Although the old sense of the word chicane -- deception -- is considered archaic, I suspect that the author knew his readers would think of it on reading this passage. Thus he packs in a multiplicity of meanings. Bravo!

More on Life in Isolation

Besides good reading and lots of cooking during our long coronavirus isolation, we've been watching recent movies that we had missed seeing in theaters. For different reasons, we liked both "Miss Fisher and the Crypt of Tears" and "Parasite." We have finished watching the new season of "Ugly Delicious" as well.

I knew chicanery but wasn't familiar with chicane. I wouldn't know any racing terms anyway. :)

Isn't it fun to find a word you don't know and start digging into it? We just did that the other day. I would be inclined to give this a pass but I really appreciate your detailed book reviews. They really give a terrific sense of the book.

Really liked his last one, Agent Running in the Field. It's fairly short, a distillation of all his stories in one novel. I've read his various Smiley novels so many times, and heard them read. LeCarre reads his own works exceptionally well. Spouse got me reading him while we were sitting around Saudi Arabia during GWI. Never read Absolute Friends, spouse suggested I wouldn't much like it, I trust his understanding of my preferences.

I've not read the book, but I do enjoy his writing. Chicane is a word I'm very familiar with as I used to compete in motor sport.

The Cold War. Horrible times and we´re heading towards it again.
Uh-oh, never try to hug... oh, glad thoase times are over!
We were advised to not even look the officers in the eye when getting to the border to Berlin and wait till they sign you, otherwise they take a very good look at your car...
Inetersting, I never knew that word, either.