Detectives and policemen in classic mystery stories usually love their food, if it's mentioned at all. Agatha Christie's Hercule Poirot fusses over his tisanes as much as over his mustache. Robert Parker's Spenser has very refined taste, though he also likes a donut. Tony Hillerman's Joe Leaphorn sometimes eats at the southwestern chain Lotaburger, and he also loves his wife's Indian stew. Mysteries set in Italy by Dona Leon and Andrea Camilleri, and in France by Martin Walker abound with descriptions of local food.

In contrast, in the novel In the Woods, author Tana French features a Detective Ryan, who does not seem to like food much at all. Many of the descriptions of what he ate or what he saw other people eat are downright unappetizing. As in many detective stories, Ryan and his partner Cassie Maddox's long hours of hard work often include stops for food or watching other people eat, but here, food hardly pleases Ryan, who narrates the story. 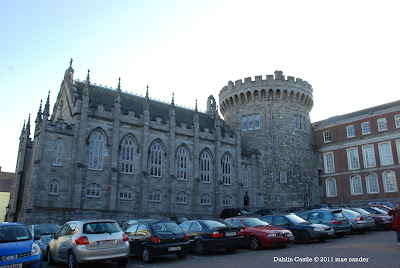 Dublin Castle is the interesting location from which the fictitious Murder Squad works; I remember visiting there on a visit to Dublin in 2011, which made reading the book more fun. I enjoyed the suspense and the tightly constructed plot as well as the psychological thriller aspects of this book: I've become quite a fan of Tana French.

While suspense and detection are the important elements of the book, I was amused by the nonconformist food descriptions. For example, unpleasant sandwiches seem to be a frequent topic of Detective Ryan's disgust. Some examples of food in quick shops or pubs or at home with his flatmate Heather:


"'I said I’m not hungry,' I said, hearing the whine in my voice, but I opened the sandwich anyway: Cassie had a point, it was likely to be a very long day. We sat on the curb, and she pulled a bottle of lemon Coke out of her satchel. The sandwich was officially chicken and stuffing, but it tasted mainly of plastic wrapper, and the Coke was warm and too sweet. I felt slightly sick." (In the Woods, pp. 59-60).

"They were eating toasted sandwiches; the salty, chemical smell made me feel sick. Outside the window the rain bucketed down a gutter." (p. 288).

"I went into the kitchen and started making myself a sandwich, ham and Heather’s low-fat cheese— I’d forgotten to go shopping. The Guinness had left me bloated and uncomfortable." (p. 282).

Other people in the novel sometimes try to please Ryan with food including his mother and a potential witness named Mrs. Fitzgerald. They don't succeed:


"That weekend I went over to my parents’ house for Sunday dinner. ... 'Where’s Cassie today?' my mother asked after dinner. She had made macaroni and cheese— she has some idea that this is my favorite dish (which it may well have been, at some point in my life) and she cooks it, as a small timid expression of sympathy, whenever something in the papers indicates that a case of mine isn’t going well. Even the smell of it makes me claustrophobic and itchy." (p. 277).

"We stopped at Lowry’s and bought Mrs. Fitzgerald a tin of shortbread, to make up for the fact that we still hadn’t found her purse. Big mistake: that generation is compulsively competitive about generosity, and the biscuits meant she had to get a bag of scones out of the freezer and defrost them in the microwave and butter them and decant jam into a battered little dish, while I sat on the edge of her slippery sofa manically jiggling one knee until Cassie gave me a hairy look and I forced myself to stop. I knew I had to eat the damn things, too. ... "'Ah… turned out badly, did he?' Cassie said confidentially. 'Could I take another scone, Mrs. Fitzgerald? These are the nicest ones I’ve had in ages.' They were the only ones she’d had in ages. She dislikes scones on the grounds that they 'don’t taste like food.'" (pp. 300-303).

Just once, under special circumstances, Cassie manages to give Ryan some comfort food:


"Cassie rummaged in the wardrobe, passed me a bottle of brandy and a glass. 'Have a shot of that while I make food. Eggs on toast?'...
"She turned from the frying pan to look at me, a wooden spoon in her hand. ... She switched off the stereo, popped the toast and piled the eggs on top of it. 'Here.' The smell made me realize how hungry I was. I shoveled the food down in huge mouthfuls, barely stopping to breathe; it was whole-grain bread and the eggs were redolent with herbs and spices, and nothing had ever tasted so richly delicious." (p. 396-397).

Tana French is also good at poking a little fun at food fads and snobbery:


"Heather disappeared back into the kitchen, presumably to add horse-sized capsules of vitamin C and echinacea to her frenetically balanced diet. I went into my room and closed the door. I poured myself a drink— I keep a bottle of vodka and one of tonic behind my books, to avoid cozy convivial 'drinkies' with Heather." (pp. 104-105).

"It had been well over a week since I had eaten an actual meal, with food groups and everything." (p. 433).

I'm aware that beyond the more traditional, suspenseful police procedurals and detective stories by authors like Agatha Christie, Dashiell Hammett, Martin Walker, Tony Hillerman as well as Tana French, there is a more recent genre of cozy mysteries. These often feature food to the extent that recipes are included, and frequently include characters who are in the food business as well. I am not much of a fan of cozy mysteries, so this blog post is not in any way about them. However this blog post IS copyright © 2020 by mae sander for this blog: maefood dot blogspot dot com, and if you are reading it elsewhere, it's been pirated.

Do you know "carvalho's recipes".
Here's what the back cover says
"No writer can be held entirely responsible for the conduct of his characters, let alone that of his main character.
Carvalho, for example, has his own side, and his tastes are personal, yet, if we know them, it is only by the grace of my writing. Frequently, readers of the Carvalho series ask me about the reasons for the sometimes excessive attachment that Pepe Carvalho shows to cooking. I have a ready-made answer, an intelligent answer that I claim, but Carvalho has never said a word about it.
In my opinion, cooking is a metaphor for culture. To eat is to kill and ingest a being that has been alive - animal or plant. If we devour the dead animal or the lettuce as it is, some would say we are wild. Now, if we marinate the beast to accommodate it later with Provençal herbs and a glass of old wine, then we have implemented a delicate cultural operation, based equally on brutality and death.
"Montalban has gathered in this volume more than 120 recipes by Pepe Carvalho, with the original texts and simple and precise explanations, to be executed with the brio of the famous private man.

@kwarkito -- As far as I can tell, Carvalho's recipe book is available only in Spanish, though the detective novels have been translated into English, and I've read one. I enjoyed your quote from this book, and I think it does apply to many authors.

never trust a man or a detective who doesn't like his/her food!

I haven't read In the Woods for years, and hadn't thought about Rob in the television series being so skinny, but you have explained it!

I was born in Dublin and visit there every few years. Nothing like a ham sandwich in Ireland, nothing tastes as good.

Huge fan of Tana French!!!!!!!! I even remember the scones incident!

Mae, I am a die hard fan of Tana French and will typically abandon a book if one of hers is published and I can get my hands on. It. Cassie is one of my favorite characters and I liked her very much in The Likeness.

I forgot to add that I’m not a fan of cozy mysteries either. I like some grit and less cutesy.

I thought I had read In the Woods, but from your quotes, realized I hadn't and will have to correct that. Sometimes I do get annoyed by detectives who trudge through life, unable to take proper time out, to enjoy food, beauty and culture or even a decent relationship.

I enjoy mysteries but, like you, don't normally read cozy mysteries unless I am in the mood for a fun read that doesn't take much time or thought.

The lasagne one made me laugh!

Interesting. His dislike of food certainly sets his character, doesn't it?