Wars I have known include the Vietnam War; repeated fighting in Yugoslavia and the Balkans; the 1967, 1973, 1982, and 2006 wars between Israel and various neighbors; the ongoing internal war of Israel with Gaza; the long American conflict in Iraq spilling over into Syria and Iran; conflicts between Turkey, Iran, and the Kurdish  minorities there; sporadic violence between India and Pakistan; and dimly in my memory, the Korean war. Less bloody but pretty dramatic have been the continued anger at Japan by China and Korea for Japan's brutal occupation that ended after World War II; the continuing rivalry between Greece and other countries; and the continuing drama over the former republics of the USSR. Maybe I missed a few! 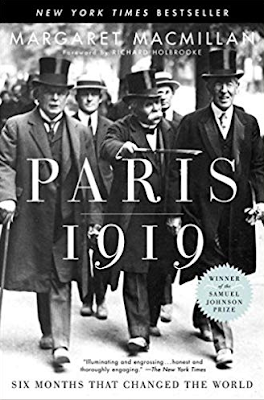 Diplomatic history is a topic that I would say doesn't interest me at all. I usually concentrate on social and economic history. Nevertheless, I found Margaret MacMillan's book Paris 1919: the Months that Changed the World (published 2002) amazingly readable, relatable, and enjoyable: the very detailed explanation of the post-World War I negotiations among a large number of nations was quite fascinating.  In particular, I learned a lot about the background of all those wars I've read about during my lifetime.

Paris 1919 elucidates the deep connections between those wars I have known and the post World War I settlements. I learned much about the creation of the idea of national self-determination, about the rationale for the national boundaries drawn up for Eastern Europe, about the dissolution and redefinition of the territories of the Ottoman Empire, and about the origins of rivalries and resentments between nations in East Asia. The challenge of dealing with a rapidly changing situation during the Russian Revolution was also critical to the story of the 1919 peace process.

Obviously the causes of World War II also go back to the World War I contenders and how they made peace. And World War II indisputably had a major impact on the subsequent conflicts. Still, the background and the consequences of the 1919 peace discussions and agreements explain a great deal of recent international politics.

I especially enjoyed Mac Millan's portrayals of the national leaders and diplomats who took part in the peace negotiations. The heads of state and the lesser diplomats, analysts, proponents of nationalist ideals, and other negotiators are all fascinating. Examples are Woodrow Wilson, Georges Clémenceau, David Lloyd George, Jan Smuts, Ferdinand Foch, Arthur Balfour, Chaim Weizmann, T.E. Lawrence, Herbert Hoover, John Maynard Keynes, and many more. I had heard of many of them, but without much detail.

President Woodrow Wilson's presence throughout the negotiations was extremely important. He had proposed a set of goals: Wilson's Fourteen Points, and had also outlined the ideals for the League of Nations, which many countries hoped would preserve the peace after the treaties were signed. I had definitely never read through those 14 points, which specified the future of many of the world's countries -- and trouble spots. I remembered from the little I learned in school about the American refusal to ratify the League of Nations and the overall peace treaty, but this book greatly increased what I know.

Best of all, MacMillan often presents a capsule of historic reality in a way I find appealing. Here are some quotes that illustrate what I like in the book:


"From Rumania south to Greece, the Ottomans had left their cooking, their customs, their bureaucracy, their corruption and, to a certain extent, their Islam. 'Balkan' had become shorthand for a geographic area but also for a state of mind, and for a history marked by frequent war and intrigue. Their past had taught the peoples of the Balkans, as the proverb has it, that 'the hand that cannot be cut off, must be kissed.' ...As Churchill observed, the Balkans produce more history than they can consume." (p. 111-112)

"It was inevitable that Shantung would attract the interest of outside powers during the general scramble for concessions and influence in China. Its population of some thirty million offered markets and cheap labor.... The Chinese government ... in 1898 signed an agreement giving Germany a ninety-nine-year lease on about a hundred square miles of Chinese territory  around Kiachow harbor. ... The German government lavished money on its new possession... . It enticed German business ... to build a railway and dig mines. ... The navy took charge of the new port at Kiachow. Tsingtao (Qingdao), as it was known, was a model development with superb modern harbor facilities, neatly laid-out paved streets, piped water and sewage, an up-to-date telephone network, German schools, hospitals, and even a brewery that made excellent German beer as it still does today." [The treaty in the end denied China's demand for the return of Shantung, and awarded it to Japan.] (p. 326)

"Britain and France paid a price for their role in the peace settlements in the Middle East. The French never completely pacified Syria, and it never paid for itself. The British pulled back in Iraq and Jordan as quickly as they could, but they found they were stuck with Palestine and an increasingly poisonous atmosphere between Arabs and Jews. The Arab world as a whole never forgot its betrayal and Arab hostility came to focus on the example of Western perfidy nearest at hand, the Zionist presence in Palestine. Arabs also remembered the brief hope of Arab unity at the end of the war. After 1945, those resentments and that hope continued to shape the Middle East." (p. 491)

Will I read more diplomatic history? I don't know, but I really feel the value of this book!


This blog post written by Mae Sander for maefood dot blogspot dot com. © 2020 mae sander
If you read this post at another blog it's been pirated.
Posted by Mae Travels at 1:44 PM

I love history like this and especially related to those two wars. This looks (and sounds from the excerpts) especially well written, not so dry as some. My stack is pretty tall but this looks like one that could find a spot there.

I don't know if I've ever read diplomatic history it sounds dense. You've convinced me this one might be worth trying.