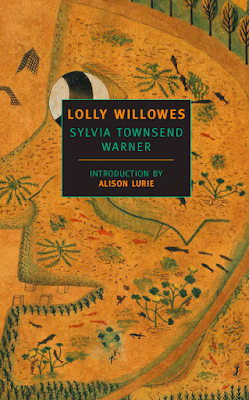 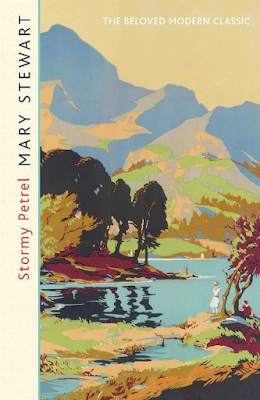 Lolly Willowes by Sylvia Townsend Warner (1893-1978) was a best-seller in 1926 when it was published -- it has the distinction of being the first-ever Book-of-the-Month Club selection. Stormy Petrel, the last novel by Mary Stewart (1916-2014) was maybe less well known than some of her best selling books, but still has a distinguished reputation. I just happened to read them one after the other, and found some interesting similarities. While I liked Lolly Willowes much better, both books are fun — good vacation reading.

The central characters of the two books are single women, who at some point escape to an English village to find some sort of solitude or independence. This of course happens over and over in English novels, but I found some things, like the cozy village foods the women ate, amusingly similar:


“There are some things—mushrooms, for instance, or toasted cheese—which can only be satisfactorily cooked by the eater.”  (Lolly Willowes, p. 110)

“After that Laura was given every evening a glass of home-made wine: dandelion, cowslip, elderberry, ashley, or mangold.” (p. 119)

“Inside that stout little tent was a very efficient camping-gas burner, complete with kettle, billycan, matches, tea bags and powdered milk. And investigating Neil’s stores I found baked beans, sardines, a couple of small tins of ham, and some crispbread. Like the Swiss Family Robinson, I had very little to complain about.” (Stormy Petrel, p. 147)

The descriptions of the villages and way they related to the people around them also have amusing parallels, coming as they do half a century apart, as well as being separated by a major war and other events.


“As far as I could see, there were some eight or nine cottages strung out on a narrow road which circled the bay. The building nearest the jetty was the post office-cum-shop. A home-made notice informed me that it was kept by M. McDougall, who also did bed and breakfasts. Some fifty yards away was a white-washed building surrounded by a stretch of asphalt; the village school, I was to discover, where on alternate Sundays the minister from Tobermory came over to hold a service. A narrow river, little more than a stream, lapsed gently over its stones past the post office. It was spanned by a narrow humpbacked bridge of the picturesque variety that is guaranteed to damage any car that uses it. But, as I had been warned, there were no cars.” (Stormy Petrel, p. 14)

“Moving about her small cold bedroom she suddenly noticed that the wind had fallen, and that it was no longer raining. She pushed aside a corner of the blind and opened the window. The night air was cold and sweet, and the full moon shone high overhead. The sky was cloudless, lovely, and serene; a few stars glistened there like drops of water about to fall. For the first time she was looking at the intricate landscape of rounded hills and scooped valleys which she had chosen for learning by heart. Dark and compact, the beech-woods lay upon the hills. Alighting as noiselessly as an owl, a white cat sprang up on to the garden fence. It glanced from side to side, ran for a yard or two along the top of the fence and jumped off again, going secretly on its way. Laura sighed for happiness. She had no thoughts; her mind was swept as clean and empty as the heavens. For a long time she continued to lean out of the window, forgetting where she was and how she had come there, so unearthly was her contentment.” (Lolly Willowes, p. 111)

The main thing is that the modern woman in the 1992 book Stormy Petrel is already her own woman, with a career and success as a writer. In contrast, Lolly Willowes, center of the 1926 book, has 47 years of being utterly dominated by her family — first her father, then her brother, before she escapes to her village refuge and makes an astonishing discovery about becoming her own woman, which I’ll skip revealing, but which clearly explains why the book is still so famous. I don’t want to belabor this similarity, and the two books have extremely different plots within the similar atmospheres. As I say — nice vacation reading!

I had just purchased The Stormy Petrel but haven’t read it yet. Maybe on this upcoming camping trip.
From the quotes of this book you are sharing I can say I like the writing style.

My wife read Lolly Willowes and loved it.

How fun! I'd like these. Gee, I'd like to live in those villages, at least for awhile.

I'm having fun reading the mysteries of the 1920s/30s from the British Library Classic Mystery series. They hold well (and I see a few similarities, especially in the food!)

One of my fantasies, should I ever find myself single in the future, is to retire to an English village. I suspect that's a result of reading too many novels. These would feed right into it! I was a big fan of Mary Stewart in high school, but I'm not sure if I read Stormy Petrel which was published a decade after I graduated.

They sound like fun, easy reads. Thanks for sharing.