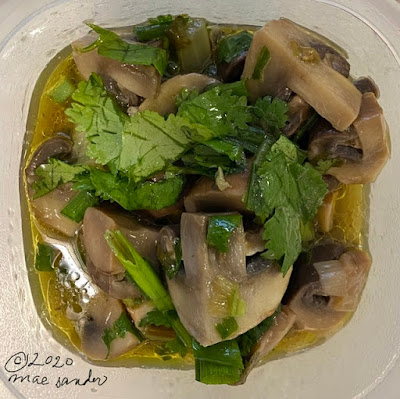 To make Julia Child's recipe for Champignons à la Grecque you begin by making a court bouillon: that is a combination of water, oil, lemon juice, whole spices, and aromatics. You use this broth to cook mushrooms. At the end, you boil down the broth and strain it to use as a light sauce, along with a fresh herb garnish. The finished dish has a very delicate and delicious flavor. This is a classic recipe, though some versions by other chefs include a bit of tomato paste with the other ingredients.

Recently, we made this dish and wondered about the term court bouillon. We could just as well have wondered why a French vegetable preparation is called Greek -- à la grecque. But we know better than to ask about why the French give things the names that they do. A la grecque is just the French term for things cooked in a broth of lemon juice, olive oil, coriander/cilantro, etc. As the New York Times says: "Despite the name, vegetables à la grecque is French through and through." (The article advances the unlikely theory that 15th century refugees from the Ottoman Empire introduced this combination of flavors to the French, but never mind.)

Court bouillon literally means "short stock." It's short, we learned, because of the short time that it's cooked. A standard bouillon includes various vegetables and often meat or bones, and is cooked long and slowly. A "short" or "court" bouillon is cooked quickly, using acid such as lemon juice to extract flavors from aromatic vegetables and spices only, no meat. To quote an article on the Kitchn website:


"Because it’s cooked for a half an hour at most, a court bouillon never reaches the same level of flavor or complexity as a full-term stock. This sounds like a negative, but a court bouillon is actually useful for cooking mild-flavored things like fish or vegetables. In these cases, a full stock would tend to overshadow the natural flavors of the food, but a court bouillon gives just right balance of flavor and delicacy."

This Wordy Wednesday blog post copyright © 2020 mae sander for maefood dot blogspot dot com. If you read this at another site, it's been pirated.
Posted by Mae Travels at 3:30 AM

Thanks for this, Mae. I'm going to have to look that one up. Mastering 1 or 2? No matter -- I'll find it in one or the other -- the image you shared it a clue it's direct from the book!

The sauce sounds very good. But then it has lemon -- so what's not to love?!

Great info! I always wondered what made it Greek and now I know. Hah!

I'm with you, I don't try to understand French food, I just enjoy it LOL