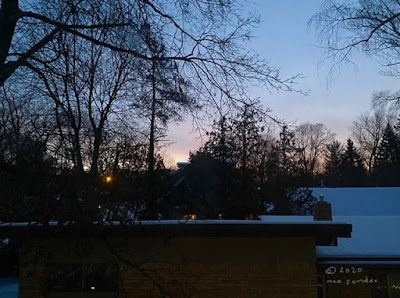 In the East, the sky is becoming a very anemic pink. It’s 7:30 AM in Michigan, mid-winter. Snow, at times mixed with freezing rain, fell all day Saturday, but we’re prepared, here, and the snow removal services both private and municipal made sure we were able to get out of our houses, driveways, and streets. Still, it’s cold and dark —- far below freezing, in fact. Not, however, quite as bad as last year when we had a Polar Vortex. But that could come again.

I've been sort of holed-up in my house reading a long history book, and also starting and not finishing a few other books. It's a new week, now, with new things to think about and to do.


Martin Luther King Day is today. I remember KIng's leadership and his tragic death vividly. I heard him speak three times, and he was a memorable orator in a style that's no longer very current among American leaders (that I know of). Every year on his day there are lots of speeches and articles and marches to say what we learned from his life, what we should have learned, how things have changed, and how things have remained the same. I don't need to repeat this. 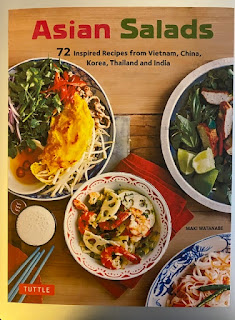 This kind of weather demands comfort food, obviously. I’ve been experimenting with flavors, some new. Not all my experiments are photogenic, though! I’ve bought a second new cookbook by the author Maki Watanabe titled Asian Salads. Like her book Asian Noodles, which I bought a few weeks ago, it explains the ingredients and gives recipes for a variety of interesting dishes. 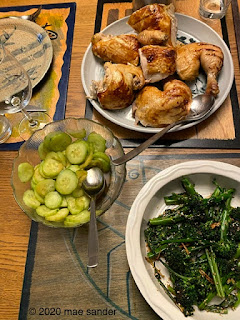 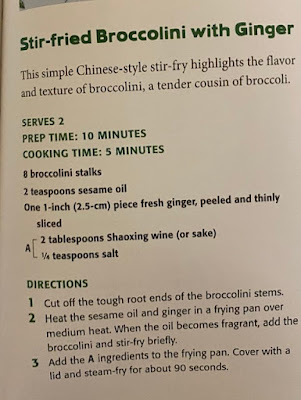 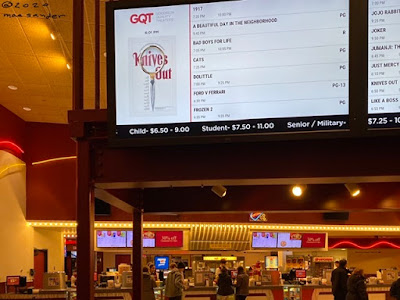 There was nothing that we wanted to do outdoors in the cold grey weather yesterday, so we went to see the recent movie "Knives Out."

It's a very tightly plotted murder mystery with two rather featureless detectives, a very unpleasant set of the victim's relatives, and Daniel Craig.  Craig is a private investigator who doesn't quite know why he's been asked to look into an apparent suicide. Also featured: a creepy, creaky mansion filled with little oddball collectibles that belonged to the dead man. All the actors were just great!

I've been working on this post since the anemic sunrise, and now it's becoming a sunny morning. Maybe a bit of a walk will make this a better day!
Posted by Mae Travels at 8:50 AM

wow lots of snow...this winter is kinda mild over here..well, I am not complaining. LOL I really need some SUN and Vitamin D!!

We loved "Knives Out" also, wish they made more movies like this, good entertaining story, with good actors! Our weather is the same here, with the snow having a sheet of ice on it, very happy we don't have to shovel driveway! But today is gorgeous, sunny, bright blue sky and pretty with the white ground. Wish it were Summer though...

Just a thin layer of "ice" overe here, but I can´t wait for Spring to come along!
It is a shame, but I cannot remember we learned about King in school! All we seemed to hear is about that nasty little Austrian man who destroyed the world once more.
Broccoli with ginger sounds tempting!

Nothing like seeing a good movie on a cold winter day.

What a fun post to step into your world for a bit -- and a fine world it is. And thanks for the good review of Knives Out -- that one has been on the list. (Which is actually getting a bit long.) It sounds fun and gloomy days call for fun!

My sister loved Knives out too. I'm waiting for it to come to on demand.

Love reading about the snow while I enjoy our 75 degree weather in Florida! I saw the movie and we loved it as well.

Looks like a good week to be holed-up. I have been wanting to see Knives Out but I haven't made the time yet. The Asian salad book looks like a winner. too & one I'd use a lot here. ;-)

Sounds much like our week here too! Had broccolini last night.
Rainy weekend now, so we'll be hibernating.

That’s a boat load of snow and cold! I loved living In Michigan but I think I’m very acclimated to warmer temps now. That movie Knives Out looks great. We just watched a trailer of it after I told Doug you all enjoyed it. We both like Daniel Craig. Can’t wait for the library to get it.

We watched Knives Out at Christmas time and enjoyed it.

We like broccolini here too. We often cook it into a steak, mushroom, peas and broccolini dish.