Auguste Escoffier: "Memories of My Life" 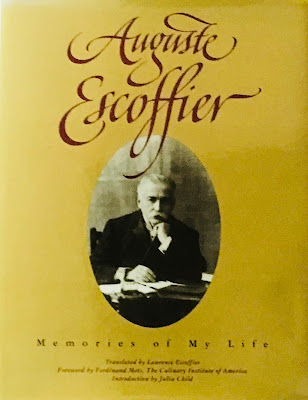 The endless inventions of the famous French chef Auguste Escoffier (1846-1935) include many iconic dishes such as peach Melba and several duck recipes. Escoffier is recognized as the inventor of new restaurant concepts in collaboration with César Ritz (1850-1918), the hotel impressario. In particular, Escoffier was responsible for firmly establishing the custom of à la carte dining where restaurant diners ordered from a menu rather than being served a set meal. His restaurants in several cities were popular with the highest of high society, with European royalty and with other celebrities, notably the Prince of Wales (later King of England); the Kaiser of Germany; author Emile Zola; opera diva Nellie Melba; and actor Sarah Bernhardt. Steamship lines, American hotels, and many restaurants requested the services of Escoffier as a consultant, which he gladly accepted because he wanted to promote fine French food throughout the world.

After Escoffier's death, his grandson created the book Memories of My Life from a number of documents found among his papers. The English translation, published in 1997, contains additional material. Besides all of the well-known accomplishments, Memories documents Escoffier's military service in the Franco-Prussian War (1870-1871), when he cooked for the troops and was taken as a German prisoner of war. He reveals himself to have been a generous person. For example, he arranged to have properly conserved leftover food from a restaurant regularly donated to a charity home where it enabled residents to enjoy an excellent meal. He requested that a tribute fund meant to purchase a gift for him, in honor of his retirement, be donated instead to an old-age home for destitute chefs.

I regret to say that I don't think the recipes in the book are achievable now, at least not as written. Too many truffles, for one thing. Consider the recipe for Mousse de Merlan aux Ecrevisses (fish mousse with shrimp, subtitled "Le Réve de Katinka" in honor of a famous dancer). Besides fish and shrimp, it calls for "a few" sliced truffles to line a mould for the mousse, and then another 125 grams of raw truffles to flavor the sauce -- up to $1000 worth of truffles at current prices.

Besides the cost of truffles, making a mousse by Escoffier's method is very demanding. It requires pressing a mixture of fish and other ingredients through a fine sieve, chilling it on ice, and working in heavy cream. Too much work for me. However, I love the following instructions from the recipe, especially the part about using one's sense of smell:


"While the mousse is cooking, boil 36 large shrimp in a white wine court bouillon. Remove their shells and place the tails in a sauce pan with 2 teaspoons of butter and 125 grams of raw truffles, peeled and sliced, and a little salt and pepper. Cover the saucepan and heat the shrimp for several minutes, until the aroma of the truffles is perfect." (p. 80) 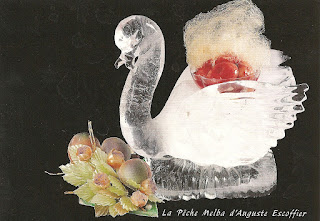 Escoffier's most famous dish is surely Peach Melba, named for the famous soprano Nellie Melba (1861-1931). Escoffier invented it, he wrote, "for the opening of the Carleton Hotel," which was in 1899. He continued:


"I presented her with a dessert of peaches on a bed of vanilla ice cream, covered with a lace of spun sugar, and placed in a silver bowl nestled between the wings of a beautiful swan sculpted out of a large block of ice. The effect was stunning." (p. 115)

It's essential to use "tender and very ripe peaches... and a purée of sugared raspberry." Warnings against substitutions are emphatic:


"Any variation on the recipe ruins the delicate balance of its tastes. ... Some take the liberty of replacing the raspberry purée with strawberry jam or red currant jelly... Others suggest decorating the peach with whipped cream. The results obtained have absolutely nothing to do with the original recipe and could hardly satisfy the palate of a real connoisseur." (p. 116)

In other words, if you want to follow Escoffier, you better get it right! If you see Peach Melba on a menu today, it's probably a peach half (maybe from a can) with red fruit sauce, ice cream, and whipped cream. Escoffier would not approve! A google search for "peach melba" suggests that there's a whole lot of desecration going on.

Escoffier's Memories include only a few of the most notable recipes. A huge number of Escoffier's recipes and techniques, along with many traditional French culinary skills, appeared in 1903 in his immediately classic book: Le Guide culinaire, aide-mémoire de cuisine pratique, translated as The complete guide to the art of modern cookery. Escoffier clearly intended the book as a guide for chefs in fine restaurants, but also he says:


"It is absolutely necessary that waiters be able to answer the questions of any customer wanting to know the content of any dish, without having to ask somebody in the kitchen. Therefore, they need precise information put forth concisely." (p. 172)

Although I've always had the impression that Escoffier was very old-school, and had been superseded by various subsequent styles of French cuisine, I was surprised at how many of his essential ideas still seem relevant at the current times. Wouldn't it be nice if waiters were truly well informed? And if restaurateurs had a social conscience?
Posted by Mae Travels at 11:43 AM

I recently read and reviewed Ritz & Escoffier and enjoyed that dual biography.

I would never order a peach Melba but I would order that original, the swan is divine.

I certainly hope no restaurant that features "Peach Melba" would use canned peaches! But I guess you never know. My husband was recently in a rehab place after back surgery and every meal that featured "fruit" was a sugary mess from a can. I love the ice swan - nice touch for any dessert!

Mae,
Your review was a fascinating read of such eccentricities in dining for the rich and famous! An ice sculptured swan to serve dessert- wow!! You do find very interesting books-

Shame that some foodie stuff doesn't translate well to modern times. Have a great week. Cheers from Carole's Chatter

I love that ice swan!

It looks like a fascinating foodie read. I love that ice swan too. ;-)

It is always interesting to read how restaurants, recipes and styles of dining have evolved over the years.