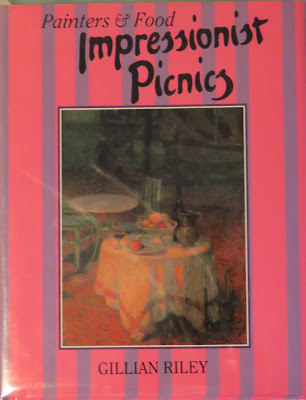 For the first Cookbook Wednesday after months of inactivity, I've chosen the cookbook Impressionist Picnics by food historian Gillian Riley. 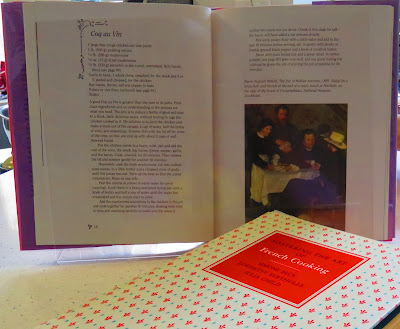 Riley's chapter "Auguste Renoir's Day on the River" begins with his famous painting of a luncheon along the river and the words "They took Paris with them wherever they went."

Renoir, she writes, would enjoy summer weekends on the river with his friends, including his future wife Aline Charigot (wearing a straw hat in the painting above). Riley continues:


"The food was that of the new, fashionable Parisian restaurants, very different from the traditional cooking of country inns like the Auberge of Mère Antoine at Marlotte near Fontainebleau where, back in the 1860s, Renoir had painted a group of young artists in a rustic, unsophisticated setting. A familiar lament was already becoming heard in the land for those unspoilt little places now ruined by trippers, where simple food and a glass of the patron's wine were being replaced by sophisticated menus and décors." (page 17)


Impressionist Picnics is mainly interesting for the images of paintings and the artists' biographic details it offers. However, it does contain recipes, and I chose to make Riley's recipe for Coq au Vin as it appears in the Renoir chapter. When planning how to make the dish, I also checked the Julia Child version of this classic in my much-used copy of Mastering the Art of French Cooking. You can find the recipe online here courtesy of WGBH, the TV station that originally ran "The French Chef" beginning over 50 years ago.

Though Riley's recipe is much more sketchy than Julia Child's, she did make one very useful suggestion, which is to make a red-wine-based stock prior to cooking the chicken, and thus perform the time-consuming reduction of liquid before cooking rather than at the last minute. Riley also suggests a shorter way to prepare the onions; however, I used a bag of frozen pearl onions, which I simply heated in butter until they were golden brown, an even more total shortcut!

No matter how you make coq au vin, it's a labor-intensive dish involving several pots and pans and a lot of time. My total time was something like 3 hours. I began by cutting up a whole chicken. I simmered the backs, wing tips, etc. along with some aromatic vegetables, herb stems, water, and half a bottle of red wine as directed. Then reduced that stock. And this is the quick way. 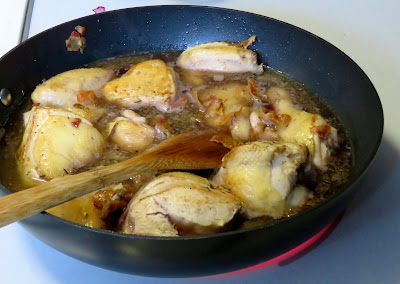 One reason I wanted to use the Impressionist theme for the return of Cookbook Wednesday is that the theme of the book, with its many Impressionist and post-Impressionist paintings, connects to a theme I've been exploring recently -- click to see these posts:

What a wonderful book you have chosen to share for Cookbook Wednesday Mae. Not only does it give a glance into the artist's impressions both artistically and historically, it also includes timely recipes.

I've only attempted Coq au Vin once using Julia Child's recipe. It does take some time to prepare but oh my goodness, it's so worth it. The tip about making the red wine based stock before cooking the chicken is very useful. Any time that can be saved while preparing the dish is most welcome:)

Thank you so much for sharing, Mae and welcome back to Cookbook Wednesday!!!

Making a red wine stock prior to cooking the meal is a great idea. I've never made Coq au Vin but it's on my to do list. Yours looks terrific.

I have bought and read this book. It is great. Today, thank you shared it again.

Wow, this brought a lot of memories back! I remember a college roommate making this at another friend's apartment for a dinner party. It was delicious and I had no idea it was so time consuming! Fun post--and thanks for stopping by and catching my recipe error (which I have fixed)!

What a terrific idea for a cookbook. My husband and I visited the restaurant where Renoir painted this, along the Seine outside of Paris. They still have the striped canopy, but the food wasn't fabulous.
Thanks so much for playing along with Dreaming of France today. I'm delighted that you found a French connection. Here’s my Dreaming of France meme