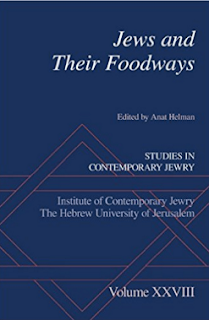 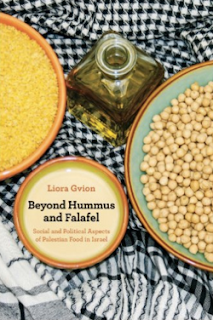 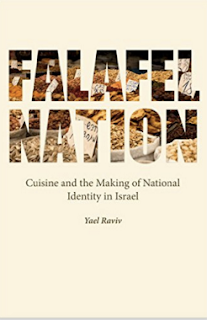 I just read a review of a book I'm really interested in reading when I have more time! Some excerpts from the very intriguing review of one essay in the book:

"Prof. Shaul Stampfer had set out to research what bagels and falafel mean to Jews. But what he discovered on the way surprised him – and goes to the heart of Israeli-Palestinian identity politics. ... Both bagels and falafel are relatively modern inventions, Stampfer discovered. This runs contrary to his initial assumption, as well as to claims that Israelis appropriated falafel from the Palestinians.
...
"Some argue that falafel was an Arab dish that was appropriated by Israeli Jews – an act of cultural appropriation said to mirror other forms of Israeli violence against Palestinians. This argument rests on the assumption that falafel has a long history in the Arab world, and that Jewish immigrants to the Middle East have attempted to disregard or erase its Arab or Palestinian roots by calling it an Israeli food. Until now, a common counter argument was that many Israeli Jews are originally from Arab nations, and their ancestors therefore made falafel, too.

"But Stampfer says that these arguments rest on claims that are simply incorrect. Falafel is too recent a development to have been appropriated by anyone, he writes. Yet many Israelis have accepted the Palestinian claim 'that the Jews living in Israel illegitimately adopted a food of another population.'"
-- "Food Wars: Did Jews Invent Falafel After All," Ha'aretz, December 2, 2015.

Also very interesting: several other recent books deal with the same topic, some of which I have read. Three books:

Hi Mae:)
Oh my, I can definitely see you wanting to dive into these gems! Funny thing, I was doing some research last night looking for tidbits for the year 1966. (I know; why oh why, lol) and I happened upon a note I made stating that bagels didn't truly take hold in this country until the 1960's!

When time allow, I will be delving further into that tidbit for references, lol...

Thank you so much for sharing, Mae...

P.S. In case I don't make it here before Sunday, Mae, Happy Chanukah to You and Yours, hugs Louise:)