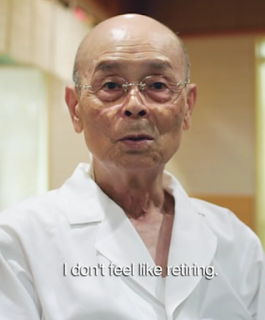 The film describes Jiro's impoverished childhood, his daily life, and his relationship with his sons, apprentices, and customers. Jiro is given credit for innovations in sushi preparation, though I was disappointed that the narrative mentioned no very specific examples of his inventions.
For my recent reading of Bestor's book Tsukiji, link here.
Posted by Mae Travels at 10:13 PM