Tsukiji: The Fish Market at the Center of the World 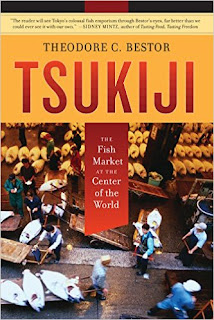 Tsukiji by Theodore Bestor is a classic study of the Tokyo fish market which supplies vast quantities of fish to Japanese restaurants, sushi bars, food shops, and consumers. The market, which is located in central Tokyo, is a famous tourist attraction as well as a wholesale and retail market, especially known for the highly-watched auctions of giant tuna.

I reread Tsukiji for my Culinary History Reading Group's December meeting. I found the author's combination of social observations of the market and economic analysis of how it works to be very clear. His explanations of relevant Japanese history, religious customs, family structure, business practices, foodways, and role of food, especially fish, in Japanese popular culture all fascinated me.

"Seafood," Bestor writes, "is a pillar of Japanese cuisine, and odd bits and pieces of food lore adhere like barnacles to its consumption and preparation." As a result, the collective knowledge of the market traders of Tsukiji encompasses "freshness, visual appeal, seasonality and purity" as well as "the salience of secular seasons and ritual holidays, the aesthetics of food preparation and presentation, the regional identities embodied in specific cuisines or types of seafood, and the delicate balancing of culinary authenticity and national identity with desires for cosmopolitan consumption." Tsukiji traders see themselves as "stewards of Japan's culinary heritage" at the same time that they "live by their economic wits." (pp. 126-128)

Although Bestor's book was published in 2003, it's still quite relevant, though the Tsukiji market will substantially close at the end of 2016. The replacement may change almost everything about it. See: "In Tokyo, Tsukiji Fish Market Braces for an Uncertain Future" (New York Times, November 13, 2015).

I've mentioned this book it a few times before -- all my posts, including this one, here: Tsukiji.

I Am a Cat 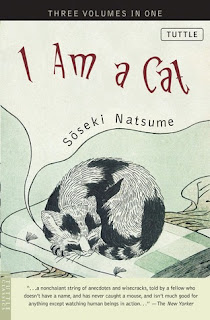 "I AM A CAT. As yet I have no name. I’ve no idea where I was born. All I remember is that I was miaowing in a dampish dark place when, for the first time, I saw a human being. This human being, I heard afterwards, was a member of the most ferocious human species; a shosei, one of those students who, in return for board and lodging, perform small chores about the house. I hear that, on occasion, this species catches, boils, and eats us. However as at that time I lacked all knowledge of such creatures, I did not feel particularly frightened. I simply felt myself floating in the air as I was lifted up lightly on his palm." -- Natsume Soseki, I Am a Cat, p. 3. Tuttle Publishing. Kindle Edition.

So begins the cat-narrator of this series of related stories, published episodically around 110 years ago in Japan. I've read a couple of the early episodes, and don't intend to read it all in one go, but to come back from time to time the way the original readers were able to do.

Did Japanese people eat cats back then? So believes the cat who is telling the tale, but I don't know. And what did cats like the observant but rather naive narrator eat? The unnamed cat tells us:


"Though I am a cat, I eat practically anything. ... I lack the energy to go off raiding fishshops up distant alleys. ... I eat small bits of bread left over by the children, and I lick the jam from bean-jam cakes. Pickles taste awful, but to broaden my experience I once tried a couple of slices of pickled radish. It’s a strange thing but once I’ve tried it, almost anything turns out edible. To say, 'I don’t like that' or 'I don’t like this' is mere extravagant willfulness, and a cat that lives in a teacher’s house should eschew such foolish remarks." (pp. 28-29).

The cat often writes -- without much sympathy -- about what its master eats, what he gives to visitors, and about the master's constant complaints about his poor digestion. Pretension, social status, insincere friendships, selfishness, and other human interactions come up in the cat's narrative. There are occasional mentions of the war with Russia that was ongoing at the time and a variety of literary references.

I enjoyed the book partly because the author does not seem to share the conception of cats that dominates modern internet cat memes and present-day cat lovers. The narrator of I Am a Cat is not a cute, adorable, entertaining kitty with baby-talk captions. This cat speaks in well-formed sentences. When people think he's purring, he is often in fact laughing at them. Maybe this cat is even catty. 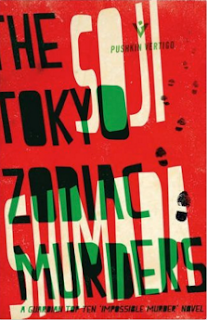 My reaction to The Tokyo Zodiac Murders by Soji Shimada (new edition September, 2015; Japanese original published 1981) was to be disappointed. I found it unbearably contrived and unconvincing, so much so that I don't want to write a longer review. It did not live up to its outstanding reputation or self-image.

The author claims to follow a set of elaborate rules for a mystery story. He purports to give the reader enough clues to solve the mystery. However, the key to the entire solution is based on the shape and format of Japanese Yen notes, which no English-language reader could reasonably be expected to know, so that's spoiled.

Above all, the murder method and the murderer's method of concealment are completely implausible to me. And the arbitrary time-limit for the amateurs to solve the mystery is artificial for the sake of being artificial. But no spoilers here!

As for food in this mystery -- it's entirely conventional. The amateur detectives working 40 years after the murders occasionally stop to cook tempura or eat a kaiseki meal but there's no detail: like many things in the story it's all very rushed and perfunctory.

I often wonder if Lizzie is laughing at me when she purrs. Or grumping at me.I think I'd find the cat book very interesting indeed. And the one on the fish market -- Rick and I were just talking about that and its closing a few days ago.

You do some interesting reading. I think I would very much enjoy being in a culinary book group.

That book about the fish market sounds fascinating!